The Penny Black is (another) cool music venue of Melbourne that’s worth checking out for how it feels to be at, just as much as the actual music. The band action takes place at the front end of the venue, in a dimly lit and cosy space with a bar, tables and stools, couches and cushions. I was there on Friday night, geared up for the Mild Manic and Blue Velvet show and their supports, as part of their East Coast Tour that Depth Magazine proudly co-presented.

The vibe is relaxed and calm, with small groups chatting and drinking as The Palpatines take to the stage. New-to-me, I find myself kind of stunned that this significant sound is coming from a mere two piece. The very chilled duo are just Dan on guitar and vocals, and Mac on drums and vocals behind him. The Palpatines pull off a stream of songs that felt ‘at home’ within me. They seemed warm and questioning, with their grunge rock vibes and fullness of sound. The impressive duo are fully into it, which makes for some great emotional and fun music. Catchy and infectious sounds in our ears, the room feels supporting and accepting as The Palpatines easily shift from surf rock sounding anthems into more romantic interludes. These guys are definitely worth checking out live. 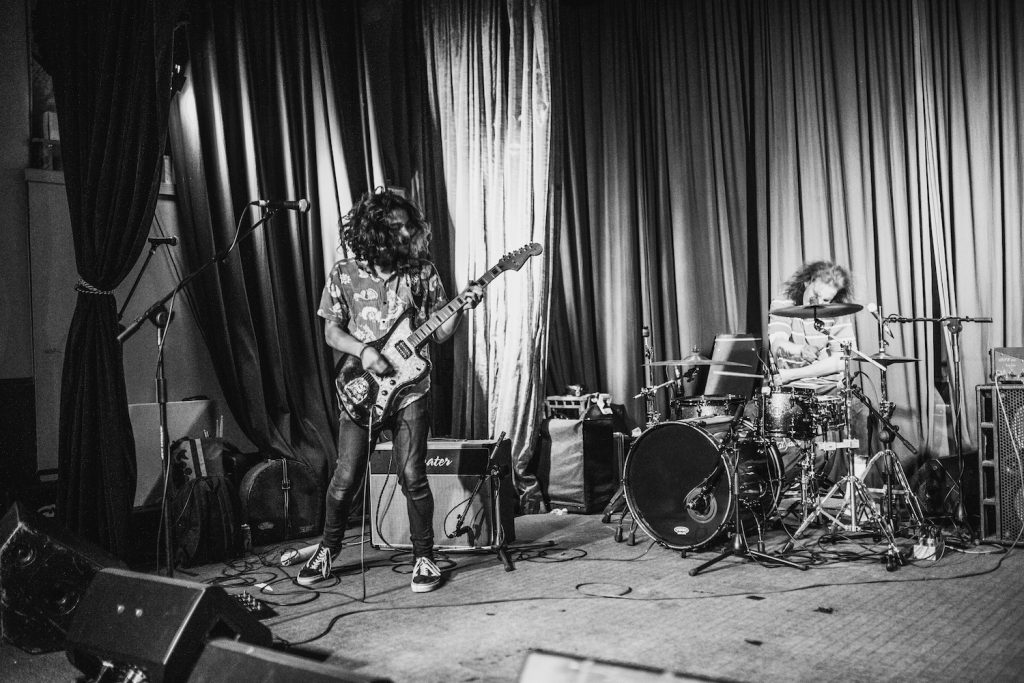 Just About Done followed, and in contrast to the previous set, the five piece feel FULL on stage, and I notice that The Penny Black seems warmer. Vocals seem to have focus with the Melbourne band. Lyrical complexity and intricate rhythms join forces, along with driving guitars and strong beats. Just About Done gave off an “it’ll be okay” vibe of reassurance as they moved through their set, and are passionate and grooving with slick guitar work. They very courageously covered Trophy Eyes‘ “Chlorine” and did a pretty decent job in attempting to honour the emotions encased in the original and very personal track by John Floreani.

In between sets was an opportunity to hang out in the beer garden (and what later became dance central) at the rear of The Penny Black, as well as meeting and talking with familiar and new faces of the scene. Relaxed and happy was the vibe of the night, from end to end, and it was great to be a part of.

Blue Velvet soon took the stage unapologetically and strongly. Their sound leaps out from the stage courtesy of gritty vocals and the organ quality of the synth used. [From conversations later in the evening, I learned that the synth is the pride and joy of frontman Samuel.]

The Sydney band are full of the rich realness of life and all members of the band move and groove on stage with their respective instruments. Solid impressive harmonies and building beats have a warm and attentive crowd lapping up the set, and genuine and frustrated vocals express real-world lyrics, such as “Save Yourself”.

It’s not all angst, as grins and groovy dance breaks courtesy of the synth also play a part in this set, as does a cover of “You’re The One That I Want” (from Grease). With the organ tones being such a central focus point, as well as a distinct gruffness to the vocals, I tongue-in-cheek considered the band to be ‘an angry version of The Doors’. As the band’s latest single “Stay Inside All Day” hit feverish peaks, I gave up prime stool seating because of the infectiousness of the whole room around me moving along to it. “You’re Not Going Home” made for a wild and high energy finish.

Mild Manic‘s set thrust animated storytelling toward us with the Melbourne band’s expressive rock. Hefty anthemic choruses were appreciated with a lot of love from the crowd, as well as there being a whole lot of love and camaraderie between the members on stage. Beautiful melodic moments were just as at home here as hugeness of sound was, and the warm expression felt like a sonic request for being understood.

As the powerful set continued, singalongs were a given and the energy kept climbing. The latest single “Global Threat” was awesome live, with crowd surfing and infectious bass grooves while honest lyrics kept pouring out. Security guards edged closer while the ‘mild maniacs’ of the crowd expressed their blossoming love more loudly and actively. High energy and fiery hot in the band room now, Mild Manic finished with “Mary Does Jane”. It was all wild crowd, instrumental awesomeness, and hectic vibrance, and I truly didn’t want it to end. Mild Manic are unreal live, with their show adding a whole other dimension to their recorded music.

All photos are courtesy of Mitch Strangman, who toured with Mild Manic and Blue Velvet.