Despite the COVID-monster sweeping in during 2020 and stealing opportunities for bands, the music industry machine has rolled on. UNFD in particular seem to be taking the opportunity to explore existing releases for their artists, putting a fresh twist on them. For instance, we’ve seen instrumental releases from Thornhill and Northlane since the 2019 release of their respective albums. But to be honest? None of those releases has had me quite as excited as I was when I saw the tracklisting for Hyperdaze (Redux).

I mean, just look at it. 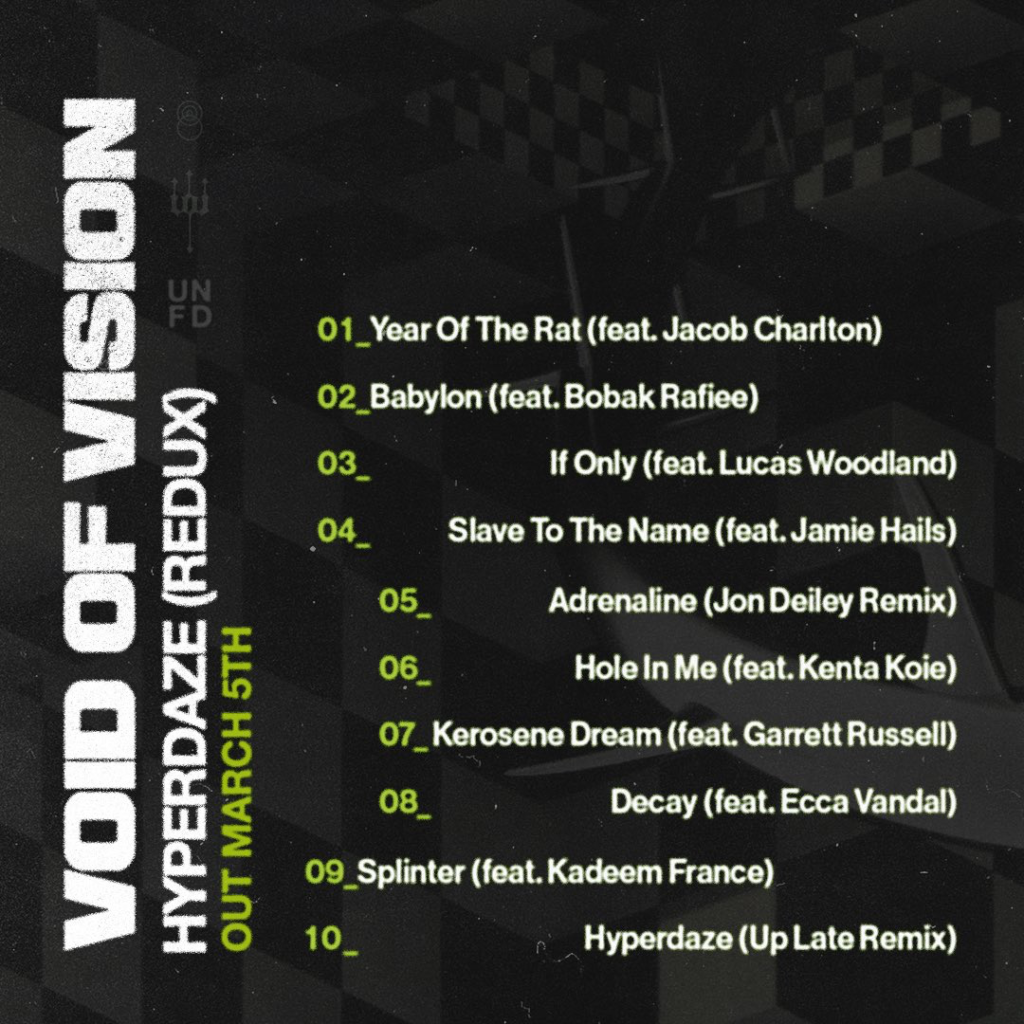 Without even hearing any of these songs, it’s incredibly exciting seeing a full album’s worth of collaborative effort between Void Of Vision and talented musicians of the heavy music scene, both Australian and internationally. With isolation and separation so prevalent when all you want to do is share your music with the world, the unity of collaboration must feel pretty good for these artists right now. I’ve always loved seeing band members backing each other’s continued success instead of competing for some kind of invisible limited accolade.

Intentional or not, the artists in these features give listeners a little bit of everything; reaching into post hardcore, metalcore, alternative/indie, deathcore, and electronic realms. As well as opening up to broader sounds, it’s a cool kind of reciprocal opportunity for Void Of Vision fans to get to know the artists that their band likes, and also inversely for fans of those artists to get to know Void Of Vision. For instance, I honestly can’t say I’d listened to Ecca Vandal previously, but “Decay” has opened my perspective to a kickass musician. Letting genre lines blur to a digital confetti of nothingness is a healthy thing.

On the features, in vocalist Jack Bergin’s words, “The people I hand picked for each track not only bring their own influence on board, but also build on what was already such an emotionally heavy release. It’s fully shaken the album up and spat it out somehow even more powerful than the original. We are super proud that we could create such a bold and collaborative project and still have it translate as we originally intended it to.”

As it’s a bit tricky to ‘review’ an album which isn’t completely new [my Hyperdaze review is here], I’ve decided to not place a rating on this album, but still capture my listening experience and reactions, beginning with “Year Of The Rat”. The opening track sees Thornhill‘s vocalist Jacob Charlton lend his voice to the track. I’m a sucker for ethereal elements of heavy music – floaty experiences melded with crushing ones – and this feels enhanced by Jacob’s presence and falsetto vocals. The track has “Overture” and “Year Of The Rat” combined, presumably due to Jacob singing on both.

Frothing and fierce, the gnashing track soars beautifully at its chorus, with seeds of confrontation planted as it progresses. I’m all ears toward Jacob’s contribution, which acts like a silvery thread through the song, blending well with how abrasive it can be, sonically speaking.

Abrasive times a thousand, Justice For The Damned vocalist Bobak Rafiee is a perfect pick for the hefty “Babylon”. Menacing roars that infiltrate the track give it a nastier bite than it had previously, feeling like they’re a poison coursing through the veins of the song rather than grabbing the bright spotlight. And “Into an empire of dirt” uttered by Bobak before a gutter scraping breakdown is just too perfect for the voice of Dragged Through The Dirt and Pain Is Power.

As my favourite track of Hyperdaze, I’ve gotta say, having Holding Absence‘s vocalist Lucas Woodland appear on this is one of those “Pinch me, is this real!?” kind of moments. It’s a little bizarre to have Lucas’ voice leaping in to this two-steppable and pummeling experience, given the aura of atmospheric post-hardcore or infectious rock that surrounds him and his music. But his presence on the chorus works well in all of its “Dead weight don’t fail me now” desperation, reaching out under torrential percussion and veering into dissonance. More familiar in the pared back moments of vulnerability, combined vocals with Jack work well with the song’s tension, whether together or tag-teamed.

“Slave To The Name” has Polaris vocalist Jamie Hails seem so at home that it could be his own. Was this on The Death of Me?! Feeling far more like a partnership than a ‘feature’, Jamie’s signature fiery yell adds a “fuck yeah” level of brilliance to the track, in particular the “So sick of the sound of my own heartbeat” line. As an equal treat for Polaris and Void Of Vision fans, it feels like this track comes wrapped up in a game-changing energy for the world of heavy music. What else is possible when we work together?

A heartbeat-like pulse takes us into “Adrenaline”, a track that Northlane‘s Jon Deiley had created originally with Void Of Vision, and now sees him give it a fresh remix. More than double the length of the original, the toe-dipping moment now has the opportunity for full expansion. Keeping its same rhythmic bones intact, it’s not grabbingly or distractingly different, but steady and trance-like. I want to know whose voice appears at its ending.

Another favourite of mine from Hyperdaze is “Hole In Me”. Having Crossfaith‘s Kenta Koie appear on the track adds a level of electrified insanity, with heightened roars adding to the unease and drive of the track. Seeming to gain more focus as the mechanised song goes on, Kenta is a good fit for Void Of Vision’s sound, while still being fully himself.

“Kerosene Dream” is a buried and dense track, so it’s one where the vocals have to work hard to break through the hectic unease. Silent Planet‘s frontman Garrett Russell’s voice appears stoically and powerfully alongside Jack’s, and I found myself thinking how it’s kind of fascinating how some features on the album to this point have a larger than life presence of their own, and others feel incredibly organic and part of the fabric of the song. Garrett offers the latter for me with “Kerosene Dream”, and the result is a solid rendition as opposed to an earth-shattering difference.

In contrast to this is “Decay”, where singer-songwriter and rapper Ecca Vandal has made it her own. Full of defiant attitude, the self-destructive track is benefited by the presence of the female voice, having me wish that there’d been more opportunity for women’s’ voices in amongst the male-strong list of features on Hyperdaze (Redux) (as much as I have zero complaints about those who were part of the completed project).

Frankly I can’t get enough of “Decay”, and for me this rendition had the effect of having me see Hyperdaze with fresh eyes. As with “Slave To The Name”, I hope for “Decay” to be a seed-planting moment of change for heavy music; showing the incredible potential of what a female voice can do for a hectic metalcore track, let alone the refreshing concept of looking on the other side of genre boundary lines for collaboration.

Loathe… so hot right now. Endlessly creative, following up I Let It In and It Took Everything with The Things They Believe in the space of a year is an impressive feat, especially during a global pandemic. Vocalist Kadeem France adds his vocal weight to “Splinter”, creeping in to the bleak world of the track and tearing its fabric to shreds. As a whole, the song is mesmerising with its interwoven voices, and adding the liquid ferocity of Kadeem has “Splinter”‘s breakdown hit home even harder.

The most sonically different track has been saved for last. Up Late (Max Pasalic) has well and truly made “Hyperdaze” his own. Bouncing and colourful, with breathy stream-of-consciousness vocals, not to mention a vibrant melodic and emotional chorus, it couldn’t be further from the weighed down “Dedicated to nobody” defeatedness of the original. Still jam packed with fire (is there another vocalist in there?), the track is a favourite for me on Hyperdaze (Redux) because of its reinvention, not to mention generally being a fan of whatever Up Late creates.

I’m not sure how Void Of Vision managed to keep this a secret for so long, but a full album of features is an impressive feat, let alone being potentially groundbreaking. Refreshing Hyperdaze and reminding everyone what the VOV crew are capable of, it’s exciting to see a project like this that could inspire growth and evolution in the world of heavy music. I didn’t expect to feel so inspired and heartwarmed courtesy of what is essentially a bunch of features, but here we are. I’m a big fan of the album and its concept of collaboration and hope for similar projects to come. 😌