It’s no secret that while Depth Mag appreciates heavy music, we emphatically back the melodic and emo heavies more than the guttural roars and deep lows of death metal. So heading into Invasion Fest for the first time was admittedly daunting for us who affectionately cradle emotive songs and feast on lyrical intention. With all of that said (as both a disclaimer and an apology), this was our Invasion Fest 2017 experience. All photos were shot by Rowan Donohue.

There were three sets that were the highlight of the festival for me, and there might have been more if I’d made the 1pm door opening. A ridiculous amount of roadwork slow-downs on the M1 meant I got to Arrow On Swanston far later than intended. I sadly missed Aburden‘s set completely, and only saw the very end of Sleep Talk. The Adelaide band finished off with a powerful rendition of “New Tradition”, which was just as incredible live as the studio version, leaving me frustrated I didn’t see more of them, as well as being determined to see them whenever they tour Melbourne next.

The first of the three highlights was Alpha Wolf. The last show I saw the Melbourne five piece at was Wrangler Studios for the Mono launch, so seeing a huge audience get behind them was exciting. Even before the set started, the crowd was amped up for this. Once they started with “Ward Of The State” there was an instant pit and an army of voices joining in with Alpha Wolf’s vocalist Aidan.

The guys seemed to have had a (masked) stand-in drummer, but it didn’t hold them back at all. Alpha Wolf had us in the palm of their hand through their entire set, with tracks from Mono (“No. 2”, “Failvre”, the two “Golden Fate”s, “#104”), before ending with “Nailbiter”. The set vibed so well, being entertaining and engaging for the crowd, but also emotionally real in the rawness of the messages being shared.

“That was HUGE” said a random Invasion Fest-er on the way out, and I agree.

The second highlight for me was Void Of Vision. The Disturbia EP really brought the goods, and I was impressed to see the five piece pull it off just as powerfully and energetically live. They played “Ghost In The Machine” first, before going into “Grey Area” and covered all of the tracks in their set. “Spite” is as intense as you’d expect.

I noted that the crowd felt ‘alive’ in response to Void Of Vision, and that the band members felt like a solid and unified unit. The clean vocals were off the charts awesome. The band brought breathless intensity, and were mesmerising, keeping the crowd jumping along with them.

The third highlight was Endless Heights. At that point of the day (the second last band of the festival), I had honestly run out of good quality adjectives. In my hand-written notes about Endless Heights are things like “I fucking love E. H.” and “I want to marry that guitar tone”.

But seriously, it’s always a massive pleasure to see Endless Heights and their set at Invasion Fest was no different. They played a mix of older and newer tracks, bringing a solid combination of high intensity and emotionally expressive vibes. It was an incredible blend of active stage presence, that melodic guitar and expressions of their gratitude. 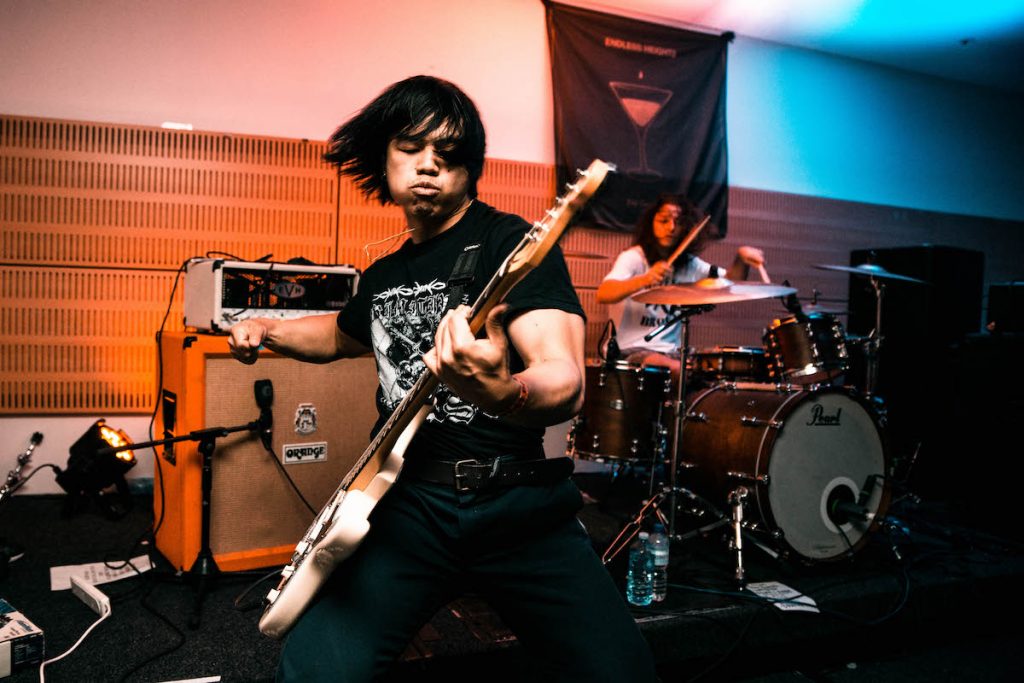 The drums were a highlight, seeming to hold the entire unit together and making those songs we know and love with their recorded version be ‘stretchy’ of possibility in the live setting. The band closed with “Drain”, and I would not have expected moshing or crowd surfing to this, but it was all there, ending their set on a high.

What else went down?

Though those three were my personal highlights, the rest of the bands were amazing, making for a mind-blowing experience with this strong line-up being presented to us.

Newcastle band Eat Your Heart Out‘s set was whole-hearted and real, with vocalist Caitlyn’s voice seeming to reach out to everyone and the band’s strong sound giving a connective experience. They finished up with “Conscience” with Christopher Vernon of Belle Haven filling in the Patrick Miranda feature, along with a whole lot of audience members keen to get their hands on the mic, showing the reach of the single, and the potential of EYHO’s freshly released EP Mind Games.

Honest Crooks offered up relentless intensity, and the hardcore band sought for the crowd to join them. They definitely got their wish, and this set felt like the ‘real’ heaviness of Invasion Fest had truly begun. On the smaller stage, Broken had an instant pit going too, and I was left impressed by the Melbourne band’s sick riffs and their ability to build intensity in their songs, palpable by everyone there.

If you’ve been around Depth Mag in any capacity this year, it’s no secret that I dig Brisbane post-hardcore band Deadlights. So it was extremely satisfying seeing them on the A stage with a decent sized crowd getting behind them. They warmed us up with “Wavelengths”, with “The Mad Scientist” getting things well and truly going, as Dylan asked us to “pulse with him” as one unit. (we tried!) “Invisible Hands” saw out their set and it was signature Deadlights with those perfect harmonies and Josh seeming to be all limbs. New fans were made on the spot, according to the conversations I overheard on my way to stage B.

Outright brought deep and dark riffage, fire drums, and searing screams. The band shared the good news that they’re heading into the studio next month. The impression they left me with was their unstoppable desire to use their voice and presence to speak for those who cannot.

Melodic hardcore Stepson kicked off with fast-paced and raw intensity, before mellowing a touch. The crowd was super into it along with the band, with mic grabs galore, and a huge finish.

Sydney’s Justice For The Damned have had a huge year, with releasing Dragged Through The Dirt and touring overseas. They brought their wall-of-sound heaviness, flooding the crowd from the drums outward. In my notes I wrote ‘Hectic AF’ and ‘drum insanity’ and noticed how loud the audience were with their singalongs, as well as how much they let loose with the aggressive set.

Reactions pulled off a strong set, amping up the crowd at B stage with tracks from their recently released March Of Dissolution. Their intensity left the crowd smoldering, building the energy throughout the set and keeping us hooked with their unique sound.

Perth’s Cursed Earth put on a powerhouse of a set. The vibe was controlled domination via their brand of raw intensity.

In the lead-up to Texas metalcore band Kublai Khan‘s set, I started to more noticeably see people looking weary and worn out. It’s a huge day and a lot of moshing. Regardless, Kublai Khan brought the heat: Riff city, growly rhythmic metal and immense strength as band.

To close out the day was The Acacia Strain. In my depleted state of adjectives and being ‘all heavied out’ if I’m honest (see first paragraph), I wrote down: thunderous, ridiculously heavy, what-the-fuckery, insanity, and gutter hitting heaviness. I think that sums it up and justifies their position atop a heavy music festival line-up.

Invasion Fest 2017 was a huge day. As well as massive respect for these bands bringing their best, I loved that there was a decently sized crowd within an hour of doors opening. By way of the event organisation, the sets were designed to keep things flowing and it worked impressively well, with no waiting time for the audience while bands soundchecked. Festival organiser and ‘captain Invasion’ Ash Hull clearly knows his stuff, and the day flowed smoothly and everyone seemed to be in high spirits because of that fact.

It was also very cool to see bands be thoroughly backed by their label mates/fellow performers who watched from side stage or in the crowd. I never get tired of seeing bands support other bands. As Kublai Khan’s Matt Honeycutt shared, the Australian heavy music scene is alive and well, and experiences like Invasion Fest are irrefutable proof of that aliveness.