It’s so great to have new music from Weighbridge! The Melbourne band, featuring Sean Ross (guitar/vocals), Ethan Taylor (guitar), Josh Godwin (bass), and Jake Leahy (drums), caught our immediate attention with their Limbic Resonance EP. We weren’t alone in our ‘love at first listen’ experience, given the band appeared on stage at UNIFY Gathering 2020. That’s a mighty swift progression, but a well deserved one too, demonstrated by their jaw-dropping performance on the day.

Fresh single “Hole” answers the question as to what Weighbridge have been up to since, but I took the opportunity to speak more specifically with Josh and Sean about how the last year has treated the band. Starting our phone call talking about having a ‘2020 hangover’, it was refreshing to hear that it wasn’t just me who was taking her time; we were all slowly easing into a fresh year and could relate to a vagueness and a “What day is it again?” state of mind.

For Weighbridge, the high of UNIFY Gathering made it even harder when things stopped suddenly due to COVID-19. Sean captured their collective uncertainty, saying “We were starting to pick up some pace, starting to get out there a bit, and then it just hit – like ‘Whoa, what’s happening?!’. We didn’t really know what to do, whether to release music or not, because we didn’t know if it’d go under the radar.”

With swift closure of live music venues, gigs weren’t an option. Josh said “We had a lot of show plans and things booked for 2020, and it just kept getting postponed. Everyone was kind of holding onto the idea that shows could come back really quickly, so it was lots of postponed plans that just ended up becoming indefinitely postponed.. and still are postponed.”  The fact that everyone was in the same boat helped a lot though, having Weighbridge sit back and see how others were approaching the situation.

And everyone handled COVID lockdown in their own way. Even just observing social media accounts, I could see that some bands called it quits, others cocooned, others branched into new areas, and some creatively thrived. Sean talked about how he was needing to find something to do, and Josh felt that having less mental demands by way of music made for a more stress-free relationship with music. Josh says “I probably got a bit more creative. I was listening to more music, I started playing more music, my partner started teaching me piano – which is something I’ve never done before.”

Weighbridge finished recording “Hole” in January 2020, and despite the COVID related interruptions, it seems to just be a thing that Weighbridge have songs up their sleeves for a very long time before they finally see the light. “I know, it’s weird, hey?” said Sean, “We’ve got all these songs in our pocket that we like to sit on for a bit and just let them bubble. And when they’re ready, they come out.”  While I’d assumed this was to do with perfectionism, the guys felt it was a bit of laziness too.  In the case of “Hole”, it has been good to go for some time, ready to be shared alongside a show announcement… which just didn’t happen.

The most obvious and grabbing thing about “Hole” is how its introduction sounds like an old school video game. Sean explained how he has a fuzz pedal which is an old Gameboy that’s been turned into a pedal. “So yeah, I just got the idea from that because it kind of sounds like that when you turn it on. I thought it’d be cool to just chuck that kind of vibe at the start of it.”

Not sure if they’d take the retro game style of sound into music in the future, for me as a Weighbridge fan it was something that worked well, didn’t sound out of place, and didn’t detract from their dynamic and emotional flavour of rock. Both Sean and Josh felt open-minded about Weighbridge’s sound, with no intention to limit themselves, and it being okay for those kind of different ideas to organically find their way into the band’s music.

In response to me asking what drives the creation of a Weighbridge song, Sean shared how it can depend if the song is something more riff-based or melodic, as to whether instrumentation or vocals become the feature point. Sean explained “It’s not like we go for something. We just write a song and wherever it wants to go, we’ll just let it go there.”  With a life of their own, and for being consistently great, it sounds all too easy for them to create musical gems, doesn’t it?

With “Hole”, it feels distinctly like being overcome by a suffocating anxiety, and that it had a heavier mood than the earlier songs the band have released. The song came together in the practice room with the full band, with additional features added in the process of recording. Josh says, “It mostly came together when we were all instruments in hand, standing face-to-face kind of thing.”

On that collective creative process, Sean describes it succinctly: “Mainly Jake and I will write a bit of a song or a rough outline of a song, and we’ll bring it in and jam it and everyone will add the hot sauce on it.”  The band had tried to write remotely during lockdown (where in Melbourne we were limited to travelling within a 5km radius) but they didn’t find it worked as well as they’d hoped. Josh says “I think we definitely do feed off each other face-to-face, so yeah, being outside of each other’s 5km zone was not helpful.”

“Hole” is so far only a standalone single, but may at some point find its way onto a release. The focus for the band now is the upcoming show for Weighbridge at Stay Gold; the band’s first headlining show! Though they’re feeling nervous for this, the guys were reflective that the same venue, roughly two years ago, was when the band had their first gig. “It’s pretty cool to look back”, says Josh.

The guys were also hopeful that with the absence of gigs in 2020 as well as stricter capacity limits that it’ll spark an enthusiasm and commitment in gig-goers that wasn’t quite there previously, such as when people left it to the last minute to decide if they’d go or not. Josh says “It’s really cool now to see so many shows selling so well because everyone’s jumping on tickets. I hope it’s not a novelty and I hope it stays like that for a long time.”  Also international travel limitations, it’s a rare time for Australian bands to take the focus, and Josh described this opportunity as “super cool”, hopeful for Australian talent to be boosted by this. 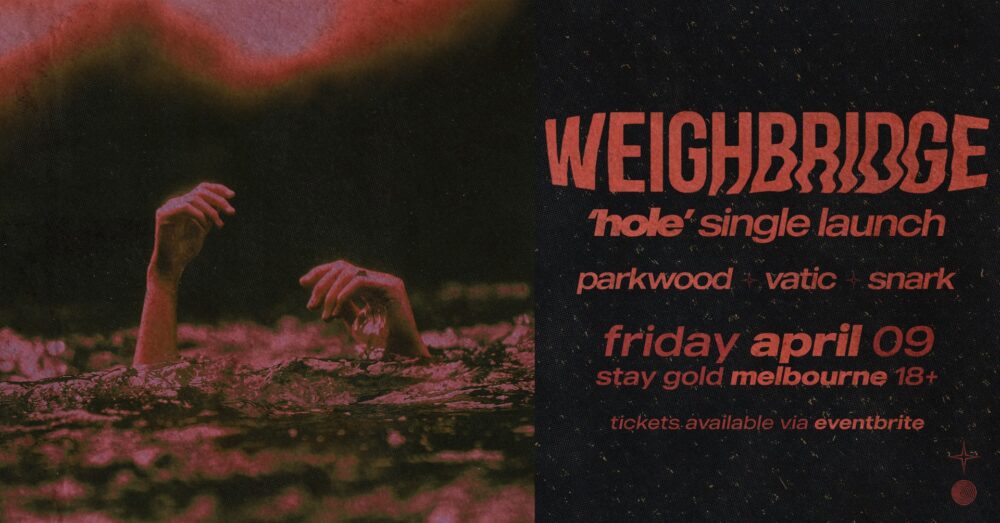 Premiere: Heartline - under the willow