My visits to the Corner Hotel in Richmond, Victoria have typically been for heavy or hardcore shows. The typical flavour for those shows is mostly guys in all black, hanging out relatively solemnly before the show starts and the mosh can begin. So walking in to the band room and seeing disco balls lit up, clothing with colour, and a chatty mostly-female crowd that was excitedly ready before the first band even started was.. different!

Melbourne’s own Between You And Me took to the stage first and the crowd were already quickly into it. The five piece gave off a relaxed vibe, with strong emotion coming via vocalist Jake Wilson. Swaying from relaxed to high energy (including some impressive pop punk jumps), the most engaging part of the band’s set was the dynamic between Jake and bassist James ‘Bassy’ Karagiozis. Clearly there to have a good time, Bassy’s playful energy lifted Jake’s emotional richness and kept things loose and light, with the other band members seeming more present in the more upbeat tracks, having the band seem more united at those moments. Between You And Me gave us a taste of new music from their upcoming debut album, with (the presently-named) “GI Joe” having a gorgeous time change in it. Something to look out for.

The Houston trio of Waterparks were a band I wanted to see, mostly to confirm that frontman/vocalist/guitarist Awsten Knight was not just an ALL CAPS wielding multicoloured fictional character that existed only on social media. He’s real and he exists, as do his superhero sidekicks Geoff Wigington and Otto Wood. The band were strong from the outset, kicking off with “Hawaii (Stay Awake)”. It’s Waterparks’ first time in Australia and they shared how they were overwhelmed by all the beautiful people here, feeling “Stupid For You” about us.

The trio poured their (sweaty) all into the set, which morphed from pop punk high vibes to more intimate acoustic vulnerability. The acoustic “Lucky People” with just Awsten on the stage perfectly tied into a big finish with “21 Questions” with Geoff and Otto returning as the song’s acoustic beginnings expanded into strong sound.

Even though the band was a united group of three, Awsten was fascinating to watch. His manner of theatricism (in his vocals, facial expressions, and banter) made me think if he wasn’t on stage performing his songs all over the world, he’d still be doing just this in his bedroom. The guy is in his element, while still having a good time of it all and not losing his sense of creativity under the lens of fame. He responded to a jibe about the absence of a bass player good-naturedly, and was as real as he was playful. The whole set flowed well and gave the crowd an opportunity to sing along with tracks from new album Entertainment as well as favourites from Double Dare and earlier.

It was clear that for this night that the usual ‘SIDE TO F*CKINN SIDE’, crowd surfing, and moshing I associate with this venue had been swapped out for bouncing, clapping, and hand waving. The vibe was light and fun, even though a sold out show meant the Corner was packed tight and bumping was inevitable when moving around the band room.

I’m not well-versed in Arizona based The Maine. But their ethereal start through fog inspired breath-holding as well as tears in the crowd. The band were in good spirits and it felt like an invitation to join them and just have a good time. 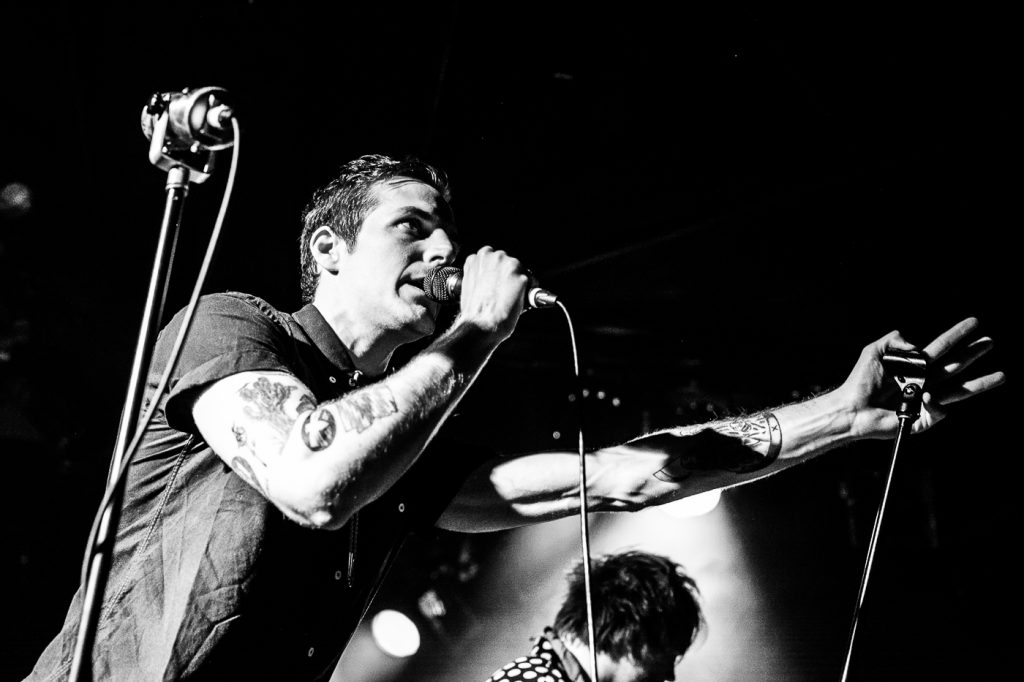 As the set progressed, a vibe of inspiration grew into something more electric. The guitarists Jared Monaco, Kennedy Brock, and Garrett Nickelsen fed us some unified sexy riffage, having us all easily in the palm of The Maine’s hand, whether longtime fan or new to the band. Frontman John O’Callaghan is irresistable and entertaining and knows how to play the crowd. There were several moments where he just played with us, gaining easy engagement with a hype-inducing instrumental backing, having the experience feeling comfortable and reminiscent of an earlier era that I can’t quite put my finger on.

The Maine played along with us, with John donning Australian flag boxer shots that were thrown onto the stage, doing an (unfortunately) obligatory shoey, and inviting crowd member Bailey to sing on stage with them. The Maine encouraged all of us to be free and happy, while also being real and genuine about it. This hard-working band walked their talk too, dominating the stage, leaving us all feeling high and inspired.

All photos of the night were shot by Bree Wallace.