After many repeats of Opera Oblivia, as well as watching their amazing set at Unify Gathering last month, we were keen to know more about Sydney’s Hellions. Guitarist Matt Gravolin kindly answered our questions.

Your set at Unify Gathering was what I’d call ‘a spiritual experience’, feeling like everyone there was along with you for the ride. How was Unify for Hellions?!

What a massive compliment that is, thank you very much. It was other-worldly for us, it was the biggest show we’ve ever played by quite a considerable measure so that in and of itself was very daunting. But hearing the audience sing our words back to us the way that they did was the most validating experience of our lives – Dre and I broke down in tears once we were back in the privacy of our dressing room.

You had Marcus Bridge of Northlane join you for Nightliner Rhapsody, with gorgeous harmonies that we *need* to hear again. I understand that Marcus shared his own cover of the track, but are there any plans to record this heavenly collaboration?

He’s an anomaly, isn’t he?! I’ve never met another person that is capable of doing what he can vocally and I’m astounded every time he opens his mouth to sing. He had indeed shared his own cover of the track but neither he or anyone in our camp had given any consideration to a collaborative recording! perhaps we should! 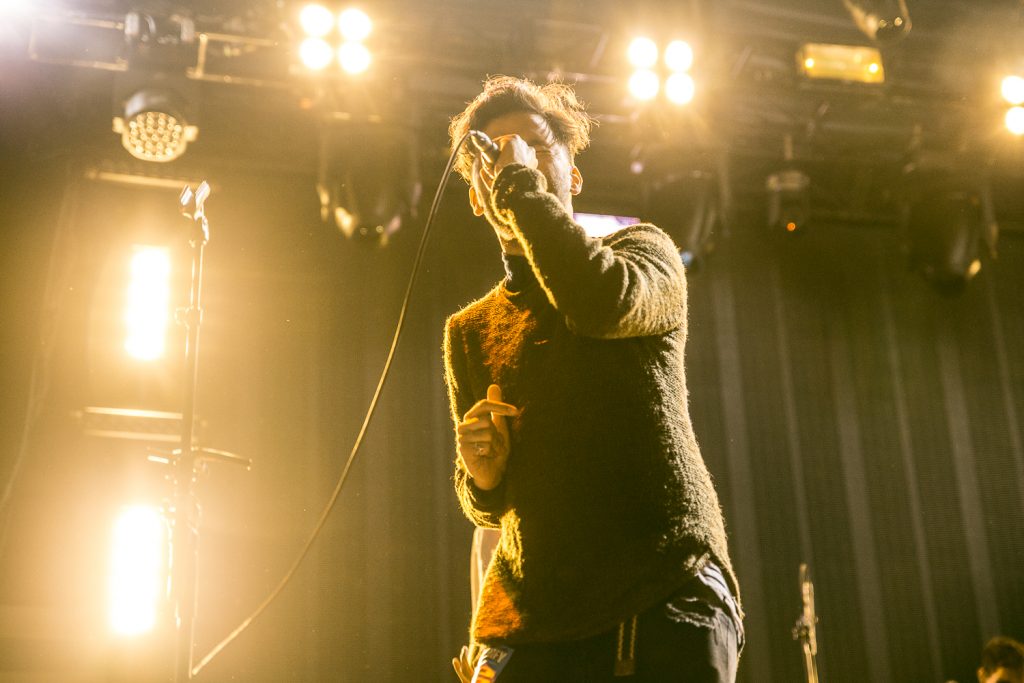 As a member of the audience, the experience was spellbinding at times, with feeling like I was lost in the gentle more instrumental music, and then more forceful at other times, shouting “Fuck you for not being strong enough!” along with the thousands around me. Where on that spectrum does Hellions prefer to ‘live’ most in terms of their sound?

I think I speak for all of us when I say that the latter moments are preferred. That visceral outpouring is so uniting in a live setting. The example you provided in particular always shakes me – to be one with a crowd of people singing “fuck you for not being strong enough”, each holding in their minds eye the memory of a person that has let them down bitterly enough to have been thought of in that moment is a fucking insane thing to experience from the stage perspective.

On that note, by way of genre, you’re so fluid as a band and I don’t think an album like Opera Oblivia would work if you had rigid ideas about genre. Is that a hurdle you’ve in the past come up against and broken through?

There was no conscious effort made to eschew genre containment on Opera Oblivia, but rather to capitalise on the glimpses of theatricality that had pervaded our preceding records. We’ve always embraced non-linearity and we felt it was time to well and truly up the ante over the course of the OO sessions.

To be perfectly honest, my friend, our aim doesn’t extend too much further than ‘don’t fuck up!’.

Your set inspired goosebumps, high vibes as well as tears. What is your aim as a band when you perform live?

To be perfectly honest, my friend, our aim doesn’t extend too much further than ‘don’t fuck up!’. We want to create an energy of freedom and cathartic abandon, but that isn’t something you can force. We try to remain conscious the energy that we bring on to the stage with us as individuals and as a unit and let the performance take its course from there. 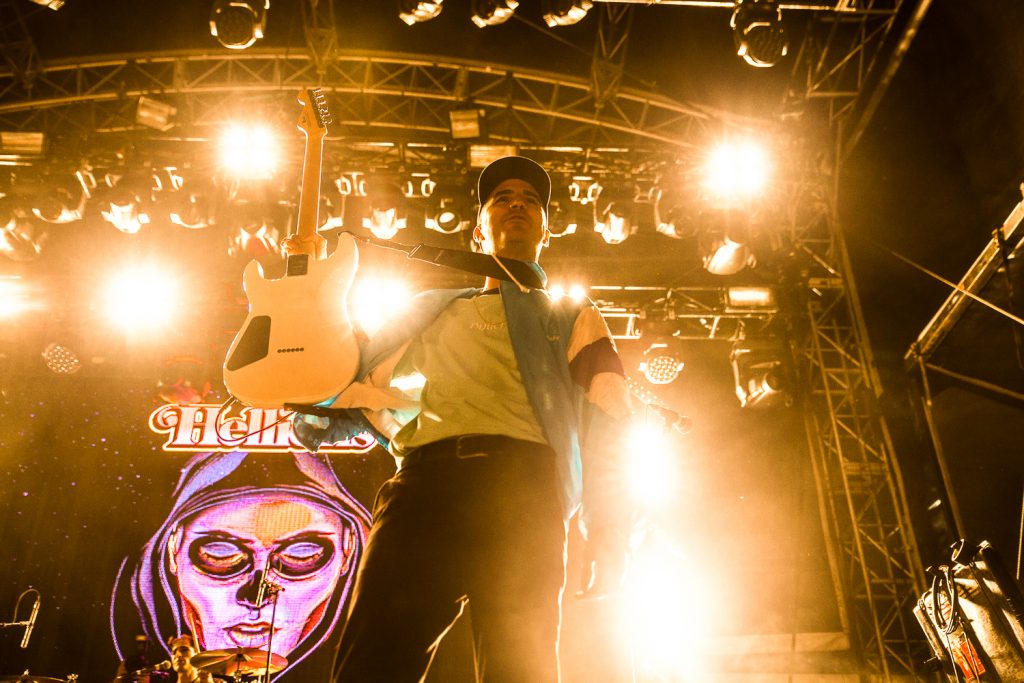 You guys shared the exciting news that an album is DONE and will be on the way this year, as well as the bouncy and vibrant new track ‘X’. I’ve got to ask: How does one follow up a masterpiece like Opera Oblivia?! Was the idea of doing that daunting?

It was indeed quite daunting at times!

We didn’t set any large objective, initially, in order to avoid unnecessary pressure. There must be a completely organic flow present to create honest music.

I’ll start by trying to match present emotions with guitar chords as best as I can until some semblance of a project takes its own shape. The bigger picture will begin to rear its head a couple of months into the blind process.

Will the next album take a similar approach to Opera Oblivia in terms of feeling like ‘acts’? It clearly worked well for you.

It does take a similar approach, but it’s not quite the same!

The theatrical nature of Opera Oblivia is expanded upon further.

In Opera Oblivia, the band tackled topics head-on such as abuse within the church, as well as inspiring people to break free of societal expectations/norms. Will topical/current issues show up in the new album too?

Yes, some topical issues do indeed rear their heads this time around. The idea of breaking free of societal expectation has been a common thread binding the Hellions records together thus far, and this one is no exception. The new record is generally not as specific as OO is, though. It uses broader thematic strokes. It has it’s political moments but generally it is a more personal, introspective piece of work. A little more philosophical, if i may be so bold to say.

The inspiration/hope that you’re sharing in your music is palpable, does this come from a passion to make a difference due to your own experiences? Could you tell us more about what drives you as a band? I mean, I couldn’t believe my ears hearing lyrics like: “Breathe, be still, be free. I was too lost in the way that others perceived me to remember that being oneself was supposed to be easy”. These are inspired messages that you’re sharing in your music; important and powerful, even back in the Die Young album you’ve taken this approach. I’d love to know the pivotal moment(s) behind this beautiful and potent music that Hellions bring to our ears. What is the story? 🙂

Those are beautiful words that I don’t know we’re completely worthy of, thank you very much.

It comes from each of us having experienced some hardship with our mental health (as most people have) and having found the refuge we were seeking, and sometimes even salvation, in music. I guess it could be looked at as us paying it forward, in a sense. We would love to be able to help in the way that we have been helped.

Given that you create music in this way, do you have thoughts or opinions about the music industry and the kinds of music that people typically consume?

I had some ardent and rather stubborn opinions on typically consumed music as a younger man but the truth, as I see it now, is that music is too personal a thing to have an opinion on how another person consumes it. Everyone has a unique relationship with music, I know what works for me and what doesn’t and as much as I don’t understand some types of music, I can always appreciate it for how it serves another person.

Aside from new music, what else is in store for 2018 for Hellions?

You’ll have to wait and see, my friend! A lot of travel, I’m sure.

Listen to and pre-order the new Endless Heights record ‘Vicious Pleasure’, coming out on the 16th of February. You won’t regret it!

Thank you for your time!

(All images of Hellions were taken by Rowan Donohue at Unify Gathering 2018. See more HERE)