Every so often, something clicks in this world. Everything that needs to go right, does go right and every minor coincidence needed to make miracles happen, happens. The Wonder Years are one of those miracles. Now a band in their 14th year, the Pennsylvanian six-piece are gearing up for their first Australian tour since 2016 with the recently released LP Sister Cities under their belts. Depth had a chat with frontman Dan ‘Soupy’ Campbell to talk Sister Cities, along with the band’s upcoming visit down under.

It’s not often that bands get as far in their careers as The Wonder Years have, and out of curiosity I wanted to learn more about what Campbell envisaged for the band in their early, formative years. Explaining his pure disbelief at the band achieving what they have in recent years, he said “in my wildest dreams, this is everything that I ever hoped for”, before going onto to explain that he never thought the band would reach that point. “Now we’ve definitely played over a thousand, we’ve played more than thirty countries if that’s indicative of where it’s been”. A fantastic achievement by any means, congratulations felt necessary. Humble as ever, Campbell simply remarked “we’re very, very lucky”.

It was the vessel for this achievement that I wanted to learn more about, clinging onto Campbell’s mention of all the countries that the band had visited. Sister Cities is littered with references to places across the world- from the title of the album’s opening track “Raining in Kyoto” to the subtle reference to Sydney’s Watamolla Falls in “When The Blue Finally Came”. Wondering whether these were simple lyrical decisions, Campbell replied “there’s definitely memories tied to every place mentioned in the album, and if you’ve picked up the deluxe edition of Sister Cities, the record comes in a sleeve, which slides into the cover of a 200-page book that we put out with the record”. Speaking to how heavily that book related to the album, Campbell cited journal entries, poetry, artefacts and paintings as a “means of painting the entire picture”. “When you hear the songs and read the journal, you can kinda exactly see how I was feeling that night when I sat down to reflect on it”.

Continuing on the importance of perspective for both fans and artists, he clarified that the main goal of Sister Cities was to be more immersive as they questioned themselves “We were thinking what could we do to make the record more multi-layered, more multi-levelled, more multi-dimensional?” Finding these new mediums through the previously mentioned words, photos, paintings among others, he says, “We thought if we expanded into different mediums, we’d be able to go somewhere that we’ve never been able to go before”.

Accompanying the release of Sister Cities, the band also held numerous pop-up shops across the US and UK to celebrate its release. Describing the pop-up shops as another form of immersion for fans, Campbell recounted “We really wanted a place that brought the record to life, you know, so we had the art gallery with all the photos. We had the book on tables with couches and you could just sit down and page through it. We did live performances, we had a curated playlist”. Pausing for a moment to ensure his earphones were still working, he summed the pop-up shops simply, “We just wanted to give an environment to experience the record that added new layers to it”.

So engrossed in the conversation about Sister Cities, I continued to pick his brains on the thematic concerns of the album. Community was a major part of the album, with Campbell confirming “that’s kind of the thesis, right. That’s what Sister Cities rests on”. He continued “We’ve been taught the world is so big and that people are so different, but maybe that’s all crumbling. Maybe the world is not so big, maybe people aren’t too different, maybe we’re more alike than we are taught and we’re more connected than we were ever taught”. With the goal of engendering empathy in others he said, “When you can understand that people are more similar to you than you believe them to be, it’s easier to see them as people and you can see yourself reflected in them. We believe that the world right now could use more empathy and so we’re attempting to engender the world with it”.

Continuing to delve into the motivation behind the band’s sixth album, he explained that the band really aimed to encapsulate that feeling of being on the move in all of the songs. Confirming to him that I believed I had experienced that same feeling, I felt like I could see the smile crawl across his face, despite being on the other side of the world. “We wanted to make the record feel like you’re in a lot of different places at once, and that you’re moving kinda rapidly. If you got that from the record, then that’s mission accomplished from us”.

After asking what the writing process for the record was like, he explained that “it’s really difficult for us to write on the road because of the way we write. A lot of bands have a solo songwriter, but we don’t write like that”. Being together is an integral ingredient for the band’s writing process, with Campbell adding that the ability to write with everybody’s input “helps to make everything feel more communal, which is definitely very cool”.

As our interview time came to a close I turned the attention to the band’s impending set at Good Things in December. Asking about the influence of fan pressure when it came to choosing a setlist he replied, “This is a question that runs parallel to the idea that we have when we write records. I don’t think that these things exist in binary, I think that we can give fans a set they’re gonna love and also a set we’re really gonna enjoy playing”. Confirming that fans would be hearing a wide variety of fan favourites during their set, he continued to inform on how band curate their setlists.

Step One: The New Tunes
With this being the band’s first visit to the country since releasing Sister Cities in April, Campbell was aware that it’d be Australia’s first experience of The Wonder Years in the Sister Cities era. “We wanna play new songs for you!! We know you haven’t heard them before, right. We’ve never gotten the chance to come play “Sister Cities”, “Pyramids of Salt” and “Raining in Kyoto”, these songs haven’t happened in Australia”.

Step Two: The Sentimental Ones
Stressing the importance of giving something back to the fans that have given the band so much, he says, “We also want to give you the songs that you connected to, the songs that made you a fan of the band in the first place. That means we’re going to give you “Passing Through A Screen Door”, and there’s no way we’re not going to play “Cigarettes and Saints”.

Step Three: The Surprise Packet
Uncovering the last step for the band in putting together a memorable set, he explained that the band asks themselves, “What song are they not expecting? What’s going to be a pleasant surprise?”. Providing a helpful anecdote and putting himself in the fan’s perspective, he explained the reaction the band is seeking, hoping that fans leave saying “Damn, I’ve seen The Wonder Years play five times and they’ve never played that song. I’m glad I was here today to see one I’d never heard before”.

As the conversation came to its eventual but unfortunate end, Campbell explained that he really needed to get started on dinner. “It was a pleasure getting to talk to you, I’ll talk to you uhh, at Good Things!”, he remarked. Just as humble as he is talented, I wished him the best with his dinner and ensured him that there is no doubt that I would see him at Good Things too. 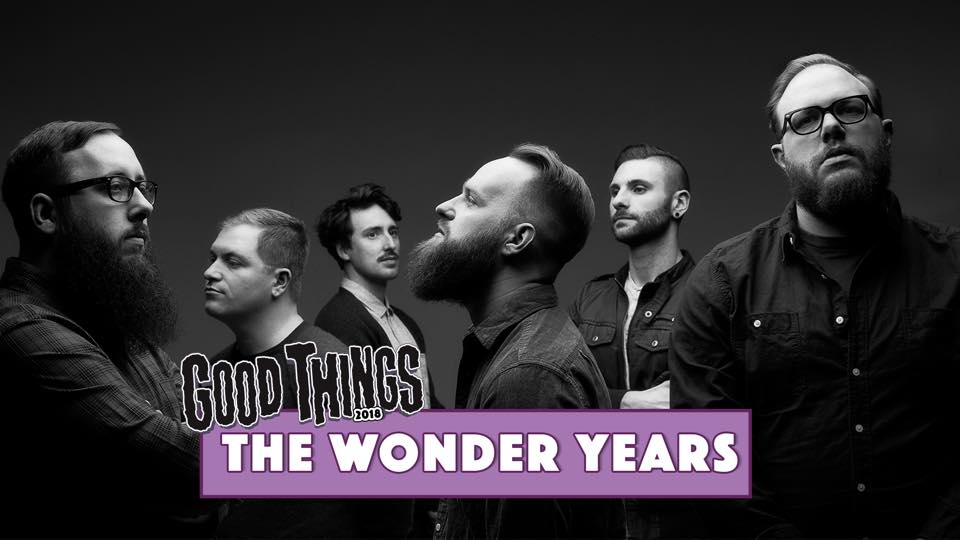