Long Island alternative hardcore band Stray From The Path have just dropped their new album Only Death Is Real, following up the 2015 Subliminal Criminals album. Drew, Craig, Tom and Dragon have brought their signature radical honesty in the ten track album, released on 8th September.

Stray.. have used the metaphor of chess across Only Death Is Real, capturing the fact that they see each of us as pawns in a game, under manipulation by powers that be. From the first track, “The Opening Move”, the metaphor is blatantly apparent.

In “The Opening Move”, Stray.. are expressing, with dissonant and unnerving chords and anticipatory riffs, the fact that us ‘pawns’ are being pitted against each other. With this awareness, of our manipulation, it comes down to a choice that we each are to make: We continue to hate each other, or direct our energies of hatred toward a bigger game that drives the conflict. This one and a half minute ‘are you with us?’ is both a wake-up call and an invitation to pay attention.

Moving into “Loudest In The Room”, the ‘game’ focus is now on war. This second track points at the star-spangledness of glossy Americana and misguided patriotism instead of acknowledging reality. Its an incredulous view on how Americans are willing to go to war to fight something that Stray.. feel is non-existent, nonsensical and not actually the true problem.

“How can you hate someone that you’ve never met before?”

In full-bodied thrashable heavy and roared brilliance, Stray.. express alarm at blind obedience, generally by closed-minded loudmouths, to the extreme of dying for their country.

Along the same lines of blind patriotism is the blindness that Stray.. see in the alt-right movement. I see the third track, “Goodnight Alt-Right” as disbelief that people such as the vocal alt-right leader Richard Spencer even exist, and are allowed/given a voice in modern society.

Lyrically (both literally and with a lyrical homage) Stray.. refer to the Dead Kennedys in this expression of disbelief, given that the punk band delivered their own message in “Nazi Punks Fuck Off” in 1981. Now thirty-six years on, have we learned nothing? Can we say “goodnight” to this hate-based movement yet?

“If you preach hate, then expect hate”

Sonically “Goodnight Alt-Right” is perfection (as each of the tracks have been so far), from the slithering grooves at the introduction to the brashness of the chorus with slick riffs in the meanwhile, the relentlessness of the drums, the alarm-tinged escalation (‘what makes you think..’) courtesy of guitars and drums, and the solidness at the outro (‘Nazi punks fuck off’). Stray.. deliver their messages in a package that’s hard to fault.

Continuing to poke holes in this game going on for us mere pawns, “Let’s Make A Deal” shines a light on the undeniable means of money to manipulate. ‘Everything has its price‘ referring to the fact that people can be bought as a means of this game playing; crafting an agenda outside of what is genuinely occurring, or what should rightfully occur.

“Play the people like a game, they’re a fucking statistic”

The soaring drift into the bridge is incredible, as is the soon-to-follow drop and the subsequent riff-bending and beat shift. This wake-up call is heavenly to the ears and Stray..’s high energy is contagious, despite the sobering messages. “UH! COME ON! YES!”

Can we just stop here and acknowledge the drummer, Craig Reynolds. IN. SANE. I don’t think these tracks would carry their full frantic and in-your-fucking-face energy without all that Craig has brought to them. Impressive as anything, and the following track “They Always Take The Guru” clearly demonstrates his talent.

The intensity created by high speed drumming at the introduction of “They Always Take The Guru” captures the overwhelm in the band members discovering that Architects‘ guitarist Tom Searle had passed away; with the song a dedication toward him as well as Stray..’s own thoughts of their own existence in the wake of his loss. It captures the distaste in creators and innovators like Tom being ‘taken’ and that ‘pieces of shit’ remain and surround us in the world.

The grief is palpable when ‘It’s nights like these that remind me, we’re all temporary’ is sung. It is a hard hitting and powerful tribute.

“Plead The Fifth” draws attention to the idea that news and crimes are set up, in order to manipulate people to believe something specific, according to someone in power’s agenda. We pawns get presented by media the message that benefits the powers that be, in particular race/religion related discrimination, swallowing the idea that we should blindly hate or be suspicious of certain people.

“False pride, world wide
Fake attacks on every front page
In every headline”

The vocal rage throughout the track expresses the fact that the false or deliberately set up news is unseen or just accepted without question. ‘The country pleads the fifth’ by taking this manipulation and charade in silence. But we live in a ‘melting pot’; a multi-cultural society with our own beliefs, and are needing to move to acceptance instead of the fear that ‘the game’ is presenting to us as fact.

Keith Buckley of Every Time I Die joins Stray.. on “Strange Fiction”. This track seems to take a more personal stance of being about someone who doesn’t necessarily fit in to the life that’s going on around them. Discomfort and disbelief rain down in erratic timing and impactful riffs, questioning whether they themselves have the world wrong (‘It’s like I’ve got the wrong pieces to this fucking puzzle’) or if everything else around them is wrong. The idea that “truth is stranger than fiction” sums up the disbelief that seems only natural in the face of the perceived blind obedience of pawns and the manipulation they/we are all under.

“My life’s a plot, so come twist with me”

A shift later in the track takes a more global view, sending a message to back off from the fight that’s happening around them if you don’t get it or are unable to. The fiery ending courtesy of Keith Buckley inspires the sentiment of how much courage and strength is needed for the fight, and to ‘go back inside’ if they don’t have what it takes to stand up against injustices. I’m reminded of the saying: “People who say it cannot be done, should not interrupt those who are doing it”.

Knocked Loose vocalist Bryan Garris joins Drew on “All Day & A Night”. The next stop on the societal chess game train is those pawns that are moved through the prison system. The exchange of money and lack of focus upon genuine rehabilitation is what gets the focus here, the rhythm of the system meaning that the criminals keep finding their way back, and the cycle repeats again and again.

“Just when you think you’re out they pull you back in
‘Cause when it comes to getting better, don’t know where to begin”

There must come a point with this mindset of “truth is stranger than fiction”, that it moves from anger and disbelief into mocking and humour at the transparent insanity of it all; seeming like a game being played for all of the world to see, and yet no one is up in arms about it. The intensity of sound combined with some lighter lyrics (“You got it twisted like licorice”, “Here’s your go-to-jail card”) might make it seem cheesy to some, but is likely a natural progression of intensity when it seems no one’s paying attention. No wonder Stray.. is so loud and direct in their messaging. Garris’ fury is a potent addition here, adding heightened emotion to what Drew expresses more factually.

Elections are an incredibly transparent ‘game’ of manipulation and coercion. “The House Always Wins” focuses on this, and was originally released in the lead-up to the 2016 US elections. The Only Death Is Real version has the added curiosity of a feature by Vinnie Paz (frontman of Jedi Mind Tricks and Army of the Pharaohs, and one half of Heavy Metal Kings). By this point in the album and immersing in the Stray.. reality of how we are presented a false reality and tricked into thinking we have any kind of choice, it’s just a matter of nodding along. Yep. Nodding turns to head banging with the breakdowns and that addictive riff (‘Yo break motherfuckerrrr‘).

“We’re all fucked no matter who we choose”

“Only Death Is Real” is a kickass way to end the album and that opening drum beat is mesmerising. The grungey riffs along with the drum relentlessness create a soundscape of ‘you need to face this’. The lyric similarities with “The Opening Move” pull the album all together, tying back solidly to the originally presented metaphor.

“Only Death Is Real” shines a spotlight on the ‘game’ played where religious beliefs such as eternal life and riches are given as reason to obey the religion and its leaders without question. We’re all dying from the moment we’re born, regardless of what we believe or how hard we pray.

From beginning to end of Only Death Is Real, you can feel the determination and passion to share these observations of fact that course through Stray From The Path. The entire album is musically divine, combining with a roaring solid and factual voice to present an unwavering wake-up call that we need in 2017 more than ever. Only Death Is Real is a ten track collection of songs to inspire a collective upsetting of the game board to inspire change, connection, compassion, and freedom. 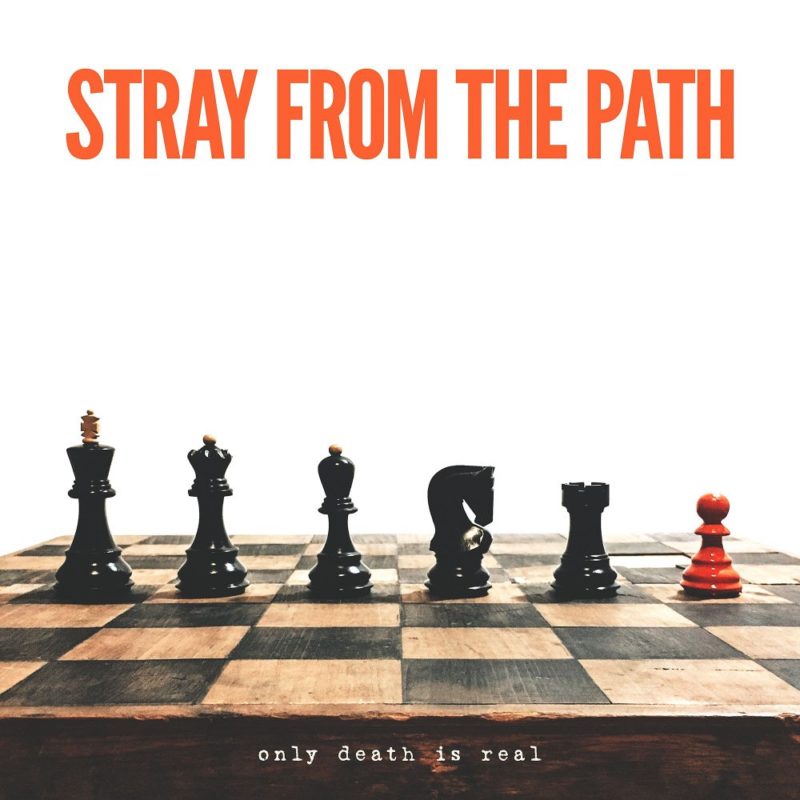 Stray From The Path - Only Death Is Real
The Good

An unwavering voice we need in 2017 more than ever. Divine instrumentation. Solid and roaring expression of truth, even if unpopular.

Message received loud and clear relating to the manipulation/game playing. I wanted to hear the 'next steps' voiced; a light shone on what's beyond the game for those who understand it and see it.

The Comfort - Your Heart (Track Of The Day, 13th September)

Fall Out Boy - The Last Of The Real Ones (New Music)