After a memorable set at the Alpha Wolf show at Northcote Social, we were curious about Melbourne nu metal band Skorched. They conducted their set of the night under the anonymity of masks and with menacing bravado; their defensive image being more upfront and attention grabbing than their music.

A band member of Skorched, under the alias of Khemikal Hazard, answered our questions about the band, their show and their music.

Seeing you guys live, the masks are the most obvious feature of Skorched’s identity. I know individual band members often make choices to ‘mask up’, but when I see a full band do it, it has me curious what is behind it. Care to tell us the story behind the masks?

We wanted to do something different. Obviously, bands exist where some or all the members wear masks, but this is different for us. We wanted to challenge ourselves in terms of putting on a performance and allowing that aspect to become as much a part of the show as the songs. The visual aspect to our live shows is something we want people to be attracted to also.

If you agreed on this together, what drives the ‘pact’?

This wasn’t something we all agreed on collectively. This band started with 3 members then grew, as many bands and ideas do. But all members are down for the cause, meaning that we all share the same belief that the masks hold value in our performance. They allow the music to take over and drive us, rather than us driving the music.

Do you have a kind of manifesto as a band, whether just spoken or otherwise?

We don’t have a written manifesto, or anything engraved into stone as of yet, but you could say our mission statement is to release music that influenced us when we were younger and that was the initial driving force behind most of us getting into music. This in addition to ensuring our shows are entertaining and not just another band running through the motions are very important to us. We want people to walk away feeling as if they’ve watched a band that truly cares about what they do. 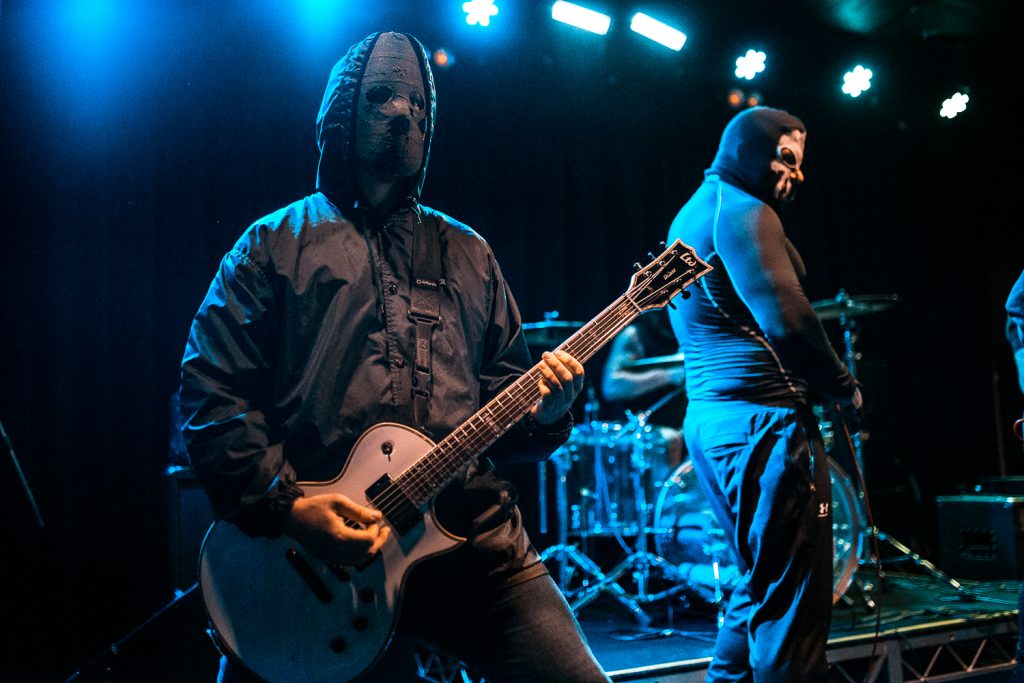 What are your views on the concept of image in music, which has musicians not just make music (like they do best), but almost become PR machines in themselves. What is your take?

There are many various aspects of image in music so it would be hard to answer with a simple yes or no. Obviously image is significant to bands in terms of live shows/artwork/film clips/interviews regarding their craft. It’s human nature to be curious as to who or what is working behind the scenes of anything creative. However, it does become problematic when image involves hourly updates, unimportant personal thoughts and strong political views that aren’t reflected in the art itself. I feel the PR industry has pushed an angle that artist are relatable and normal people like you and me and it’s counterintuitive to art in general. I for one do not want the people I’m influenced by to appear no different than the person who lives next door to me. That is an opposing force to escapism, which many people use music for.

What’s your perspective on whether people can connect with you as a band without seeing you?

Despite not seeing our faces, people are most certainly able to connect to us through our music and our live shows which is most important to the band. We’ve had a big response to our music thus far without people seeing our faces. If that is any indication, I feel comfortable that Skorched is relatable to people in some form. People throughout history have connected themselves to an idea or a movement be that artistic, ideological or otherwise without ever seeing or meeting those responsible for it’s creation.

Is the defensiveness vibe part of this same thing? What is your intention for your audience to get out of seeing your show?

Our stage presence is something that was never formally discussed prior to performing live. I think we collectively express ourselves without any intention or thought on how it might appear to an audience. With that said, we do want the audience to know what they are watching is real. We want our audience to remember the show when they walk out the venue and want to come back next time we are around.

Do you feel like this is something that will potentially evolve? As in, would you ever drop the masks?

Skorched like every band before, will evolve. But the path of our journey is as unknown to us as anyone else. Considering the infancy of this band, there is no intention of ever dropping the masks. There may well be an evolution of the masks themselves. But our faces will remain covered.

There’s a dramatic side to the stage show that Skorched put on, do you feel like you get an opportunity to ‘act’ in these circumstances where you would ordinarily be vulnerably having to be yourselves?

We would express ourselves in the exact same way with or without the masks. People might have misconceptions that the masks give you a feeling of security, but I can assure you that when you’re up on stage performing music, people can still hear you and the masks do not cover for poor musicianship or things going wrong. 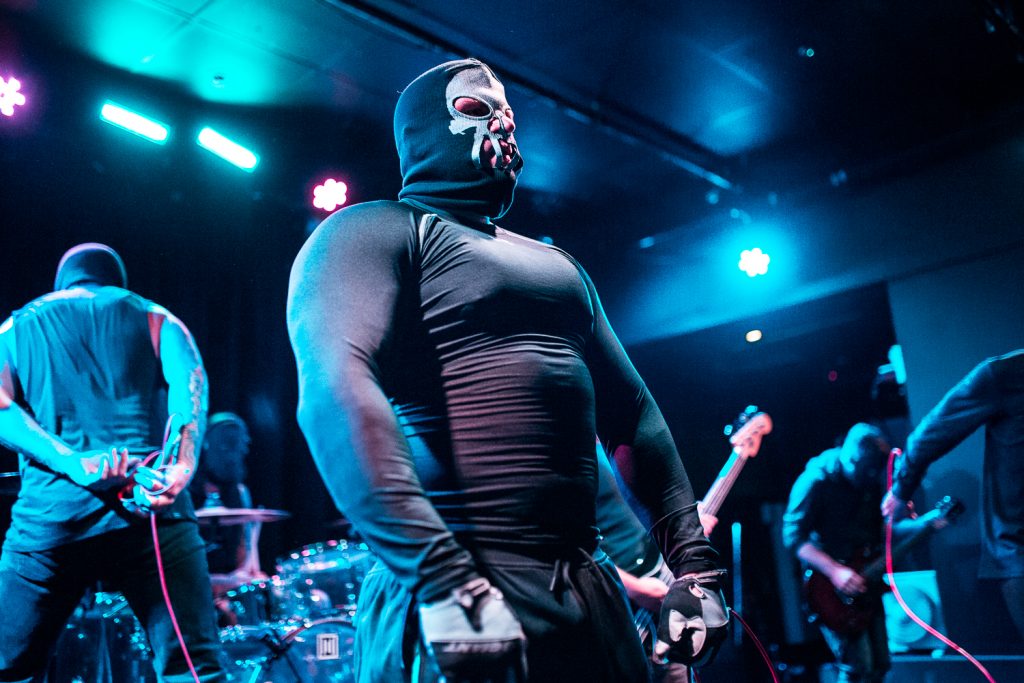 Nu metal gets a bad rap, even though undeniably enjoyable! Are your own musical influences in similar genre bands?

I would be lying if I said we weren’t. As I mentioned we grew up listening to Nu metal and it was undoubtedly responsible for many of the members deciding to get into playing music. That late 90’s early 2000’s sound is something we really enjoy listening to and it’s just as fun to draw influence from.

How is the Minds Taken EP being received so far?

We have so far received great response for our E.P. We are pretty happy with all the positive feedback considering it’s the bands first release. We are looking forward to releasing new music in the coming months.

Would you like to elaborate on the EP and your inspirations behind it? With an admittedly brief listen, I like the sound of it!

Thanks appreciate it. Again, it was very much inspired by that late 90’s – early 2000’s sound that became so taboo. We really just wanted to put something out that we had fun with and was away from the sound of what we’d been hearing in the last few years. This band was an idea that had come up occasionally between us over the last year or two, so you could say the E.P sounds the way it does purely from acting on that idea and not putting any expectations on it. Music tends to come out differently when you haven’t convinced yourself it needs to sound a certain way or appeal to a certain demographic. That attitude is something we’ll take on board every time we write and release music.

Where do you feel you’d like to take Skorched over the next 5 years?

We will continue to release music, with an album coming out later this year and play as many shows and tours as we feel we can perform. We haven’t put any expectations on where to take this band but while it is fun and we enjoy doing it, we’ll continue our journey as a group and see where it takes us.

Stay up to date with Skorched via their Facebook page: https://www.facebook.com/Sk0RCH3D/

Say Anything: Interview with Max Bemis

Stuck Out: Interview with Joshua Walker