Melbourne’s Pagan are back with a new single. “Death Before Disco” is the first from the band in a year, and the first taste of their upcoming album which will release via EVP Recordings.

“Death Before Disco” is immediately addictive, yet also tough to put into words. The track demands attention all the way from its electrified riff introduction through to its growled close. Hectic-edged and amped up to frenzy levels, ice pick vocals seem to want to make measured mince meat of us, akin to a slithering snake who has not yet committed to make us her prey, but is enjoying every moment of the power she has.

The thrashing track is vibrant and threatening, with never ending prowess via drums and guitar and vocal intensity. Just when you think you’ve met the sizeable track, it drops into a bouncing massiveness with even more blistering instrumentation.

As it marches on, melodic hints and backing vocals attempt to shine through what has become a blazing fire, adding to the relentless forces that come together like a very satisfying meal that has you full to the brim yet wanting more.. after another glass of an Italian red maybe.

Yeah, you’ll want to listen to this.

Worshippers new and old of the Pagan cult can show their faith at the upcoming “Holy Communion” party. Pagan ask you to wear white to this event, which includes friends of Pagan in support, as well as a DJ set, all at Northcote Social Club on 20th April. More details on this are on the poster below.

In the meantime, check out “Death Before Disco” via YouTube. We’ve also added the track to our Spotify playlist: The Depth List: 2018. 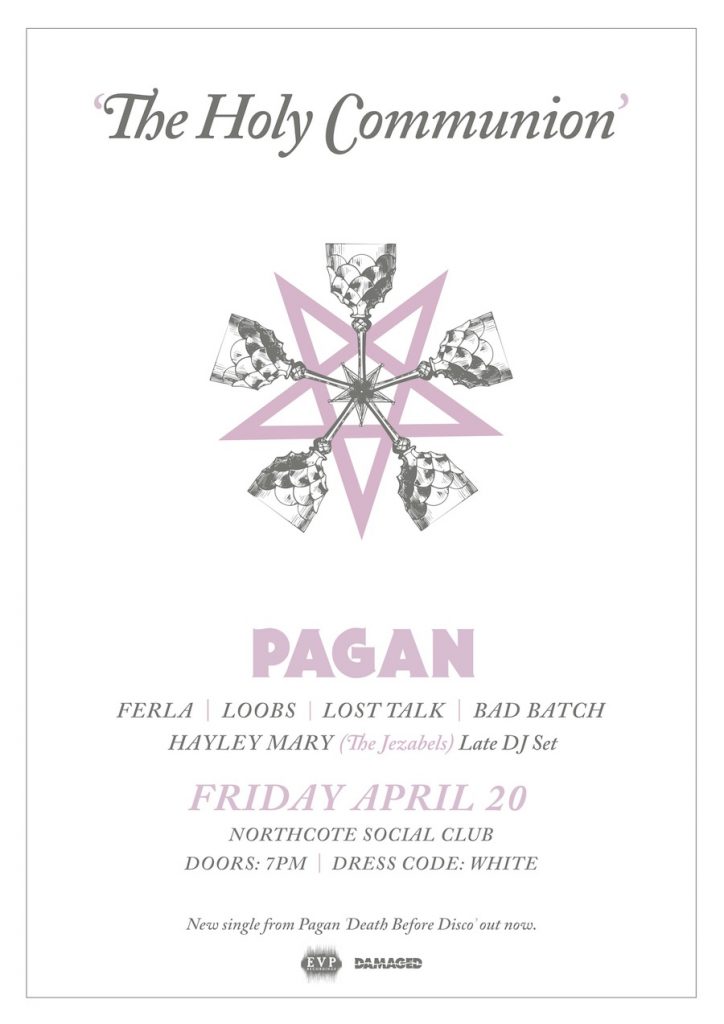