We’ve been waiting for this ever since “Intimate Alien” was released: Ocean Grove‘s new album The Rhapsody Tapes.

Due to their Rhapsody Manifesto, we know that Ocean Grove stand for authentic creativity and with this idea setting our expectations high for something unique, we dove in to The Rhapsody Tapes to review it, track-by-track, hoping that we’d be able to do it justice.

The first track is “What I Love About A Natural Woman”. It’s a mid-air collision of sounds mangling into metallic explosion of sound particles, before a danceable beat reveals itself. Even once a roboticised rap starts, sound collisions and screech riffs are still going on in full force. It’s a massive start and introducion to The Rhapsody Tapes. We are indeed standing on the precipice.

From here we fall head first into the second track, “Beers”, without any space for taking a breath. In sweet exhilaration we hold on for a ride that’s powered by quick-fire drums, heavy riffs that feel both comfortable and victorious, aggressive screams and catchy choruses.

The third track, “Thunderdome”, features Running Touch (studio member). Its sound starts spaciously and darkly, with delicately enunciated vocals, before falling into ‘thrash city’ in a rockin’ chorus. The delicate vocals compete with the heaviness, getting more and more drowned out before a screamed chorus. It’s a perfect blend and works so well. The guitars of the outro are something we could listen to for a long time.

“Intimate Alien” we know and love (remember this?). We’re 90s kids and also 90s Korn fans, so this track’s sexy bassline, electronic melody, heavy chorus, rap sections – it all just works and we are right at home in this track. The vocals and instruments are so noticeably in tune on this track, it feels like they’re ‘singing’ together and are both in focus. I have to say that watching Ocean Grove as a band conduct interviews also gives the same impression of fluid unity.

“Take my hand and please help me understand
We’ll take a futuristic journey through a digital land
And if I can’t explain the doctrines, leave our differences forgotten
There will be much for us to discuss”

“The Wrong Way” is such a gear shift; slowed right down and with a rich acoustic guitar sound inviting us into the track. It’s vocally clear and emotive, and such a difference to the other songs on The Rhapsody Tapes that it’s honestly moving. It inspires us to think about the concept of the rhapsody tapes being forms of music, not necessarily constrained by genre, that express elements of The Rhapsody Manifesto in song. It’s an easy shift though, that doesn’t feel at all jarring, but feels balancing and grounding.

The chorus of “The Wrong Way” has a wide rock ballad sound to it, all while feeling completely authentic (we’ve all heard cheesy rock ballads in our time. This is not that). The second verse of “The Wrong Way” has a Silverchair-esque vibe to it, with slight gravelly tone to the vocals. The song stays solidly on that sound throughout the entire track, which in itself is impressive given that we know Ocean Grove could have amped it up and taken it sideways through a layer of electronics if they wanted to.

[If I wasn’t before this track, this 90s music kid is now seriously falling for this album, and in no way regretting the impulse purchase of the beautiful multi-coloured vinyl version.] 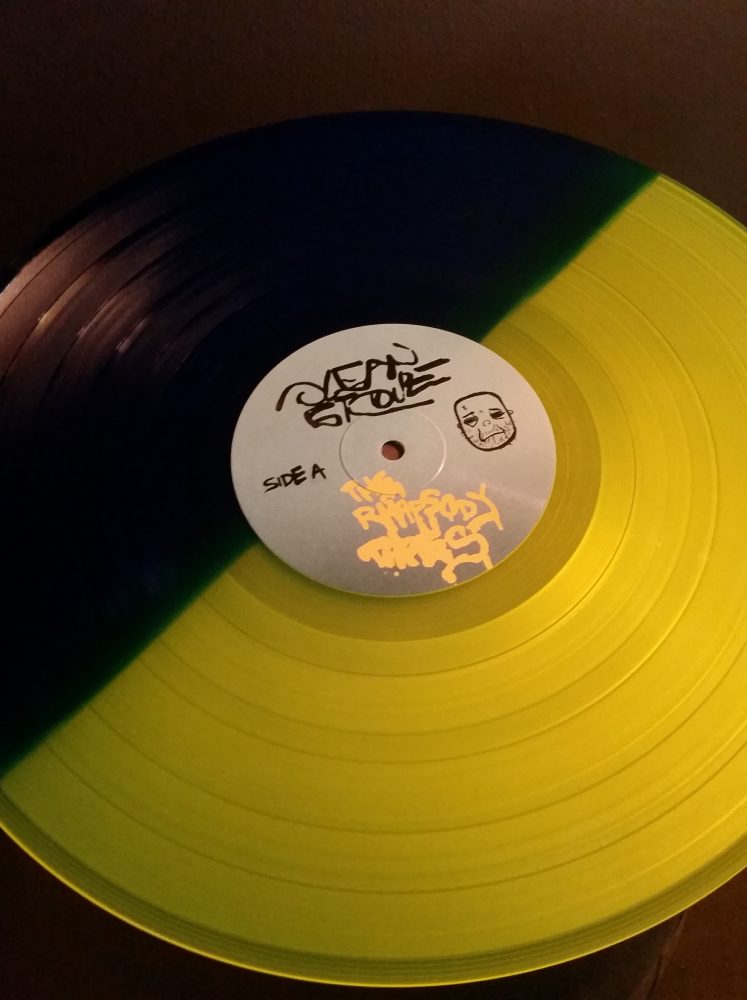 “Slow Soap Soak” is the next track on the album, and golly gosh what do we have here? Shall we turn it up and do laps of Chapel Street? (We might need to put its 1:50 self on repeat) This track feels like a marriage of hip hop with rock drums. “Slow Soap Soak” doesn’t take itself too seriously and is experimental in feel, with crowd effects, brass sounds, a grooving beat, electronic zips and Drake-esque vocals (as well as a whole lot of other sounds!). The drumming keeps the experimentation factor grounded in reality and the track works well as a cool interlude.

The seventh track is “These Boys Light Fires”, which is another one we know and love already due to its earlier release. The heavy hitting and fast paced sound of this track as well as screamed vocals was honestly how I had expected The Rhapsody Tapes to sound. It’s been refreshing to absorb the tracks as they uniquely are, expectations swiftly put to the side.

“These Boys Light Fires” feels like confusion (or at least questions) about where to fit, where to bend to fit and where not to. It comes together impressively and easily with that sense of unity.

The next track, “When You’re This High You Can Say What You Want”, has a raunchy early Stone Temple Pilots feel to it by way of the verse vocals slurred out and distorted (think: “Wet My Bed”). This track has such a grandness of heavy guitar sound though, which together with the background vocals (“La da da da”) and long-held notes and harmonies in the choruses pull it into epic heavy song territory with a clean vocal focus (think: I See Stars) versus the quirky territory where “Wet My Bed” firmly sat. Comparisons aside, it’s a sick track.

“Mr Centipede” is a “wow” track for me. One where you’re sitting and listening and are then taken places you weren’t expecting and just enjoy it for what it is. Wow. The song opens with sombre chords, breathy echoed vocals, a gentle beat and an acoustic guitar sound. Its vibe is constrained, drenched and heavy. Yet from the chorus it opens right up into an arena filling anthemic rock sound. It’s perfectly placed beside “When You’re This High You Can Say What You Want” due to this. The guitars are a stand-out, as are the rap rock vocals, the soaring bridge, the screamed vocals, and outro. Perfect track.

The next track is “From Dalight”, a sharp right hand turn into an alleyway of 2 minutes of sound experimentation and a dance beat. It’s surprisingly smooth once it gets going through an initial wall of gears turning and drink sips and it works.

“Pieces of me fall far from dalight”

“Stratosphere Love” is next and it has an intro that you just feel is the start of something awesomely heavy. We’re not disappointed at all. It’s yet another “wow” track and I feel like going up to everyone I know and strangers on the street, shaking them and telling them to go listen to The Rhapsody Tapes. We love the vocal play, leaning toward a Rage Against The Machine sound.

“A piece of me is slowly dying to make it through.
Secretly I pray so hard now I bet you do too”

“Stratosphere Love” was immediately given repeat listens. The bassline is so good, as are the guitars, the screamed vocals, the more unusual sound elements, and the gusto in which these guys are doing such brilliantly unique music. So in love with this album.

The last track on The Rhapsody Tapes is “Hitachi”. It’s such a smooth track. Quirky of course, but it’s a light ride out of what’s been a wild journey through the last eleven tracks. “Hitachi” is confirmation of what we already have realised in moving through this album: Ocean Grove can face any sound, genre or style and sound as though they’re perfectly at home.

It’s safe to say that we have completely fallen in love with The Rhapsody Tapes and Ocean Grove. This is a unique album which has the feel of being not only a hit with a fan following, but also has the potential of giving broader appeal to Ocean Grove and subsequently more attention to the concept of authentic creativity and openness to different sounds. Highly recommended that this album find its way to everyone’s ears.

Take a listen to The Rhapsody Tapes:

Saviour - The Quiet Calm (Track Of The Day, 3rd February)

Dangerkids - Crawl Your Way Out (Track Of The Day, 4th February)