After immersing in Gravemind‘s recently released “Lifelike”, we were keen to know more about the inspiration behind the band’s music, as well as their unique choices by way of merchandise. Vocalist Dylan Gillies-Parsons gave us the inside scoop of what drives the Melbourne deathcore band.

One impressive feature that has stood out to me about Gravemind, even in relative unfamiliarity with the band, is their attention to detail with the music they release. As a fan of music, it is very cool seeing a band put as much in as fans get out of the music from their favourite bands. I wanted to know what drove these choices.

Dylan spoke on behalf of the band about the importance of authenticity which inspires their attention to detail.  “At the end of the day, we want our audience to believe us. What I mean by that, is, I want them to know that we mean what we say, and we’ve put every bit of thought and taken every precaution with it. Anyone can make music nowadays, and with the right advertisement and manipulation, they can grab the limelight. So I guess what we try to do with this kind of merchandise, and narrative, is give a means for our fans to believe the integrity of the music.”

“At the end of the day, we want our audience to believe us.”

Dylan elaborated on this further, revealing the power and importance of music to him as inspiration to do it right. “It’s become apparent to us, that more and more people are disinterested and disenfranchised with the metal industry, because it is so surface level. We come up with these external ideas so that it’s like holding a magnifying glass under the sun, beaming right onto the music.”

It became clear to me that Dylan is keen for Gravemind to be part of a shifting tide almost, in keeping music as something of a trusted sanctuary due to that authenticity that’s crafted by what a band says, does, creates. “Sometimes when I listen to music, I like to do what I call ‘hanging it up on the song’, which is almost like meditation. I try and reduce myself to the song, push out all external thoughts, doubts and worries, and really hone in on the music. I feel strongly that I can only do this when I know the band means what they do, that it’s something more than just being popular for popular sake, or heavy, just for the sake of being heavy. I want our fans to feel like they can do that more than anything, so for this reason, we take great care in all aspects of Gravemind.”

In watching the music video for new track “Lifelike”, it felt like there was a bigger picture that “Lifelike” may have been part of. Dylan set us straight though, saying “At this stage, “Lifelike” stands on its own, much like “The Death of Teyolia” did. The visual themes and even the vibe of the music may never be repeated.”

I couldn’t not ask about the gorgeous laser embossed wooden box that went along with a limited release of “Lifelike”, as well as a plantable typed lyric sheet. The genius idea echoes “Lifelike”‘s sentiment about mortality, as well as being something amazing for the Gravemind fans. But it wasn’t a focused brainstorming session with the Gravemind collective that inspired the idea, it was a random moment at work: “Funnily enough, the idea to use the seeded paper came from a work meeting actually. I remember looking down at this shonky motivational quote, on a card with seeds in it and just thinking, that’s unreal, I can’t believe I’m having this idea now, here, at fucking work. It all happened in a matter of seconds, how this could perfectly tie into the theme of “Lifelike”.” 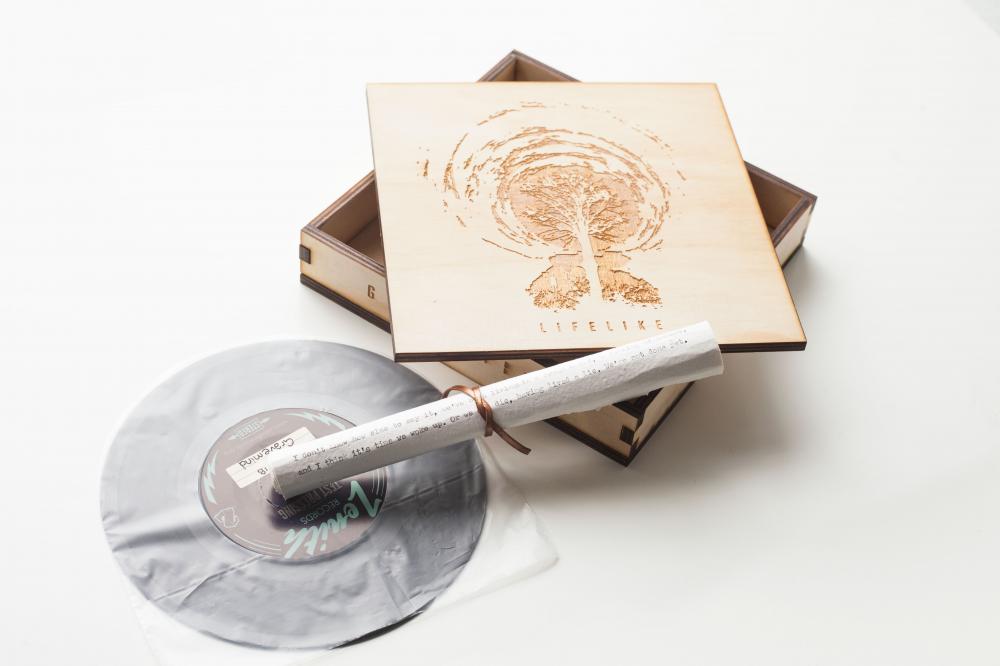 As well as the fan experience in their minds, Gravemind have had narratives richly involved throughout their discography. “We’ve done narratives for every one of our releases, besides Lifelike. The first EP, The Hateful One, I wrote a short narrative, for “The Death of Teyolia”, I wrote the script for a comic book, and got artist Ren Tu to bring that to life, and recorded audio logs for the space man character in The Deathgate with the actor from the Anaesthesia music video, all accessible from the Gravemind website. Story, and external media has been a big part of Gravemind.”

With “Lifelike” and its absence of narrative, Dylan shared that their aim was to “do a 180, and strip narrative in a bid to be more honest with the listener. In previous releases, we’d tucked away the songs real message behind narrative, now it’s right in your face.” He couldn’t say whether Gravemind were going to take the narrative path again, or go down a more straightforward path (which Dylan referred to as an “open letter path”), just that they’ll do what feels right when the time comes.

Considering that I’m not typically a fan of deathcore, and still found “Lifelike” really enjoyable by way of sound, I asked Dylan whether Gravemind’s sound and genre were evolving away from deathcore. In summary, in his words, “we just wrote the damn song!”. He shares, “We didn’t intend on writing a X/Y genre influenced song. Damon wrote the instrumental over a couple of recording sessions and I put my lyrics to it. We didn’t even plan to do cleans before we recorded the track. It’s kind of funny to think, but it’s our least ‘deathcore’ song to date, but it’s also probably one of the heaviest. I remember hearing it for the first time and thinking holy shit. I can’t pull any punches on this.”

I’d seen technology show up in the Gravemind ‘brand’ (in imagery as well as sharing of their content on social media) and asked Dylan for clarification on this. He confirmed that Gravemind are all massive geeks. “The boys are gear freaks, and love getting really specific. We’re also gamers, have been our whole lives. It makes for a much better drive from Melbourne to Brisbane when you can all smash Pokemon at the same time. I guess the tech also comes into the ‘brand’ as well. I’ve directed all of the music videos, do all the social media edits for the band, so I guess my love for sci-fi, and film kind of weasel their way in here and there.”

In terms for the band’s direction and future, Dylan shared wisdom that is 100% apt, despite the unflowery mental image that comes along with it. “We’ve been pushing each other relentlessly for the past three years, and we’re constantly trying to reach that next level. A lot of the time, we don’t know what that is, or the best way to get there. But as a wise man once said, “Keep your eyes on your own dick at the urinal, don’t worry about what anyone else is doing and just focus on your own stream”. One of the funniest analogies I’d ever heard, but bloody right on the money.”

Gravemind are heading out on tour early next month, along with Diamond Construct and 23/19. In terms of whether there’ll be any other new tracks that might make an appearance on tour, Dylan says there won’t be, but after the tour the band will be getting stuck in on the next album.

Catch the guys of Gravemind on their Lifelike Tour! Details below. 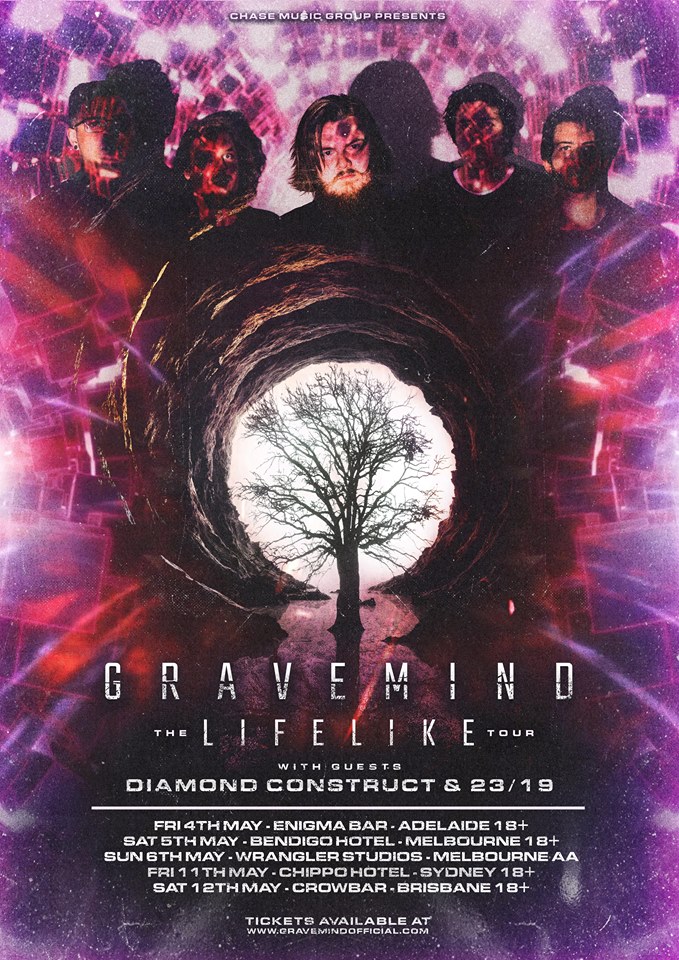