Creating music is a means for someone to express themselves as well as a way to understand life as it goes on around them. It’s powerful in this realness as we recognise our own experiences within songs, feeling understood, sometimes for the first time.

Eliot and the Evening Noose have created a commentary on modern times that is relatable as well as feeling like it is an attempt to understand the messiness of life. The band is a group of three, who are represented in a fictional world they’ve created in their music by comic versions of themselves: Eely Pete (Eliot Peters), Lo G (Christian Logaglio), and Colbonyx (Colby Peters). 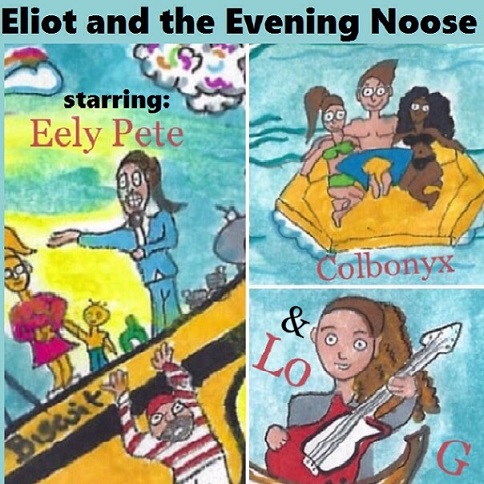 Sing-a-longs for Sinking Ships is Eliot and the Evening Noose’s EP (released 28th January 2017), where Eely Pete sings the news; a raw and real commentary on the current shape of things in society.

“Reporting Live!” is the first on the EP. The sound is a combination of heartwarming children’s song and a harsh dose of reality in a strongly spoken voice. While musically sweet and pretty, it’s most definitely not a song about nice things.

It’s a confronting focus on the darkness of the news, and how it tells us how bad things are, and the sensationalism of it all: “but it’s the news we love!”. An octave change and heavier drums and guitars as the song progresses only makes it hit even more painfully. A heavy-hearted feeling of “What are we doing!?” as a society.

“Like Humans Do” has a country feel to it, and is far too festive for a tune about how human beings get up to all kinds of things, leading to pain, (self) destruction, incarceration, and addiction.

“it’s honest, sad
it’s awful truth
and coming to
a town near you
because we do
just like humans do”

Eliot and the Evening Noose are taking difficult topics that we hear about every day and using an element of humor with it. To me this gives it balance, and feels like a tiny remnant of hope in all this ‘awful truth’ going on.

In listening to this second track, I feel a question of ‘Where is this going?’, in absorbing this rapsheet of humanity’s flaws. Are Eliot and the Evening Noose building up to something in this EP’s story? Or simply reiterating the fact that things do indeed suck.

The third track, “Time To Live” is a sweeter ballad, recounting travels through time. It could have also been called “Century Of Dreams” as Eely is reminiscing on what he’d do over the last one hundred years, moving through decades and experiencing their moments. Yet there’s more to it than that.

He speaks about religions, putting each one on as though it’s the right one, building up into a frustration fuelled expression. There’s this ever-present ‘they’ with expectations, and an ever-present ‘we’ who is just not doing it right. It’s a historical lens upon the human quest for betterness, and the choices and adventures and experiences seeming to always be something to be judged versus just lived. It’s moving and the soaring sound and amplification of feeling takes you with it. Eliot and the Evening Noose have a whole lot of passion.

With the fourth track of the EP, “We’re Not Dead… Yet!”, we’re back in a knee-slapping country-esque feel, but the harmonies and lightness of melody keeping feeling sweetly alternative. It pokes at blind hope, with lashings of alcohol.

“still we drink, drink, drink
to prove that we endured much worse
and to remember that tonight
I’ll be so
much
fucking
happier”

The bridge of this song was the most beautiful surprise, taking us into a floaty dreamscape of harmony and possibility. I can’t help think that we’re in a dreamy booze haze, musically. Pulled back to reality (and the next song) with guitar bereft of sweet lightness of sound.

This collection of songs is quirky as fuck, and full of creative badassery and I love it.

Next is “Last Night”, which is the fallout from that heightened bridge bliss of the previous song. You can’t help feeling sorry as you’re drenched in this musical version of a hangover. It’s the weight of “What am I doing with my life?!” yet due to never matching up to dreams and being confronted by the pain of reality, this is a choice made.

“my body aches
and my arms and legs are sore
I keep on nodding off
and I cannot take much more
then day fades into night
I think I’m ready for a beer
I swear I’ll have just one or two–
right?!”

“Thank You” closes the EP and it feels even heavier, despite the glimmering chimes and sweet guitar. It’s a celebration of friends and good people in amongst this sinking ship of life.

The harmonies are literally goosebump inducing and add magic to the song, as well as that sense of connection. It’s again sombre but at the same time soothing, like “We’re all in this together”.

Eely Pete signs off as reporter for Death News Channel 666, inspiring people to indulge and ‘fuck tomorrow’ in the face of impending doom.

This EP is one of the quirkiest, coolest and most meaningful things I have heard. Eliot and the Evening Noose have charted the adventures of twenty-somethings through perceptions of reality, warts and all, recognition of their place in the world and history, handling the weight of it as well as recovering from their choice of escapism.

This EP is a means to make light of what we’re all going through, on this ball hurtling through space, and what we’re doing to ourselves as humans. The playful element (in story and in feel) eases the confronting truths, giving the opportunity to actually acknowledge what’s going on.

This EP is a trip and highly recommended, and along with sad truths, is really enjoyable and captivating music. Check out Sing-a-longs for Sinking Ships and tell us what you think on Facebook or Twitter.