I’d been waiting for this EP to hit my inbox for review. After falling for “Rest Your Head”‘s introspective imagery of trying to make sense of oneself and their relationship, Better Half‘s Maybe I Was Wrong EP was coming with significant hype from literally all of us on the Depth Mag team.

Long awaited, Maybe I Was Wrong follows on from singles “Mourn” (2016) and “Reasons To Leave” (2015) and is the debut EP for the Melbourne five piece. The announcement of the upcoming release of Maybe I Was Wrong also came along with the news of the band signing to Resist Records.

Better Half began as a side project for Christopher Vernon (known for his role on guitar and vocals in Belle Haven, as well as his extensive work as producer/audio engineer) and Matt Van Duppen (formerly on guitar for Set The Score, and guitar and manager of Thornhill), and grew from there. Ben Guenther (bass), Joel Adams (guitar), and Adam Pinzone (drums) complete the band, which from where I sit seems to have a knack of turning listeners into salivating worshippers at the Better Half altar. People requesting for new Better Half music every time Christopher posted on social media seemed to become meme-like, like ‘Come to Brazil’.

I was really keen to know what the fuss was about, and whether the hype matched reality. With the arrival of Maybe I Was Wrong to my inbox, I cancelled everything and took a track by track adventure with these five songs (that were recorded and mixed at Christopher Vernon’s home studio).

“Fixate” is the first on the EP and soon into it, it’s already a swerving riff and tension -fueled adventure. Humble and honest conversational lyrics take us into the thick of exchanges between two, and a steady pace keeps us pulled along into the rocking tune. The craving of connection with someone who recognises and appreciates who he is is apparent to me. Musically I’m easily won over by the raw vocals, the huge choruses, and the to-die-for bridge which seems like a mental collision of thoughts on this long term connection that has never seemed to work out over the space of four years.

I can already picture the “FIXATE! RELATE! COME BACK TO ME!” of the chorus being screamed back at Better Half in a live setting. The frustrated and pleading track includes the “Maybe I was wrong” statement, and I’m curious to understand this more as a ‘theme’ of sorts as the EP goes on; seeming like it could be taken as both a mind-change for growth as well as vulnerability.

We flow straight into “Stop” which is hugeness by way of guitar and I’m already ‘YES’-ing on this song due to this factor. The guys of Better Half might cringe at this comparison, but I’m going to go there anyway: Back before Foo Fighters were a stadium-filling, pub-sing-along kind of band (ie. their 1995 self-titled album), these same qualities – catchy and relentless riff and drum hugeness with grittiness, real ‘what you see is what you get’ vocals in verses, and huge vocally raw and all-in expansive choruses – were what I loved about them, and is also what I’m appreciating about Better Half’s sound. But back to “Stop”…

Overwhelm is apparent in this confession of a track, where someone is having an intense and tough time and refusing help; not wanting to be seen as a charity case. When the noise of the overwhelm drops, “Stop” leads into a quick build-up where raw frustration spills out. There’s yet another impressive bridge (or is it considered the outro?) where soaring guitar, raw screams, That Riff, and thrashing beats, and again it’s clear to me that this ‘wow’ track will be wildly appreciated live.

The third track “North” begins with a moment of vulnerability and breath taking after the previous intensity. My thoughts go to the album title and how that might tie in. Realisations abound in how he was wrong in being able to trust the presence of people you love, despite distance. The quietness bursts out into rock and noisy guitars seem to take over the entire track. We’re taken into the bathroom in our mind’s eye, watching Jack Daniels set fire to his throat on the way down as he tries to drown out what he doesn’t want to feel or think about anymore.

“Now there’s nothing left to do
except lay in my bed and cry about it.
I always fucking cry about it”

Raw emotional pain is here then, in the dark bedroom of depression, where you’re both feeling bad and not wanting to neglect or hurt those you love (and that neglect turns into something else you’re doing wrong in your depressed state). Escaping everything and everyone by ‘heading North’ seems like a solution to this emotional torment. Ominous and driving riffs blanket the track at the bridge, feeling like “Okay, I’m ready to talk”. Admissions of fear and honesty, courtesy of searing vocals, cut like a knife. The desire to leave everything behind is palpable here, and it’s another impressive track.

The single “Rest Your Head” is fourth in the EP. It’s a satisfyingly crashing experience where we’re existing inside our narrator’s/Christopher’s head as thoughts jangle around. Wailing guitar and observations in the darkness, coupled with building riffs leading into an anthemic chorus is just too good. The looming end of their relationship lurks like a growing shadow, even though in reality the two lay quietly together.

As time goes on, the anguish about this connection crumbling seems consuming, reflected in the ache and noise of guitars and drums. Drowning in layers of voice and sound is a fitting end to this track where something solid and grounding is needed in amongst the what-ifs and things moving out of reach. As a side note: ‘She’s fast asleep and she’ll never KNOW‘ is a stand-out part of this song that hits just right in all senses, based on where it sits in the song and also how it’s expressed.

“All I need is some ground underneath my feet”

“Reasons To Leave” is the last track of Maybe I Was Wrong. From its static riffed introduction with grooving rhythm and impressive bass, I’m wondering what these guitars that sound like complexity or challenge are foreshadowing. Matter-of-fact lyrics detail a relationship ending and state how it ‘faded too fast’ but also ‘I don’t care’. Coming across as an apology of sorts, the track curiously seems as dismissive as it is reminiscing. Citizen influences feel strongly present specifically at the chorus with all-in and raw vocals. Seeming searching and defensive at the same time, “Reasons To Leave” could be seen as that ‘thank god’ fondness in no longer being with someone; bittersweet reminiscing.

Emotive and musically solid, Maybe I Was Wrong captures multiple angles of finding (or losing) yourself in response to connections with others. Raw, real, and rifftastic, the five tracks are an impressive take on alternative rock which is as anthemic as much as it is intimate; transporting us to specific real-world places and experiences, then also having us collectively belt out choruses at the top of our lungs. The tracks work well from the very first listen, while repeat listens would undoubtedly unfold more of the meaning and intricacy being expressed, and have them stick firmly in mind as they deserve. It’s a stellar debut! 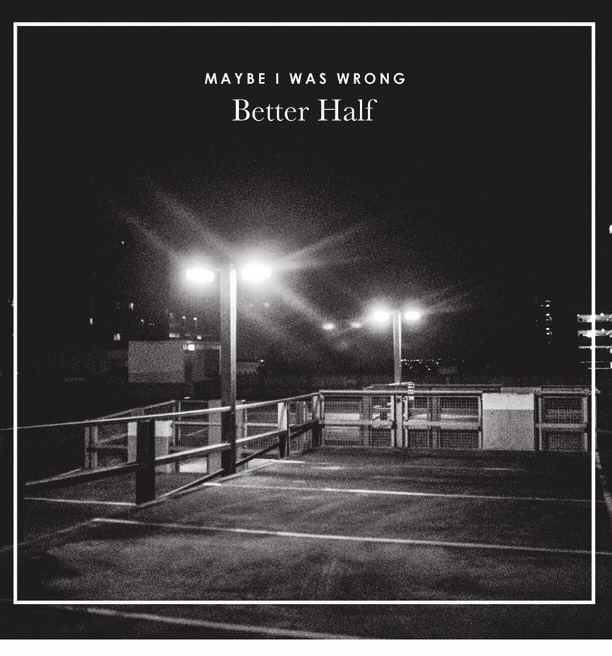 Better Half - Maybe I Was Wrong
The Good

Straight to the point lyricism, catchy riffs and impressively structured songs. I can already see the emotional relatability and connection these songs will offer in a live setting.

Repeat listens are likely needed to get familiar with the nuances of each track, to mentally recall them as separate from a steady alternative rock mass.