We’re huge fans of Greyscale Records due to their down-to-earth approach as well as the incredible bands on their roster. The growing label is expanding again today, announcing Antagonist AD as the latest band to be added to the Greyscale family. With Antagonist AD placed firmly on the heavy end, the Greyscale roster features a sonic spectrum from The Comfort’s alternative dreamscapes and Stuck Out’s pop punk grief, through Aburden’s intense melodic hardcore, Belle Haven and Deadlights’ post hardcore fire, to the heavy darkness of Alpha Wolf and Justice For The Damned.

The New Zealand based band might not be familiar to recent newcomers to the heavy music scene. The band formed in 2005 and then took a hiatus after their 2015 release Haunt Me as I Roam and touring in 2016. Even while away from the scene, the band never stopped writing, and are gearing up to reveal what’s been building behind the scenes during their absence.

With the Greyscale signing and their new song, Antagonist AD are raring to go, in particular craving the experience of their live shows. In their words: “We slept and now we are back. Our shows were always crazy and we missed that energy, that feeling, that release and that’s why we are back. The music is not just for us, it is for everyone. We feed each other; the feeling, being connected, the release and the empowerment. We have written our best stuff yet and as long as people are there to get down – we are gonna bring it.”

Antagonist AD’s fresh track “No Justice” brings a punishing and driving sound and a strong message of accountability. Vocalist Sam Crocker states that “No Justice” is about “coming to the reality that western society was built upon prejudice and injustice.” With the new track, Antagonist AD are pushing for change from the self outward; owning how you yourself are living, as well as the consequences of your choices, and seeing this accountability as the means through which you can make the biggest difference.

“No Justice” doesn’t just rattle at the cage of authority. It dismantles it; tearing the bars of the cage out one-by-one with measured strength while we watch. Accountability comes in shredding the rules, denying roles of control and authority. Without these confines and existing within remaining freedom, accountability turns the catchcry of “Where’s the justice?” over to each of us, with the clever lyrical wordplay of “It’s just us.” I see this intention as each of us doing what authority figures (church, government, societal rules) should have done but have failed to.

Insanely heavy music wrapped around empowering and important messages ticks our boxes and we’re keen to hear more from Antagonist AD when it’s ready. In the meantime Sydney and Melbourne fans can catch the band next month, along with impressive supports. The band expect chaos. Come warmed up and ready to let loose. Show details below.

Watch “No Justice” via music video here. You can also catch it on our Spotify playlist. 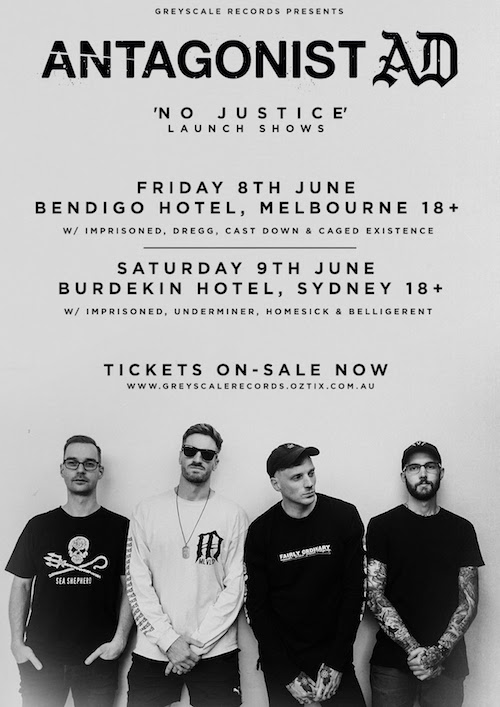 Better Half - Maybe I Was Wrong EP (Review)