We know Booka Nile for her current role on keys and vocals for Make Them Suffer. At the start of her journey was growing up in a music loving household, where music was constantly playing. This love of music flowed into her teens, where music helped her endure the challenges of high school: “My parents encouraged me to start learning piano using my great grandmother’s piano when I was 8 years old. When I turned 13 I was a bit of an outcast in high school and music was something I turned to in order to cope with that but it also helped me to forge meaningful connections with other people who lived and loved music.”

At the age of 16, Booka stopped piano lessons and embarked on writing her own music. It didn’t develop into anything more than a casual interest at that point, with Booka just playing in a few bands and jamming in lounge rooms or garages. It was her studies in psychology that sparked a more serious take on music. “I did a psychology degree years ago and my thesis topic was on how humans cognitively process music and melody. This was the first time I started exploring music in a really serious way.” Following her studies, Booka managed a small psychiatric hostel and decided to start a music therapy program for the residents, which has continued to run to this day, even though she’s no longer the manager there. This was the first time she started using music in her professional life. It was in 2016 that she first started having a conversation with Nick McClernon from Make Them Suffer about professionally pursuing music as a career, and in early 2017 she quit her job to join the band full time.

Even though Booka is no longer managing the psychiatric hostel, she is excited about a project she’s working on with some of her clients in mental health. “I have been working closely with a lot of the residents still and so far have recorded five of them doing songs of their choice and a few originals. Its deeply rewarding and I can’t wait till its completed so that them and their families can hear how awesome they sound!” 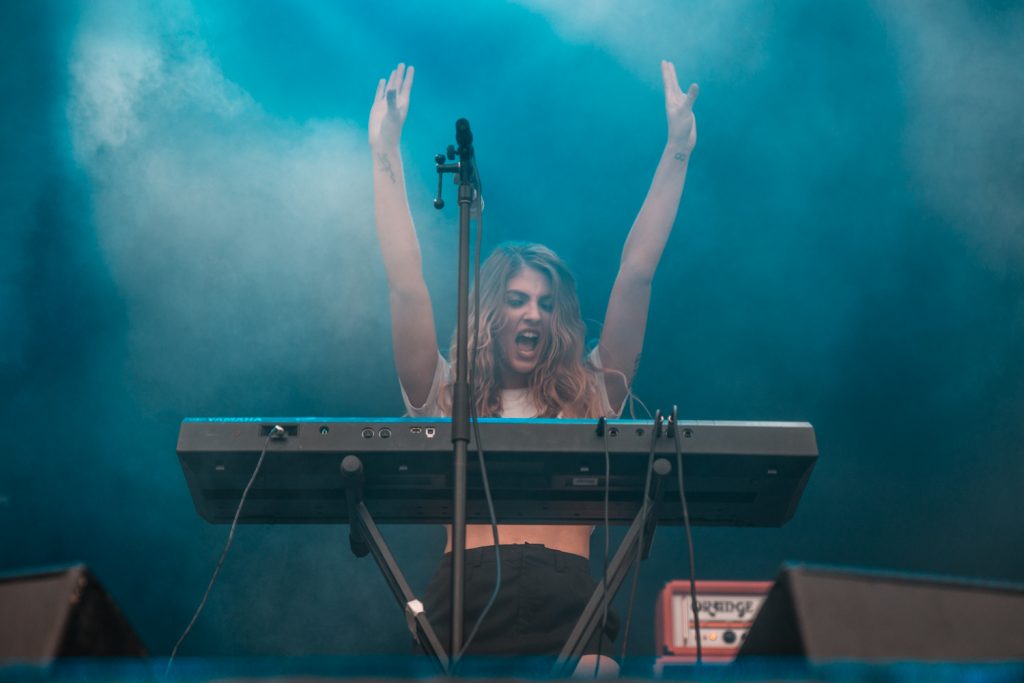 When it comes to encouragement on embarking on music professionally, Booka shares that she received ‘tons’. “Before I decided to do this and 100% commit myself to music, I had a very lengthy conversation with my dear friend Alex Paioff (owner and founder of Pilerats) about whether or not I should risk it all to join the music business. He was a huge factor in helping me build the courage to sacrifice everything to pursue music professionally. Him and the guys from Make Them Suffer who have supported and encouraged me throughout the whole time I have been in the band, along with the support of my family were really the ones who gave me the courage to take this leap.”

“Don’t think about it, just do it. There’s nothing better in this world.”

Booka adds that she also received (and continues to receive) great support from others in the music industry. “I remember the guys from Karnivool giving me some great support and advice. I’ll never forget talking to Ian Kenny about it and he just said ‘Don’t think about it, just do it. There’s nothing better in this world’. Steve Judd also gave me great advice on how to calm my nerves before shows and Jon Stockman ran through all the tour tips and tricks to help me along the way. In addition to this my girlfriends were hugely supportive in particular Shontay Snow from Saviour who is a huge source of inspiration and encouragement for me, especially in the past year.”

By way of gender inequality, Booka acknowledges the stark difference in her treatment compared to her male band members, sharing that she’s been spoken to differently, and often asked if she’s the ‘merch girl’ or asked which band member she’s dating. “When they discover I’m actually part of the band they typically become very apologetic and apologise for their assumption. It’s unfortunate that so many promoters arrive at the conclusion that I’m not part of any of the bands and that I must be there to sell the merch or that I’m a girlfriend of one of the members purely because I am a female.”

She shares a story of a particular negative experience on an occasion which should have been celebratory, yet ended in violence due to unacceptable behaviour. “There was this time where one night we were all out at a bar after one of our shows in Germany and I had a guy ask me whether I was a groupie. I pressed him on the issue and asked why he would jump to that conclusion. He said ‘Because you’re hot and because you’re an Australian’. The guys I was with backed me up and the guy apologised however, he then said ‘The way you’re sucking on that straw would suggest you are in fact a groupie.’ One of the guys in the tour party then punched him in the face. The guys I tour with have so far been very against that type of sexism and misogyny in the industry and I’m glad not everybody shares the attitudes of the jerks I’ve encountered.”

“I refuse to let people with such diminished brain capacity and closed minds get in the way of doing what I love.“

Booka also refers to social media comments that videos Make Them Suffer has attracted, saying things like “Someone tell the woman to shut up” or “This song was great until that woman’s vocals turned into this pussy bullshit”. Booka says “It’s frustrating to see that those types of idiots still exist but I refuse to let people with such diminished brain capacity and closed minds get in the way of doing what I love. If they can’t accept the input of a woman in a heavy band then they can continue to live in their archaic bubbles and go listen to some other music.”

When it comes to a sense of safety at gigs, Booka says she’s never felt unsafe, just angry. “I’ve had all parts of me groped at gigs whilst standing in the crowd. It doesn’t happen at every gig I go to but every now and then there’s a shit crowd with assholes in it.” There was one occasion where she had to leave a show because the groping kept happening to her by different people. “I would call out the person who did it each time and they would leave me alone after that (usually after calling me a bitch or rolling their eyes at me) but then someone else would come and do it. The anxiety I started to feel about being groped again got too much and so I just went home and missed the rest of the show. It was really uncool.”

When doubts or fears hit, Booka says that her love of music and the guys of Make Them Suffer inspire her to keep going. “I’ve never loved doing anything as much as I love playing and writing music and I won’t let anybody take that away from me. That and the women who contact me and come up to me after shows letting me know that what I’m doing has given them the confidence to go out and buy that instrument they always wanted to learn or that they’ve started a band because seeing me do it has shown them that they can do it too.”

As for role models or mentors in the music industry, Booka says she has many, but specifically shares her appreciation for Lynn Gunn (of PVRIS) and singer-songwriter George Maple. “Lynn Gunn has got this incredible presence about her and just owns the stage when she’s up there. She’s an a huge advocate for equal rights and equality for the LGBTQ community and we need strong figures like her in the musical community. George Maple is in a completely different musical genre to the one I’m in but her attitude and fierceness is inspiring to me. Her music and her ethos is all about freedom of expression and sexuality. She writes and produces all of her own music and she’s an amazing person in real life too. When I’ve hung out with her in Perth she has made it very clear that she is all about supporting the sisterhood and other women in the music industry. She’s just awesome and she’s given me some great advice on music production and navigating myself as a musician who’s fairly new to the industry.”

When it comes to the future for the music industry and a balance of gender in it, Booka hopes that herself and other women in the industry never get made to feel like they are not valued or that they don’t have a place in the industry. “I hope that we will all be able to go out to shows and not have to worry about being groped or called bitches should we tell someone off for doing it, and I hope that all women will feel confident enough to start playing gigs without worrying about gender based criticism and discrimination.”  Booka also hopes that all the males of the music scene adopt the attitudes that she sees in her Make Them Suffer bandmates: “Fully accept and appreciate diversity and input from all people regardless of their gender, ethnicity, sexuality etc. The change is already happening and the vast majority of guys that I encounter in the industry are awesome. I look forward to the ones who are lagging behind and stuck in the 18th century hurrying up to join the rest of them!”

“Be strong, be fierce, work your ass off and learn your craft to a tee.”

Booka’s advice for women wanting to get into the world of music is to just get out there and do it! “If it’s your dream, make it your reality. Don’t ever be disheartened by sexism because anyone who gives you flack for being a woman playing music clearly has some deep seeded issues. Don’t even dignify those people by arguing with them because a) your words wont get through to someone with such diminished cognitive capacity and b) you’re better off just getting awesome at what you do so that they have to eat their words. Be strong, be fierce, work your ass off and learn your craft to a tee.”

You can support Booka and Make Them Suffer by catching them on tour with Silent Planet, Oceans Ate Alaska, and Thornhill. More details on that are here.

Trophy Eyes - You Can Count On Me (New Music)