Like a long-awaited present that got lost in the dusty backroom storage of Australia Post offices, it’s incredibly exciting to have not only a fresh single from Deadlights, but the news of a new album on the way. The Uncanny Valley releases on 21st May via Greyscale Records, and “Born Of A Lie” is our first taste.

A beloved favourite band of this writer (since Ambleside tweeted about them in 2017), it’s a little surreal that there’ll actually, FINALLY be a follow up to Mesma. Breathtaking singles “Bathed in Venom” and “Sugarcoated Psychosis” have been satisfying treats in the meantime, but it seems they’ve just been stepping stones toward the new story that The Uncanny Valley will be delivering. If you’ve been around Depth for awhile, you already know that I already have a million questions about what the album will share, with both the album title and the first single hinting at ideas about being human but not quite human. What’s it all about…… !

Looking at the “Born Of A Lie” single in isolation though, the most obvious thing is the presence of church and religion, as well as a looming digital presence, literally. The Deadlights guys constructed a 6 foot tall robot for the music video “out of a TV, 200m of cable and scraps found around the place, then mounted a 3D printed head on it.” Intended to be menacing and reflect the hold that the digital world has over us, it’s certainly effective in the darkened cathedral setting.

Sonically pummeling and driven, calling for “an end to all of this”, Deadlights swiftly rip the listener into unease with them in “Born Of A Lie”, with sharpened guitar blades striking into weakened points. With humans taking sentience and turning it into an “infested shit storm”, the track highlights the worst of humanity, and our subsequent loss of opportunity. Combining the gritty vocals of Dylan Davidson and impossible singing pipes of Tynan Reibelt brilliantly paints both frustration and that missed potential.

“Nobody’s ever listening to me when I pray”

Hitting a ‘What the fuck are we doing?!’ incredulity at the soaringly beautiful chorus, “Born Of A Lie” smacks of a decision to give up on God or any other deity being the solution to one’s woes. Doubling down on this, the dense second verse punches home religious distaste with two-steppable fire. Roaring that “we don’t need faith or healing”, it’s fascinating to hear Dylan lean into more of a ‘singing’ style than before, with the (temporary) surrender to a heavenly digital landscape.

Sounding and feeling tumultuous and bombarding, the grip of control under the digital lordship unfortunately turns just as bad as religious obedience. All that’s left is a decision to “burn it all”; to destroy the clutches of these entities that weaponise us. In Dylan’s words, “The song stabs at organised religion and its hold over me in the past and then discusses how the need for constant validation from tech has merely replaced the need to feel like we are doing right by our god. Our new god fits in the palm of our hands and has been perfectly weaponised to control what we do and why we do it.”

It’s yet another impeccable piece of music from the Brisbane collective. With no idea how I’ll be able to wait until I can stride boldly into The Uncanny Valley, let’s just spin “Born of a Lie” on repeat, hey? Watch the Third Eye Visuals music video below or stream now.

The Uncanny Valley artwork and tracklisting: 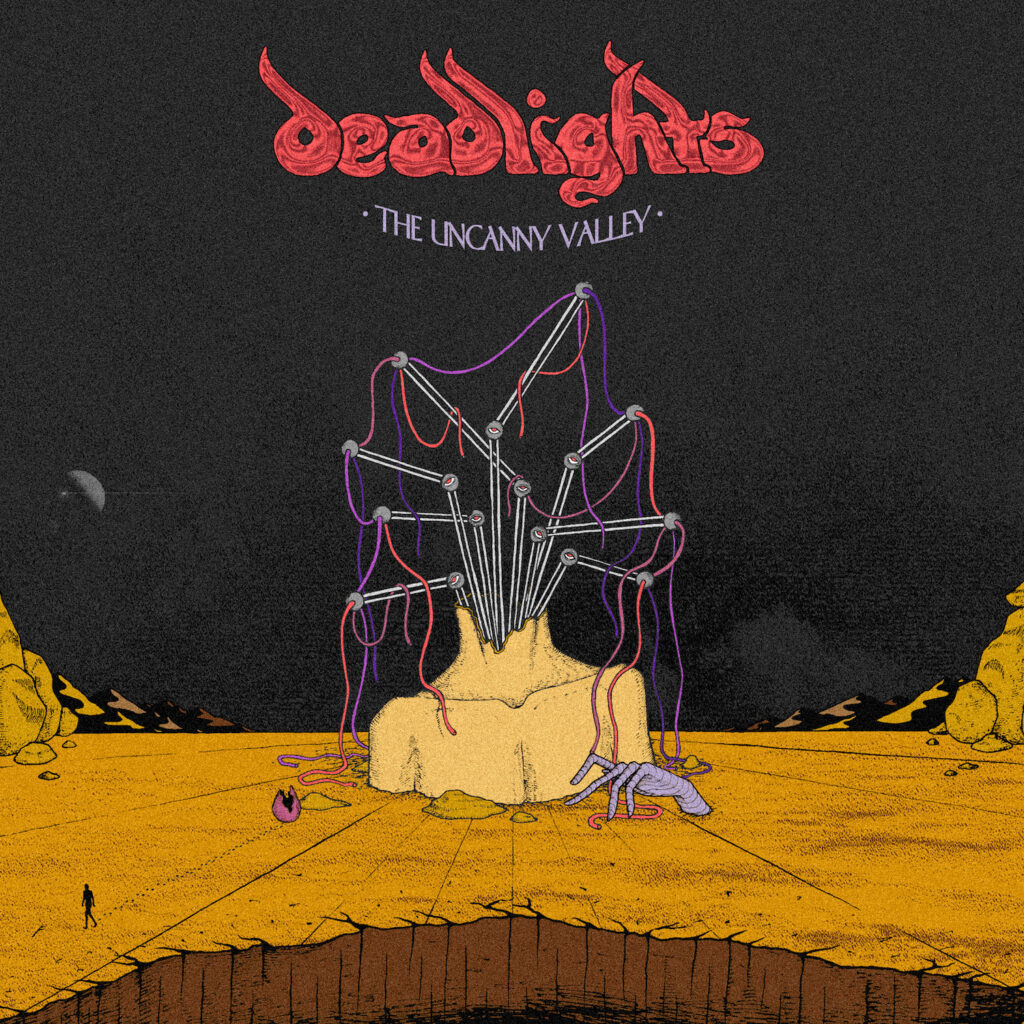