There’s a lot to be said about the brilliance of Butterfly (it won our EP of the Year 2018!). The EP seemed to reinforce what the band had previously created together and swiftly put Thornhill on the map. So how on earth does one follow up on something so well loved?!

For Thornhill’s vocalist Jacob Charlton, the “how” was made clear with a big-picture perspective and having their eyes toward the future. In his words: “We wanted the album to be the perfect follow up to Butterfly, and yet the perfect way to lead us into our next album in the future. We wanted it to have enough difference that people would be surprised, but that it would also allow us to keep branching out down the track.”  Refusing to limit the band and their music to any specific genre, Charlton stated it clearly:

Talking about The Dark Pool specifically, Charlton indicates that the title refers to a metaphorical dark pool where we can all see a reflection of ourselves in; what builds us, what makes us. Wanting to go beyond his own catharsis on the album though, Charlton hopes the songs will be relatable with their broader meanings outside of his own personal ones. For example, previously released single “Coven” ties into anxiety, and new song “Nurture” relates to one-sided adoration…

And unrequited love never sounded so good. Barely 30 seconds in, “Nurture” is already huge and firing on all cylinders courtesy of thunderous beats and relentless riffs. Coming across as threatening and pressuresome at first, there’s a momentary reprieve in a more serene moment before amping up again. A declaration of affection toward another is practically buried amidst floaty layers of sound. It’s an initial seed planted that seems to soon turn sour. Adoration evolves into “giving your life to an idol” and the ache of self-hate seems only curable with attention from a certain other.  (I’m suddenly reminded of rabid band fanbases that I’ve stumbled across on twitter.)

With greater and greater desperation, this void of love is toxic and damaging and Thornhill have captured the beating to one’s self-respect and heart with a blistering and erratic force. For probably the last minute and a half of “Nurture”, I’m too busy taking in this stunner of a song with a smile on my face to go into any kind of analysis or written interpretation.

I’m in wholehearted agreement that with “Nurture” (at least) Thornhill have created something that’s very ‘them’ but also different enough to be intriguing and stand alone. I feel like this combination of pummeling instrumental precision and eerie atmospheric pockets serves Thornhill exceptionally well. I loved it in “Limbo”, on Butterfly, and in “Coven” too, and it works for them here too.

“Nurture” comes coupled with a music video produced by Kieran Ellis-Jones and directed by Ed Reiss. It features some familiar faces too. The unrequited adoration theme and its increasing damage upon a person has shifted slightly in this visual representation; with the video’s main character striving so hard to become a superhero that he becomes a criminal himself. It’s a clear demonstrations of the best intentions coming undone, and how relentless failure to leads to the gradual ruin of a person.

And just when we think the good news is done, there’s just a bit more: A release show! Hitting Melbourne’s Stay Gold on 15th November, the line-up is completed by Deadlights, Mirrors, and Tapestry, making for an absolutely stacked night of music! Tickets here: https://thornhillatstaygold.eventbrite.com.au/ 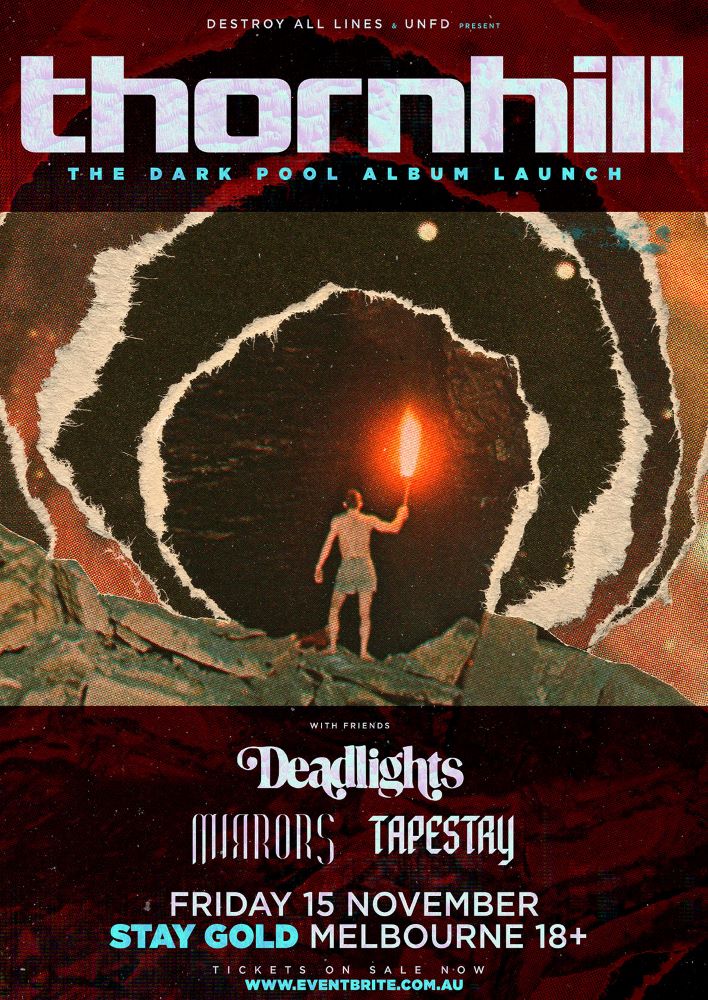 Lastly, take in The Dark Pool‘s artwork and tracklisting, and get HYPED for more to come.

The Contortionist - Our Bones (Review)