Any news from the Slowly Slowly camp is the best news! Today the Melbourne four piece of Ben Stewart, Alex Quayle, Patrick Murphy, and Albert Doan are sharing a music video and the very welcome news of another tour. Seeing Slowly Slowly live on stage at Corner Hotel was one of the greatest live experiences of this gig reviewer’s year so far. In short? You need to experience this!

Ninth on the St Leonards album, “Smile Lines” is a song that easily showcases the band’s capacity to express themselves emotionally with gentle conversational sound through to explosive wildness. It’s a treat to follow the thread of the song as it continues to build. With its new and very curious music video, “Smile Lines” gains an added dimension, further exploring the idea of two sides of a person.

The writing itself of “Smile Lines” had a ‘Jekyll and Hyde’ theme also, with Ben sharing that the heavier sections were written as a band and that they “had a lot of fun jumping around injecting it with energy”, and he then “sat with the quiet elements at home, trying to impart a conflicted narrative, which I felt would be an important backdrop to the more aggressive moments we had in the rehearsal room.”

The two sides of loud and light, clear and distorted, were brought to life visually by Michael Roberts (who is also responsible for the videos for “Alchemy” and “Ten Leaf Clover”). We watch “Garrod” in his shiny, badge-wearing, presentation-proud, smiley supermarket life come home to something more left of centre, while also fascinating to watch.

In Ben’s words “The juxtaposition felt right and that’s where Michael Roberts and I dreamed up the character of Garrod, the Jekyll and Hyde supermarket employee, harshly torn between his watered-down self and a complex rawness only present behind closed doors. Take what you want from the storyline, but for me the song centres around becoming entangled in your own web – the more you thrash around the worse it gets. Thomas Watson (Garrod) was incredible to work with and took us back and forth from stunned silence to roaring laughter over and over again in a very cold house one night in Brunswick.”

Be sure to watch the last moments of the video when Garrod comes face to face with his heroes as they try to buy some coffee. We’ve all been there, Garrod.

You too might have your own stunned and speechless moment meeting one of your heroes at the merch table. Set your alarms for 9am Thursday and get in quick to reserve your spot in the crowd to watch “Smile Lines” and your other favourite Slowly Slowly songs being shared in their full expressive and explosive glory. Dates and venue details are below. In the meantime, enjoy “Smile Lines”: 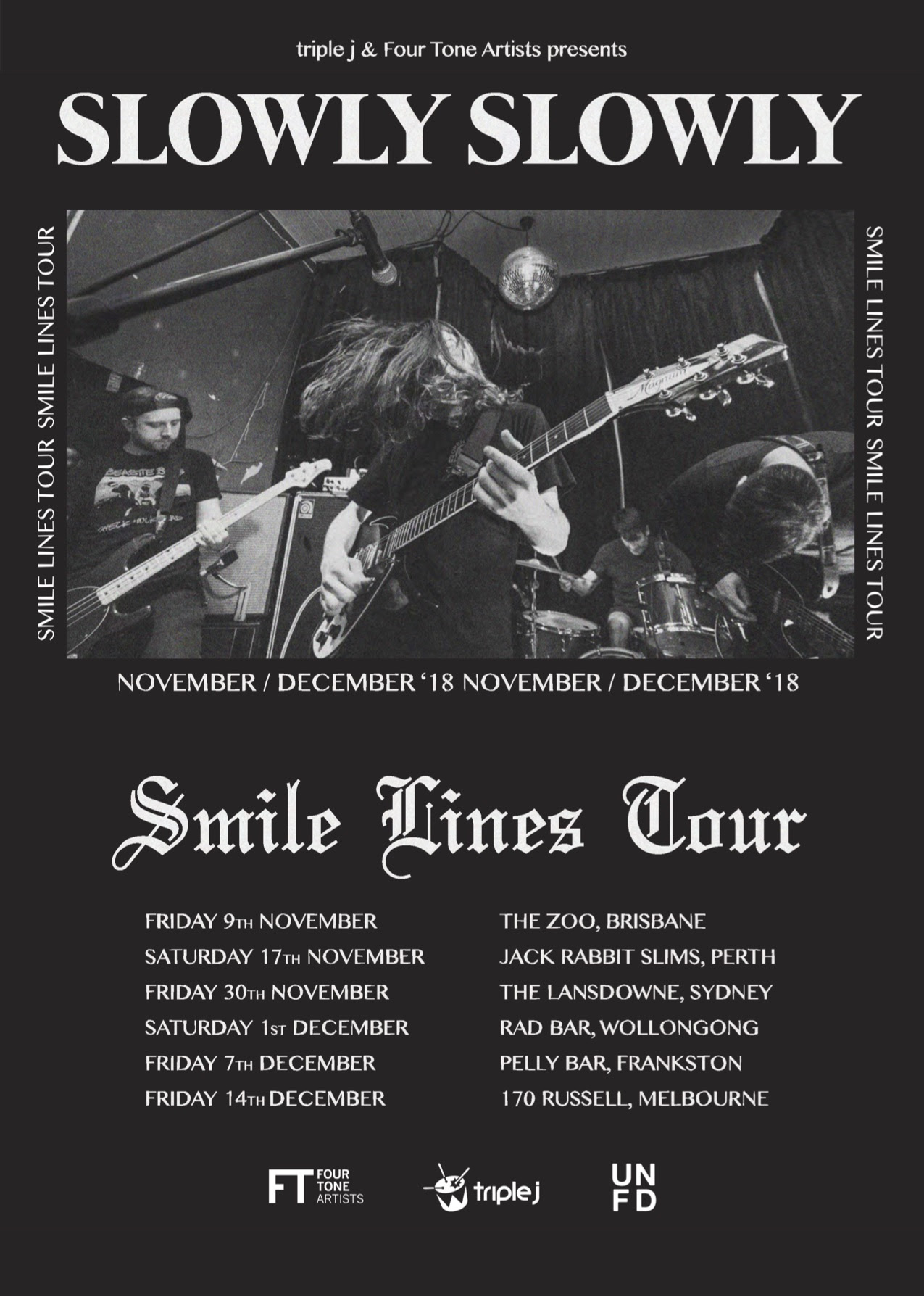 As It Is: Interview With Patty Walters

Belle Haven: 'You, Me and Everything In Between' Tour @ The Evelyn Hotel