Walking into The Evelyn Hotel, I was faced with a smiley David De La Hoz, and also a zombified Tom Weaver at the merch table. It was great to see familiar faces, as well as introduce myself to Tom after our lengthy conversation a couple weeks beforehand. I let the guy be to do his merch thing, given that jetlag was probably hitting in full force, mixed in with an overnight trip from Adelaide.

I’d love The Evelyn’s exposed brick self even more if the bar in the band room had EFTPOS. This cashless show-goer made do with water, and found a prime position for show openers Reside.

The five piece hit hard from the beginning, barrelling the first two tracks out at us one right after the other, easily grabbing attention, despite some technical issues. Dual vocals work so great for this passionate band, and after a hard-hitting introduction they flowed into an easier and free-er mode, with some relaxed dancing on show from frontman Liam Guinane.

Reside’s stage presence was an enjoyable mix of floppy ease and hardcore punchiness, as a collective of die-hard fans joined in with the band the whole way through. Though Liam later said to me “our show at Cherry Bar was better, yeah?”, it was still a good time watching them in action, with stand-out moments being the cover of Movements‘ “Kept”, collectively singing the chorus of “Give up, life moves on”, and having “We’re Not Monsters (Yet)” to close the set.

I always think “Man, I should listen to this band more often” when I see Fever Speak. Second on stage, they had less of the ease and fun of Reside, but brought captivation via the storytelling vibe of their songs, and an impressively solid stage presence. More artful than entertainment, the Fever Speak set was a study in dynamics, where subtleties existed along with screams, and the crowd were taken along with the shifts, bolstered by fantastic harmonies and immersive instrumental explorations.

My attention was evenly shared across the stage, watching the members of Fever Speak fully into their individual craft, together. I was a huge fan of the loudness of the bass, and the masses of emotion thrown into the end of their set. The microphone slipped down but vocalist Brent didn’t give a fuck, to put it bluntly. The guy just kept screaming, raw heart and passion. It was all very rock and roll, while never seeming to be trying too hard to make it so. This very real band are a pleasure to watch.

I’d never seen Stateside before, and wasn’t sure what to expect at all, but the Brisbane band’s set was far more upbeat and pop than I expected to see on a night’s line-up that potentially included songs like Casey’s “Bruise” and Belle Haven’s “By Hook Or By Crook”. I didn’t expect a Katy Perry cover to show up in amongst this.

Though the band seemed well-connected, exchanging looks and grins with each other throughout the set, and clearly having a lot of fun, I just wasn’t sure how to take the constantly smiling stage presence. It wasn’t something I’d seen in this scene before at all, and I probably spent a lot of time in my head trying to make sense of how Stateside fit in this otherwise predominantly emotionally raw (read: existentially confused) line-up.

Stateside opened with “Neon”. While lyrically vulnerable and troubled (“I’m lost without a way to find you”), the song was presented with beaming smiles, as were songs like “Livingstone Road” (“You can’t drown me”) and “This Is War” (“Stand down, cease fire”). While the band were consistently generously offering up themselves to the crowd (especially given that aforementioned grueling overnight Adelaide-Melbourne drive), the incongruence between the content of the music and the high energy and sparkling stage presentation made it tough for me personally to get into.

A stand-out point of the Stateside set was their openness about mental health, with frontwoman Erin Reus importantly sharing a desire for people to feel heard and and never alone in their struggle. I’d love to see a live version of Stateside that has the band members go emotionally and vulnerably deep into what they’re sharing, carrying the same messages of connection and solidarity with mental health struggles, and lose some of the (unnecessary) gloss.

I got the emotional congruence that I was craving with Casey‘s set. Frontman Tom Weaver spent most of his time on stage at the microphone with his eyes closed, losing himself in the music and his words. It was easy to go there along with him, making for an amazing experience of breathtaking stillness, or explosive emotion when Tom would punch out and thrash his limbs along with soaring instrumentals or hard drum hits.

There was a lot of love in the room for the band, and it was easily moving with genuine emotion flooding the space. Songs from Where I Go When I Am Sleeping and Love Is Not Enough were met with quietly focused attention, impassioned singalongs, or wild moshing. And the same crowd that was brutally crashing into each other, stage diving, or crowd surfing, were just as at home in this set – swaying along to sweeter moments. We were all along for the multi-faceted ride in this Casey experience, with many waiting years for this moment in time.

Based on Tom’s reactions throughout the set when we were belting out songs along with him, it was a surreal experience for Casey having us all ‘giving a fuck about their band’ on the other side of the world. Haunting at times, the beautiful soundscapes filled the room and it was a pleasure to be part of something that gave space for quiet sharing in vulnerability or letting loose, for us in the crowd just as much as the band. Despite the band’s exhaustion, it was a powerful set, accented by genuine banter and presence, and weak requests to ‘do a shoey’ were thankfully ignored.

With fists in the air, Belle Haven brought an almost intimidating presence to the stage. I only say ‘almost’, because everyone that knows this band knows they are the nicest and not at all scary. This knowledge aside, their stage presence was consistently STRONG. Soon after their arrival to the stage, Belle Haven ripped into album opener “You.” with high energy, inspiring an instant mosh.

There were technical issues unfortunately, but they were handled professionally by the band, with frontman David De La Hoz moving himself to Tom Mitchell’s microphone when his went momentarily out of action. The very loud crowd also availed ourselves to step in to assist on vocals, as favourite songs of You, Me And Everything In Between were coming at us, and being sung with abandon.

With the album turning one last month (Happy birthday, YMEB!), fans of the band know these songs by heart, so the little touches of difference that Belle Haven brought to the show were pleasant surprises. It was great to see each member of the band have a ‘turn’ of featuring in musical interludes, such as a drum and bass party in the midst of “Little Polaroid Boy”, and Daniel ‘Mara’ Marinakis letting off steam with guitar wildness in “HighfLIAR”. The adding of metaphorical cherries on top of already great songs really highlighted the celebration factor that the tour was intended for.

The five piece went hard at it, and it was just as wild on stage as it was in the mosh when “Egophobia” kicked in. A very satisfying flow right into “Selfmade” kept the energy high and was yet another cool variation on this well-loved album. Though I couldn’t see what was happening due to the thickness of the crowd, “Hollywood” was true to life in featuring two drum kits, and I’m going to hazard a guess that it was the band’s former drummer James who was having a drum-off with Jake Zammit. The track’s raunchy grit and chaotic nature was amplified by on stage mayhem, featuring Mara menacingly waving a fluorescent tube at us, and Christopher and David screaming “Let’s. Hope. Hollywood. Cares.” Brilliant.

It was around “Burn The Witch” and its stave-diving rowdiness where my attention was drawn to Jake going hard at it on drums and knowing that it would be the last time I’d see him with Belle Haven. The guy is a great asset for the band and it will be sad to see him go. Watching the constant outpouring of energy of everyone on stage, and knowing from my chat with David that the band are gearing up for a good break, I felt like this tour was creating an impressive high note from which to take a pause on.

“By Hook Or By Crook” live was as emotionally rough as it seemed like it would be. How could anyone not be moved with this vulnerably honest expression of David’s experience of watching his grandfather’s battle with cancer? I felt for David having to go into this, night after night, and he was visibly affected for some time afterward. He openly spoke then, relevantly sharing his perspective of suffering as part of the experience of life and also growth, saying “If you don’t trip, you’ll never learn to run”.

The night continued, featuring a hectic, messy, and great rendition of “Me.”, and several other cool things that I don’t want to spoil by going into detail about them. I’ll close with saying that it was a pleasure seeing Belle Haven in full flight and shining brightly at The Evelyn, leaving us all feeling better for the experience!

Catch the tour while you still can, as it continues in Wollongong, Brisbane, Newcastle, and Sydney: 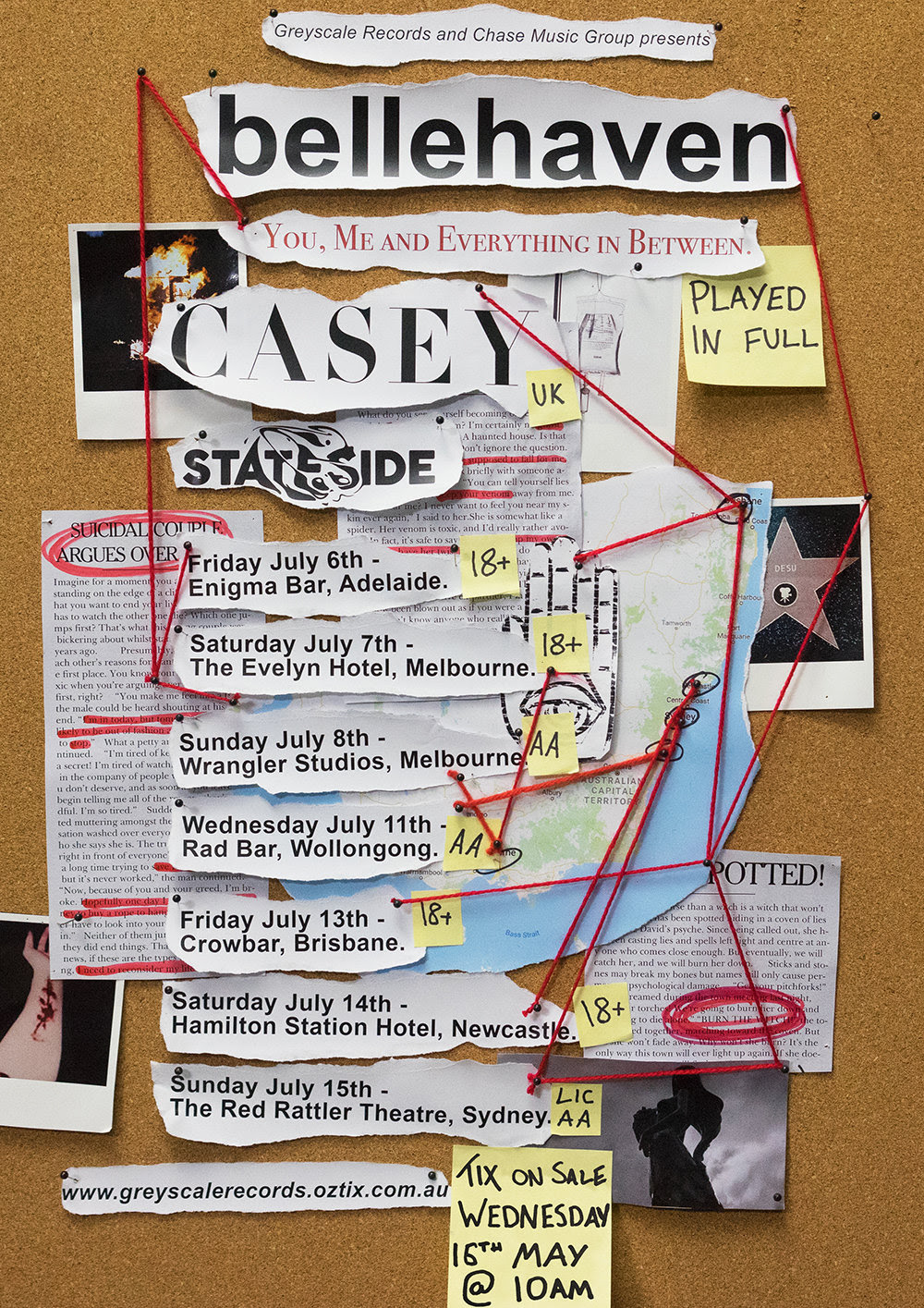