Slow Talk have a truly unique sound for sure, as the Melbourne duo demonstrate their musical talent in their debut EP, New Vernacular. To place a genre on these guys in simply impossible, as the crisp melodical vocals combine with the mesmerising guitars to create a sound like something I’ve never heard before. Slow Talk are made up of James Butler on vocals, and Ash Fuller on guitar.

When attempting to describe the writing process for New Vernacular, vocalist James Butler says “New Vernacular forms a coming of age journal, capturing the dire and challenging internal dialogue experienced throughout periods of grief and transformation. The song writing process was a relentless and cathartic necessity for us, something that is reiterated in the records pervading sense of honesty and release.” With this we decided to dive right in and give it a listen.

New Vernacular kicks off with “Disclaimer”, which is about how things can mean different things to different people, and the acceptance of this. It speaks of a singular moment where it appears that everything is going to go well with someone, as if a romantic relationship might bloom, but then the realisation hits that this encounter may not mean as much as it does to the other person as much as it does to the speaker. It is about not being able to enjoy the moment you’re currently in because you know it isn’t going to end up how you want it.

As well as the clean melodic vocals, the synth backing keeps a sense of flow and holds all of the elements of the track together. Even with fast paced riffs and the drums kicking right in, it still has an overwhelming sense of peace to it, if that makes sense. A very enjoyable track that tells the story of a potential romance that fails.

Next up is lead single off the EP, “Golden”. According to guitarist Ash Fuller, the track “is an exploration of our desire for people that physically fit the ideals we look for in a partner, whether they be people we briefly encounter in our daily lives, models we see on instagram, or celebrities. it discusses our ability to extrapolate the little we know of these people and develop high opinions of them.”

This is obviously evident in the lyrics, as the song appears to begin with speaking about the possible perfect person that we wish to find. How they appear to be visible just beyond the horizon, just out of our lens of sight, and how we have no idea what form they could actually take. “Golden” is about waiting for that person to show themselves, and the journey that takes place up until then. Even this idea of a person can keep you going, even though there is no proof that they even exist and they may just be a myth. This person is described as a “false idol” as they are so idealistically perfect that it is as if they are a God. The song reflects the knowledge of the far-fetchedness of all this but still has a great sense of longing to it, as the story is optimistic and hopeful, and reflects this through the instrumentals and the tone of the vocals.

Track three is “For What Its Worth.” This song is about denial, and not accepting that you have made a mistake. It speaks of someone who has been unfaithful in a relationship, and is attempting to avoid any guilt by blaming it on everyone and everything but themselves. This is only the start of the song however, as the song progresses and the speaker appears to accept what they’ve done and feel remorse. This is a great instance of songwriting, as it perfectly shows the progression and journey that this person goes through after they make this mistake. They realise they have made a horrible mistake and accept that they can’t fix it so they begin to attempt to move on.

“The good days are just the old days now, emancipated youth at the lost and found, I pushed it too far, now I’m breaking down.”

This song is about making mistakes and building from them, and is a beautiful case of story telling through lyrics, which are complimented perfectly by the guitar, as it matches the mood of regret and matches the tone of the story perfectly.

The fourth track is “New Vernacular”, which speaks of having a new lease on life after getting out of the grind of the basic everyday life. The speaker has escaped from the norms of what is expected of them and are flourishing under this new attitude and the freedom that they feel. They suddenly want to see the world, and experience everything they possibly can.

“I want to know what amazing means,
bring me back to life again, make it breathtaking.”

“New Vernacular” is about getting that second wind of inspiration to live life, and how something simple like writing music can be a perfect way to express yourself as it is almost like a second language: “Maybe this new language will help me find my way.”

The final and closing track off New Vernacular is called “Late Bloomer”, and it is about the suffering one can go through when experiencing mental illness and isolation. It talks about asking for help and not receiving it, whilst experiencing a raging battle of emotions and dark thoughts inside your mind.

“Its all going on in my mind,
the silence so profound,
I’m drowning in the lack of sound.”

This song is written perfectly and honestly, as it describes every thought that goes through ones head when they’re alone and having a rough time. It is a somewhat solemn ending to this fine EP, as it ends on a rather sad note having ended with a story of a person trapped in their own personal hell. The instrumentals are fantastic in this track also, as the vocals grow harsher and more intense to perfectly match the subject matter. It is almost as if the vocals grow louder as if they are trying to block out the non-relenting voices in their head. And with this the guitar gets deeper, faster, and heavier as it is as if the whole song is getting more desperate. The desperation feeling is overarching, as the vocals are begging for help and relief as they feel they won’t make it by themselves.

With this, New Vernacular is a honest and heartfelt EP, as it takes the listener on a journey through a range of different emotions. It delves deeply into the lives of both band members, and mixes the lyrical content perfectly with the instrumentals. There is not a single song where the instrumentals and the tone of the vocals do not perfectly match the meaning and emotion that is being displayed through the lyrics. Slow Talk have released something great here, and with highlight tracks like “Late Bloomer” and “For What Its Worth,” New Vernacular is a fantastically unique piece of music that will be enjoyed immensely by any alternative music fans. 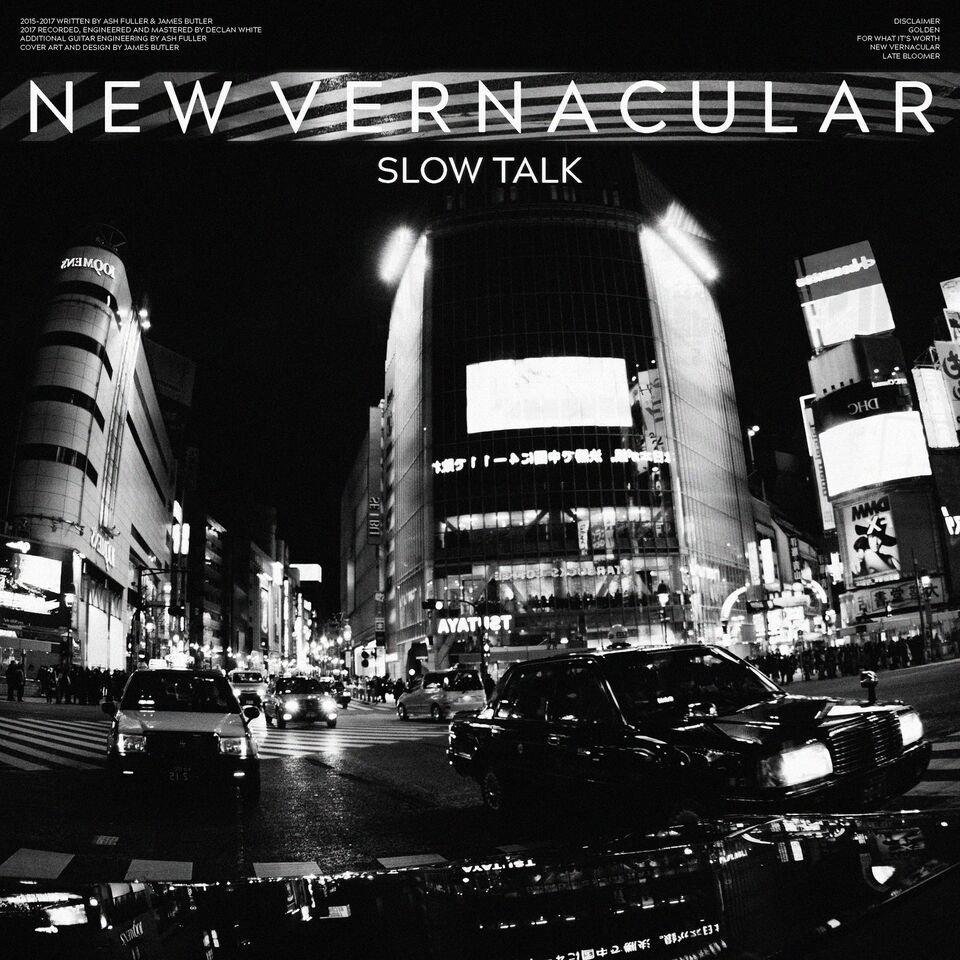