Legendary nu metal band Korn have shared the news that album number thirteen, The Nothing, is on the way. The number thirteen is clearly a key element of the release, which contains thirteen tracks and also releases on 13th September, via Roadrunner Records/Elektra Records. Korn is vocalist Jonathan Davis, guitarists James “Munky” Shaffer and Brian “Head” Welch, bassist Reginald “Fieldy” Arvizu, and drummer Ray Luzier.

The new release follows on from 2016 album The Serenity of Suffering and has Nick Raskulinecz as producer. In an interview with Revolver, Head shared that John Feldmann assisted with co-writing some of The Nothing‘s tracks, and Travis Barker also assisted with tracking drums in the early stages. In the same interview, Head indicated that The Nothing would be directly impacted by the difficult times that the Korn ‘family’ has been through on a personal level recently. In his words: “We’ve been through a lot. Now it’s time to get all those emotions and turn them into a positive with music. Jonathan is really good at that.”

As a concept/idea behind the album, The Nothing seems to be far more than the words themselves typically mean. Instead of an impactless void, to Jonathan, The Nothing is a place of balance of coercive forces of emotion and outlook. He explains: “Deep, within our Earth lives an extraordinary force. Very few are aware of the magnitude and significance of this place where good/evil, dark/light, bliss/torment, loss/gain and hope/despair all exist as one – pulling at us every moment of our lives. It’s not something we can choose to navigate, but rather an awareness of this ‘presence’ that surrounds us with every breath, as if we are being watched at every moment.  It’s the place where black and white energies attach themselves to our souls, and shape our emotion, choices, perspective and ultimately our very existence.  There is a miraculous and small realm within this vortex and it’s the only place where balance between these dynamic and polarizing forces exists -where the soul finds its refuge. Welcome to…..THE NOTHING.”

“It feeds on the doubt in my heart”

As first sonic taste of The Nothing, “You’ll Never Find Me” sets expectations high. Sharpened guitar and thunderous beats marry up with electro samples, laying out a scene of something dark and eerie. Feeling manipulated and drawn downward by the darkness of life, the protagonist/Jonathan hits a breaking point of wanting answers from this powerful presence. It’s at the chorus where he seems to take a stand in strength and openness, the anthemic sound of the song reflecting this.

A struggle is palpable at the bridge, where tangled up in sound and layers, he’s lost but hidden at the same time. It’s also interesting to see the album artwork of black cord that forms a human shape while also holding them stuck. The video also reflects the black and white presentations of the same thing. Does this all into the idea of The Nothing and its force? I can only speculate on that, but the progressive emotional ruining and the fruitless struggle (reflected in red in the video) in the track is made abundantly clear.

The Nothing album artwork: 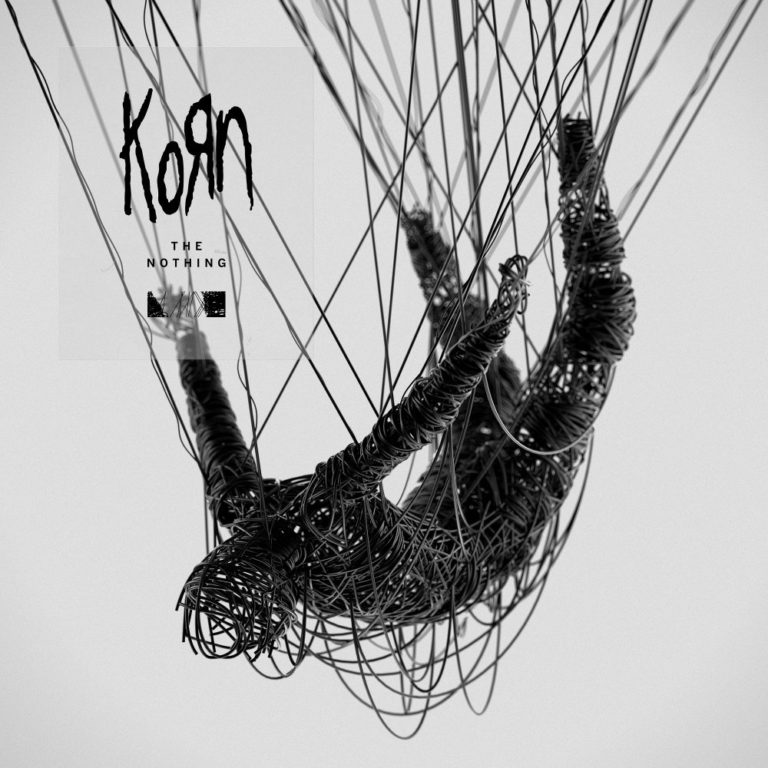