With hearing their instantly impressive take on melodic hardcore, I was keen to get to know Idle Eyes a little better. The Perth band consisting of Shahil (vocals), James (guitar), Alex K (guitar), Alex B (bass), and Max (drums), have just recently released their debut album Bitter Work. The product is eleven searing and anguish-laden tracks, which we explored track-by-track with the help of Idle Eyes’ vocalist Shahil.

The five friends of Idle Eyes met in different ways, such as school or TAFE, but collectively united over a love and passion for hardcore. The Perth hardcore scene was a home for them as well as influencing them as musicians. The ‘Idle Guys’ grew up wanting to be in bands like Miles Away and Break Even, as well as being in awe of American melodic hardcore bands like Have Heart, Defeater, and Ruiner.

Shahil refers to the songwriting process for the band as “a bit of a here and there approach”. He elaborates by saying “Sometimes James will just hermit himself behind a computer and come to us with a song that we then take and collectively add to like “Cavity”. Sometimes we like to riff it out in a jam room together and see what flows, which is how “Worry You” came about. I generally write all the lyrics and they’re generally a product of how I’m feeling or what I’m going through in different stages of my life. I’ve always struggled with dealing with my emotions and I’m very lucky that I have this band and my friends to help me get things out of my system to help me feel at peace with myself.”

Bitter Work‘s first powerful track “Gravedancer” is expressed with a push back (ie. “fuck you”) vibe; of having to fight to take your own life back. Shahil reveals that this sense of fighting back is how he uses Idle Eyes and the music they make. He says “I’ve always used this band as my way of fighting back at thoughts and feelings that bring me down, and I try to push self love and acceptance to anyone who goes through things similar to me. I often hear “it’s easier said than done” which is true, but I’ve fought and tried really hard to get to the place I am today, I know it’s not easy but nothing worth doing ever is.” Is the fighting back therefore the ‘bitter work’ that the album title speaks of? Originally thought of by Alex B, Shahil agreed that the phrase perfectly captured how he felt writing the album.

Album opener “Gravedancer” was written for a very dear friend of the band. Shahil shares that he “showed me true strength through his own struggles, and made me put my own into perspective. It has a very close meaning to us as a band.”

The poetically vibing lyricism of “Hollow Shell” was actually originally a ‘diss-track’ according to the band, but it matured over time along with them. Shahil says “the more time that passed the more I realised that I was seeing myself in that light at the time and a lot of my annoyances were toward myself, that’s why I changed the lyrics from “I watched from the outside” to “from the inside”.”

This thoughtfulness by way of words goes beyond lyricism; where “Blood Thins” is inspired by distaste at overheard metaphors, and carries a self-berating vibe. Shahil shares that the track was written during the experience of watching his family fall apart. “It was really hard for me at the time to think about anything else, so naturally I wrote about it. I was hearing a lot of the term “blood is thicker than water” being thrown around, which I thought was absolute bullshit – the way I saw it was that if that were the case blood can be thinned out by choice, whether it’s the person affected by the actions or the ones committing them. Getting this out really helped me become level headed about the situation, strengthen the bonds that mean the world to me and severing the ones that were toxic.”

The darkly raw “Emptier Than Hate” is beautiful and honest. It’s understandably a favourite of many. Shahil shares that it’s important to him that his lyrics are personal, and he feels honoured when others share that they can relate. “Even though they’re generally on the negative perspective of things, it’s good to know that others feel the way we do. It makes you feel less alone and more open to reaching out to others without the fear that they won’t understand. If I can write lyrics that help others feel that way, or any way that connect with them, then I’m doing what I’ve always wanted to do.”

By way of sound, Idle Eyes’ band members have their own preferred styles, which is why the album carries a breadth of sound. Idle Eyes don’t like the idea of being ‘boxed in’ to a particular sound. Their perspective is “We’ve got heavy songs for when we feel like playing heavy and lighter songs for when we want the singalongs. I think it leaves us open so that if one day we want to write an album of breakdowns we can, but if we want to write some bangers no-one’s going to say no.”

A similar sense of emptiness carries forward from “Emptier Than Hate” into “Cavity”, and includes a vocal feature by one of Idle Eyes’ ‘best friend in the world’, Brandon Tanoto, who sings for False Plaintiff in Singapore. Shahil’s friendship with Brandon grew from Facebook messages to the band and further connections and time spent together. “When that section of “Cavity” was written, I knew it’d be the perfect spot for him to lay down some vocals and it’s easily one of my favourite parts of the album.”

The rawness that Idle Eyes express emotionally is tough to hear at times, and “Sundown” is one of those tracks. It comes coupled with a dissonance, where the vocals seem almost at odds to the track. I asked if the intention of this was to express the frantic desperation carried by the song. “I guess subliminally that’s a great way of interpreting the heavier vocals on “Sundown”. Originally I wanted to sing the verses and scream the choruses, but I couldn’t quite get it in the studio and with limited time I just decided to go with what I knew. But I really dig that way of looking at the song.”

“Sink” is beautifully done on all fronts, seeming to peak with layered vocals. Idle Eyes have aimed the track toward people who build up a negative front toward you, then change to something completely different once they realise they can’t control you. Shahil shares that it’s a mixture of anger as well as the calm that comes with “giving up on them and just wanting them to fade away into the background of your life again.”

As an emotional reprieve from the rawness as well as a beautiful breather, “Interlude” still evokes emotion. “Originally the interlude was just the intro to “Crows Feet””, Shahil shares, “But we thought it might have been a bit too long so we cut it down for the video and separated the two on the album. But it’s something that we just absolutely couldn’t leave off because of how fun it is to play or sway along to.”

“Crows Feet” is a tough track to hear, someone recognising how they negatively impact another that they love. It’s made homely with its music video which features nostalgic objects. With that theme coupled with the gorgeous aching guitar, it seems even more painful. Shahil affirms the feeling by saying “Lyrically it means the most to me. It’s kind of the apology or coming to terms I had with how my relationship with my parents went down hill. I beat myself up over it still but writing that song really helped me realise the changes I needed to make with myself and repair the damage that had been done on both sides. We shot the video clip at the house I grew up in and where a lot of the subject matter happened. After things fell apart, the back room was just kind of left empty, so when we needed a location it felt almost surreal to be doing it there for me. There was a time in my life that I never wanted to step foot back in there, and then here I am with my band shooting a music video in it. I’m happy that over time things have gotten better there, but that was such a weird trip for me and made the song so much more personal than it already was.”

“Wasting Away” seems to talk similarly about the negative bonds of home. Shahil says the track was written prior to “Crows Feet”, and captures exactly how he felt at the time. “I just didn’t want to be at home. I was stuck in a constant routine of waking up, going to work, and desperately trying to come up with something at the end of the day just to delay going back there again. I’d usually live out of my car on the weekend and just sleep on someone’s couch or floor, wherever I crashed first. Oddly the way it fits the record is like a conclusion. To me it was the first feeling I had on this record, and if that’s how others see it that’s fine, all art should be subjective.”

Bitter Work‘s final track, “Worry You”, has a really beautiful sense of resolution, despite the uneasiness that exists within it. It was the last song written for the album, with the full eleven tracks taking approximately two and a half years to write. Shahil shares that the final song came about “after everything had kind of run its course and my life had completely changed. I felt like I had two roads to go down. I chose the one where I was okay, rather than desperately looking for something more, or for things to just magically be better for me. This was one of those songs that I barely had to think about, it just came out as naturally as it possibly could, which doesn’t happen for me very often. I’m someone who sits there and debates every line, but “Worry You” really just sums up the whole album for me. As bad as things were I knew that once it was all behind me I had to just take it as it was and move on.”

Take time with this beautiful and emotionally real album:

Hey Perth friends! Find Idle Eyes in support of Movements tonight, along with Eat Your Heart Out and Shangrilá. 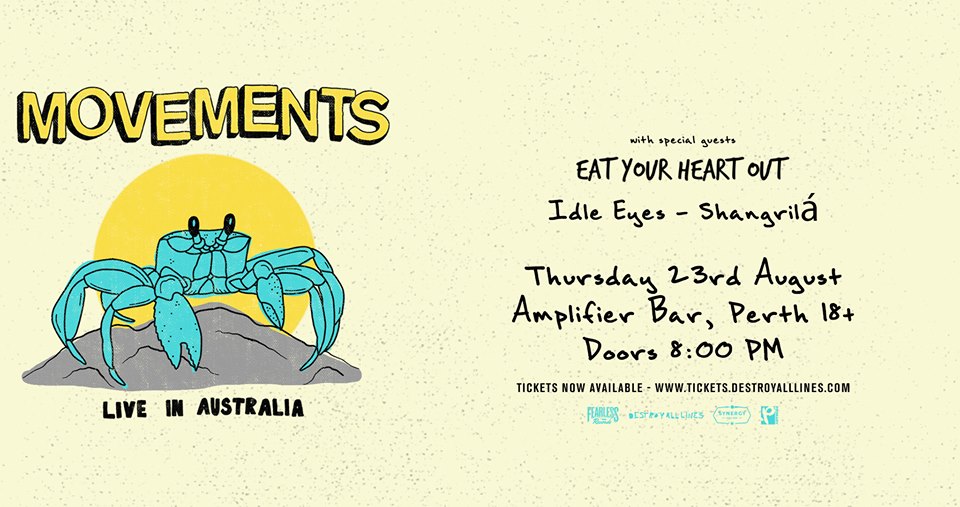 Watchtowers - Hurt The Ones We Love (New Music)