You may have noticed that we have a new writer on the Depth team! Adam Horstmann has arrived, seemingly out of nowhere, and I’m stoked to have his voice and thoughts about music in the mix. How we came to be connected is hazy, if I’m honest, but it all seems very serendipitous.

I had asked Adam to write for Depth as a tongue-in-cheek comment at first. I’d appreciated his intelligent commentary on music that he’d shared on his Instagram story and felt like it was very Depth-y. To my surprise he’d actually been looking for such an opportunity and he agreed immediately, which is when I learned that he was already an experienced music writer. And now here we are.

“If you can’t handle me at my Carly Rae Jepsen, then you don’t deserve me at my Siberian Hell Sounds.” ~ Adam Horstmann

A deep passion for music and writing is how Adam came to be a contributor for Adelaide based publication Chucking A Mosh, which shut down in 2015.  While he’d originally had career aspirations to become a journalist for a music magazine, the surge in popularity of blogging derailed that idea due to the saturated market of free reviewers. Undeterred though, Adam says “This crushed my aspirations for making a legitimate career out of it, so I decided to just continue writing as a hobby.”

Similar to my own story, parents’ music tastes and the ABC have a lot to answer for. Adam’s father’s vinyl collection was how he originally discovered alternative/heavy music, saying, “One of my earliest memories as a kid is locking myself away in his bedroom and obsessing over his stash, which included everything from Black Sabbath to Dead Kennedys.

“Throughout my teen years it was ABC’s Rage, Recovery with Dylan Lewis, Triple J, and Channel V’s Heavy Shift. Growing up in Adelaide I was extremely fortunate to be exposed to the underground punk/hardcore/metal scene that was exploding during the 1990’s. I was a loner and my weekends were usually spent hanging out at my local Big Star Record store.”

The first record Adam ever bought was the self-titled album by US post-hardcore band Rites Of Spring, which was the only studio record they released. Adam says “The band only played roughly fifteen shows but were one of the main acts of the 1985 Revolution Summer movement that took place throughout the hardcore punk scene in Washington, DC. The term ’emo’ coined back then was originally an insult and the band hated it. Lyrically the band was like nothing else hardcore had experienced…yet. Vocalist/guitarist Guy Picciotto and drummer Brendan Canty went on to create Fugazi with Ian MacKaye from Minor Threat.”

Adam’s new music exposure was also impacted by the music tastes of bands and artists that he admired. He explains “As early as I can remember, long before streaming services like Pandora and Spotify were giving me suggested “bands I may like“, I was obsessed with discovering what artists my favourite bands were listening to. At a very young age I developed investigative journalistic skills where I would scour magazine interviews and the internet for any leads onto the artists that were in part responsible for inspiring the bands that were inspiring me. If Robert Smith and Ian Curtis had a list of their most influential artists, I had to know who they were.”

Adam recalls two pivotal moments relating to music that are etched into his psyche. His first live show is one of these moments, when his father took him to the 2001 Big Day Out to see At The Drive-In. Adam says “It was my first live show and it was life changing.”  The second moment was Adelaide’s 2003 Prepare To Burn Festival. Adam took the picture below of a “promo poster I pinched on my way out.”  He adds “The line-up speaks for itself.” 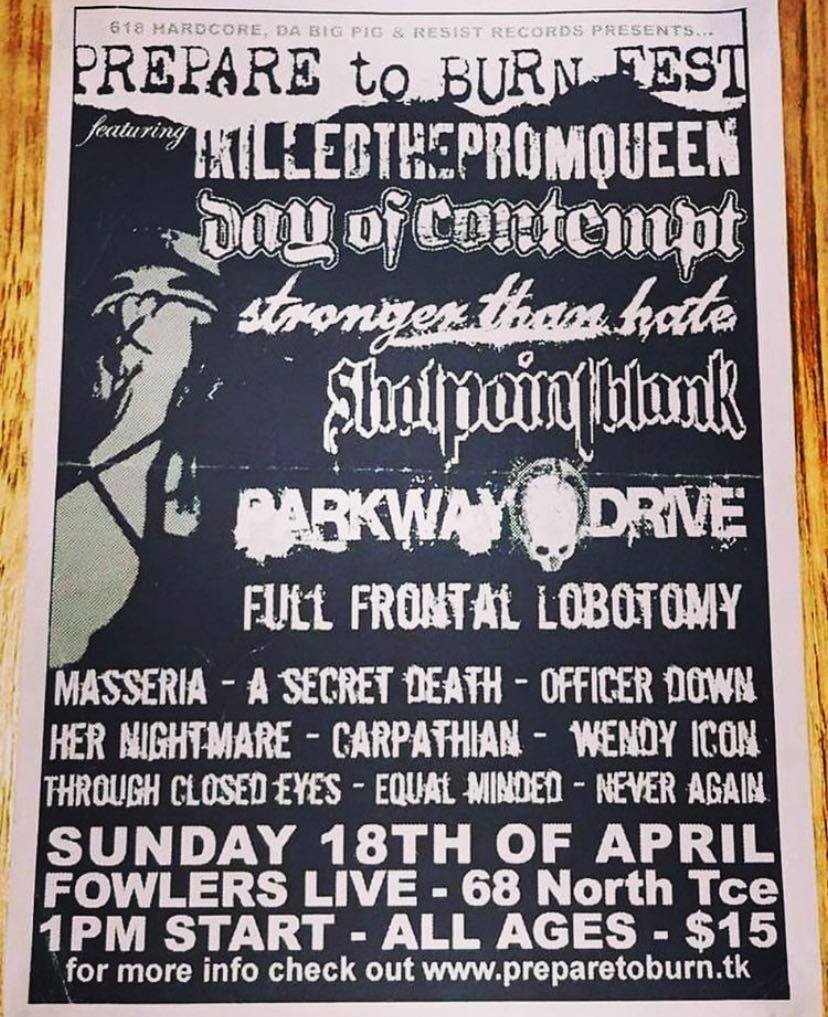 For Adam, music provided an important outlet in his life. He grew up in what he describes as a “fairly religious and conservative household”, and Adam shares that music was “a safe place where I could allow myself to feel and express certain emotions that I had been taught to bury.”

As you might imagine, deep thinkers have noisy heads, and this is where writing has been a welcome outlet for Adam too. He says “I’ve always been plagued with this never ending barrage of thoughts that continuously race through my head, which can best be described as a never-ending explosion. For as long as I can remember I’ve had an obsession with dissecting and analysing the world around me in order to better understand it. Writing has always been a cathartic method I’d use for slowing down those thoughts. Meditation works great too!”

Adam feels that writing has been an essential way to learn about himself, as well as how to effectively communicate what he’s thinking. He says “I firmly believe that everything from the maintenance of civilisation to the moral progress of our species depends on a series of successful conversations.”  Hear, hear!

Adam has plenty of suggestions for anyone aspiring to write that are applicable whether the subject matter is music or something else. He says “My advice for anyone aspiring to become a writer is to read plenty and to simply just do it. It sounds obvious but to first become a writer you need to start writing. Keep a journal, read everything (this includes things that you disagree with). Surround yourself with people who disagree with you so you stay sharp. I often just write random thoughts into my notepad on my iPhone and at the most random of moments. Above all else stay true; write from the heart even if it may upset someone. You’re not writing to make friends, you’re writing for the love of it. Keep it honest and the reader should appreciate that. Real recognises real.”

Specific to Depth, Adam says “I love Depth because everyone here is devoted to their art purely for the love of it and the integrity of our entire Depth team shows. I believe people are starved of authenticity these days.”  Looking forward, as well as attentively sifting through the pile of music I intend to shove in his direction, Adam is keen to be out and reviewing local Melbourne gigs when the time comes, continuing to hone his skills in the process.

The Yours Truly Story