Following on from where they left off with “Never Rome”, Foxblood have released fresh new single “Carry Me”, along with a music video. Having gone through some line-up changes, the Melbourne based quartet is solidified as Anthony Syle (vocals and bass), Tom Beale (vocals), Bret Powell (guitar), and Aaron Beale (drums). They share “Carry Me” as the first taste of their upcoming album Grief & Mercy Sleep; their sophomore record releasing in 2019, following The Devil, The Dark & The Rain (2016).

From first listen, “Carry Me” reveals pretty hefty personal subject matter along with its metalcore intensity and polish. The single’s artwork of a dark, distorted, and breaking house is exceptionally relevant, and the same crumbling home is apparent in the music video by Neal Walters. Punishing instrumental pockets and soaring choruses are bracketed by honesty about familial connections, and how the personal struggles we go through affect the ones we love. This is powerfully expressed by aching vocals and wall-of-sound fullness than teeters on an edge of overwhelm.

Anthony described the narrative of “Carry Me” as hitting close to home for him. He elaborated by saying “I like many others have struggled with mental health issues over my life that have at times caused a strained relationship with my family and I. I have felt to be a burden on them occasionally but always know they’ll have my back and keep me going.”

The hard-hitting track – both beautiful and savage – as well as its future album mates are the result of the last two years of effort from the Foxblood camp. Tom shares “It’s hard to describe to anyone what this song and all of our upcoming music means to me. Two years of hard work and dedication, countless revisions and such fine critiquing has landed us with music that we are truly proud of. I’ve been writing music for over 10 years now and this music that we’ve made is the first thing I have ever been completely happy with. I have never been so excited to release our music to the world and I hope that many receive happiness from what we’ve created.”

Check out “Carry Me” below, and get keen for more from the Foxblood camp. You can also celebrate the single’s release at The Workers Club, Fitzroy, along with Bakers Eddy, Fever Speak, and Letters To Amara, on December 14th. Details below. 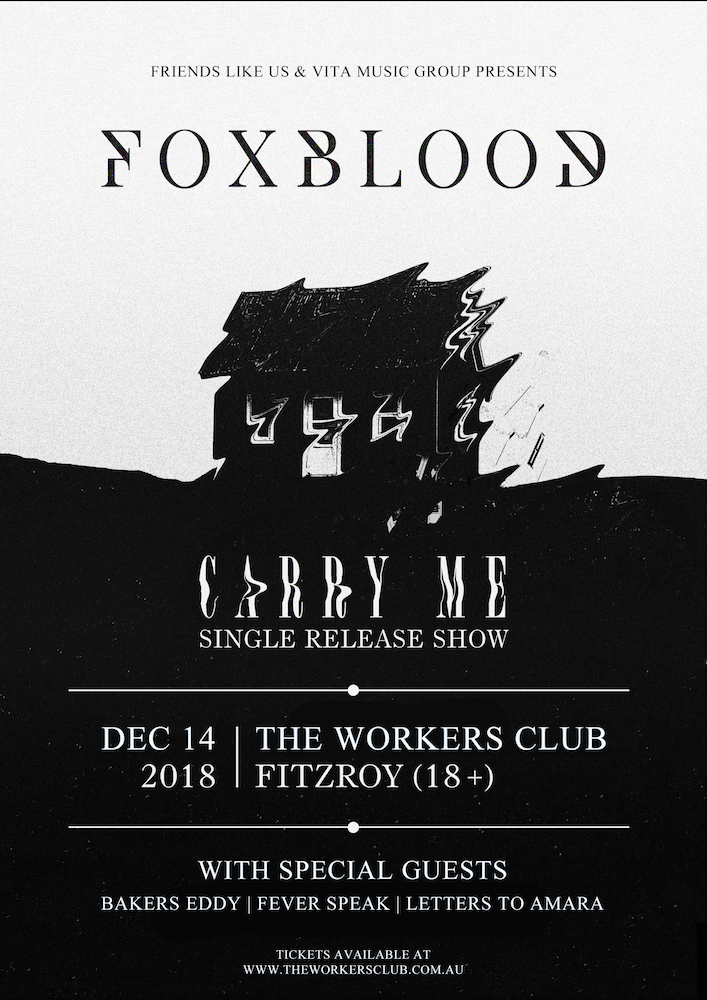