It’s no secret that Enter Shikari have been working on new music, but what a treat to get to hear some of it already! “{ The Dreamer’s Hotel }” single released today after premiering via BBC Radio 1 last night.

The new single is the first release after the end of The Spark era, and comes chock full of the Enter Shikari verve and fire that we know and love. Presenting two flavours of sound, “{ The Dreamer’s Hotel }” is stomping and noisily intense at its thick verses, and then joyful at its choruses. Playful and infectious of voice and instrumentation, the song swiftly sets up camp in hearts and mind, as it shifts between the two ‘sides’.

“{ The Dreamer’s Hotel }” immediately reminds me of the viciousness of social media and the lack of grey area that can occur in conflicts and ‘cancelling’ of people. In a furious lather, with intent to destroy reputations, fiery tweets can create a narrative in an instant that drowns out the truth. “{ The Dreamer’s Hotel}” lyrically hooks into the black-and-white, good-and-evil experience that can happen, with hatred fueling the experience.

“Meanwhile, back at The Dreamer’s Hotel”

Just like songs of The Spark, Enter Shikari offer more than just doom and gloom, and do so with metaphor that easily pulls you into their view. A metaphorical hotel for dreamers, sits waiting and unused, perhaps highlighting a choice that’s not commonly taken. Maybe we could check in, look through the “rose coloured windows”, have a dance, and be peaceful, instead of taking hateful aim at others without consideration. The closing lyrics capture hatred as “well fed”, and the undernourished/neglected/unchosen metaphor continues.

I’m looking forward to hearing more from Enter Shikari, using their creative voice to explore modern society in all its challenges and experiences. According to Kerrang, the upcoming album is entitled Nothing Is True & Everything Is Possible, and has possibility as its central theme. It’s set to release on 17th April via So Recordings.

There’s a music video to come, but in the meantime, check out “{ The Dreamer’s Hotel }” via YouTube below. Album artwork and tracklisting is below. 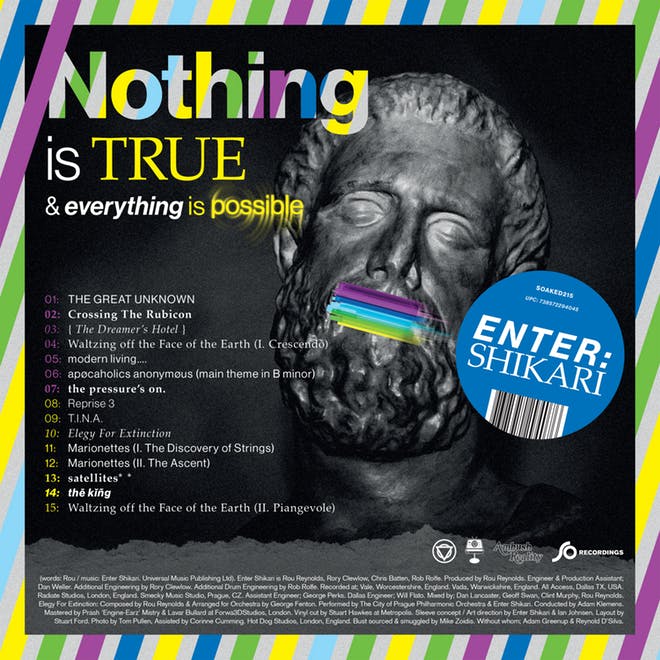