Download Festival kicks off later this month, with 2018 being its inaugural stint on Australian shores. 29 local and international bands will converge onto Flemington Racecourse and take heavy music fans through their paces.

Rowan Donohue and I will be there on the day, and though I suspect I’ll be dashing from stage to stage so as not to miss anything, here’s our short-list of must-see sets!

There’s no way we’re going to miss Californian nu metal veterans Korn. Korn’s appearance at Download is their only Australian show. There are no second chances here!

If recent setlists are anything to go by, Korn’s set will be a sweet spot showcasing infectious grooving bass slaps and darkly themed edge-of-sanity lyricism, featuring tracks from The Serenity of Suffering through to their 1994 self-titled album. With a sharp eye on their stage production, this is bound to be a stand-out experience of the festival.

Like Korn, Good Charlotte have impressively maintained a foothold in the scene, releasing hit after hit since their formation in 1995. We can’t wait to see what they choose to play from their lengthy discography of high energy pop punk anthems, including “The Anthem”, “Girls & Boys”, and their most recent release “Awful Things”.

I need to behold the spectacle that is Ronnie Radke in the flesh. To soak up some of the deliciously vicious lyricism, and to see how the Las Vegas rockers work the crowd. As well as anticipating some interesting band-crowd interplay, Coming Home had some straight up masterpieces on it that I’d love to hear pouring out over a crowd who is just as into it as I am. With a recent twist on the band’s sound, releasing the more electro-fused “Losing My Mind”, it’ll be interesting if Falling In Reverse have more to share from that angle.

Have the Falling In Reverse experience in the flesh: Dogtooth Stage – 4:50pm – 5:30pm
Do some FIR listening homework via Spotify [here].

I’m keen to see Trophy Eyes mostly because I hope they spill a new track or two during their set, along with playing freshly released “Hurt”. But as one who worships every second of Chemical Miracle, anything the Newcastle five piece want to play is fine with me. I just don’t want to miss their set and I will be there screaming “WATERRR! RAN FROM MY BODYYYY!” along with the rest of the crowd. Can’t wait to soak up the festival vibe during the Trophy Eyes set!

Any chance to see this band live needs to be taken. The Melbourne five piece have been touring like crazy, and it’ll be great to see them on their home turf (haha, race track related pun not intended). We’re keen to see the Odd World guys of Ocean Grove having a great time on stage while pumping out The Rhapsody Tapes tracks. Also keen to see what quirky get-up they’ll be doing it in.

Craft your very own must-see list with the Download Melbourne set times below. You can also get your hands on tickets at downloadfestival.com.au. See you there! 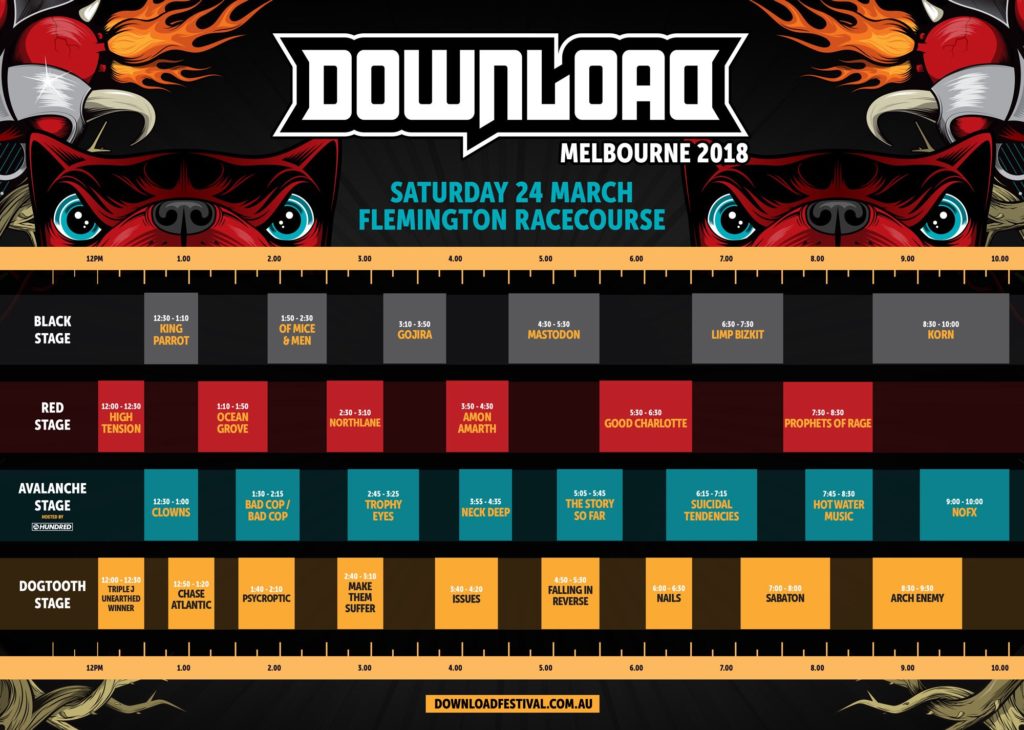