Unique: adjective, being the only one of its kind; unlike anything else. Synonyms: distinctive, individual, Dance Gavin Dance. We sat down with the one of a kind band’s guitarist, Will Swan, to chat about their upcoming tour, new album and more.

Moving quickly into the band’s impending visit to Australian shores alongside Veil of Maya in February 2019, Will was quick to express his excitement for the tour. Taking note of the three years since their lost stopover, he immediately declared his love for Melbourne. “We love coming to Australia, it’s one of our favourite places. The weather, the cities are all great, but I especially love Melbourne.”

Despite residing in New South Wales, I was quick to agree (sorry Sydney), and we came to the mutual conclusion that the city was undeniably world class. Shifting into the finer details of the tour, I questioned Will on the band’s expectations for the tour to which he conveyed a deal of surprise that three shows have already sold out. “We didn’t expect it. We’ve been building our Australian fanbase for our whole career but we just noticed this huge boost down there and the fan reception to the last few albums has been amazing.”

Even through a dodgy phone line it was easy to hear the delight in his voice as he continued. “We’re just really stoked that people are showing their love and getting their tickets early. We’re gonna come down there and go crazy.”

We continued talking about the tour, as the conversation moved to the interesting package they were bringing to Australian shores. Dance Gavin Dance are a band that do not know genre bounds, touring with a band heavily cemented in the metal genre, yet Swan justified it simply: “They’re a great band, super talented on all levels. I think their musicianship is on the same level as ours and it’s just really intense. Everybody is going nuts at their instrument and it just makes the show make sense.”

Speaking of how their own music might translate to traditional metal fans he continued, “We ourselves are kinda over the place. We’ve got some really heavy songs that mix well with metal but we also have some songs that Veil’s fans might think “woah! this is nothing like metal”. But yeah, I think it’s cool! Their fans are really open minded and so are ours, so the crossover has been great.”

To talk about the reason the band were touring in the first place, I shifted the conversation over to the release of the band’s eighth (yep, EIGHT) album, Artificial Selection. No artist goes through that many releases without change so I questioned Swan on how Artificial Selection stood up against the previous seven releases. “You know it’s interesting. Each record is its own thing, we kinda try not to compare because they’re all representative of their own time and what we were feeling while we were writing them.”

I’d heard him say similar things in previous interviews but his elaboration made enormous sense as he continued. Mainly focusing on his own inability to compare he conveyed “We normally spend about a month and a half writing a record so it’s like a time capsule for that period. To compare it to any of the old stuff is really difficult on any level for me.”

Likening Dance Gavin Dance albums to children he amplified that same sentiment with a hint of laughter in his voice. “I really try to separate them personally, like they’re my kids you know. You don’t want to favour one because then the other ones are gonna start to feel bad.”

Interested in their streamlined writing process, I questioned how it could be possible for the band to create such consistently great releases in such a short time. When asked about external influences on the band’s writing Swan explained that there was no interference from third parties, whether it be fan or label expectation or anything else. “It’s just whatever we’re feeling really”, he expressed. Citing his own writing influences, he continued, “I just try and listen to a lot of music and try to find new stuff and new styles to incorporate. I look for new directions that we want to take huge leaps in and see what we end up with. We’re just constantly challenging ourselves.”

Anyone familiar with Dance Gavin Dance would undoubtedly be aware of the group’s ability to write killer choruses, and I was curious whether there was always a concentrated effort to make the song’s choruses pop. “The catchy chorus is very important to us.” Swan explained. “We all like a lot of popular rock and just stuff that bangs. Even 70’s rock like Led Zeppelin has killer choruses. It’s just part of writing a good song.”

As one of the band’s chief songwriters he was immediate in his modesty, heaping praise to the group’s clean vocalist, Tilian Pearson. “Tilian is just a master at coming up with weird, off the wall melodies and we love that because musically we’ve always been weird and off the wall”.

Persisting in voicing applause for the frontman he continued, “Tilian’s a vocalist whose ability matches our skillset as musicians so it’s really important to us and to him that the songs pop and the choruses pop especially.”

For a band that’s been around for thirteen years, I questioned whether there was any real key to the band’s longevity. With Swan having being around for the entirety of the band’s existence, he was well equipped with an answer. “It’s just willpower man. A lot of things happen when you choose to be in a band and it’s a tough road. You’re far away from your family a lot but we’ve just had a core group of members who’ve been willing to tough it out and keep moving forward.”

He continued to thank his band members for sticking it out alongside him and shared that despite being a veteran of the scene in his own right, he really wasn’t sure if the steps to success were that easily defined. “Looking at how or if there’s any key to success, I have no idea what it would be. It’s just blind luck that we’ve been able to maintain this for so long and we just continue to do our best and hope that things work out.” Hear that kiddos? Just do your best.

Having mentioned that a core group of members had helped the band succeed, I queried about the plethora of lineup changes the band had undergone in their history. As the band approach five years without a member change, Swan expressed that the lineup stability had greatly improved the band’s dynamic.

He articulated that the greatest improvement that came with a stable lineup was within his own writing. “It just makes writing so much easier. When we were switching vocalists back in the day it was really tough on me, because in writing I wouldn’t know exactly what to do to cater to who was going to handle vocals.”

Mentioning that he would often end up writing things that just didn’t fit with the direction the band were following, he once again lauded the help of a solid lineup. “It’s been really cool having a vocalist and members all set in stone because now we can cater to everyone’s strengths. It makes us more efficient at our writing process and at being able to achieve what we want.”

The band also just had their own cover of Third Eye Blind’s “Semi Charmed Life” included on the Hopeless Records’ Songs That Saved My Life compilation. Curious to whether any other songs had come into consideration, Swan stated his own desire to cover R.E.M.’s “Everybody Hurts”. “I just didn’t have time to arrange it because I was recording with my side project Sianvar but the cover came about because we were approached to do a cover for a good cause.”

Following that, he described the band’s own justification in choosing a cover. “They wanted a song that had meaningful lyrics that saved our life, or made a positive impact on our life. It was a tough to find a song that fit all the criteria and actually worked for us, but “Semi Charmed Life” was what we ended up with. It’s from a record I love so it was fine by me.”

Circling back to where we began as our chat ended, I wondered what fans of the band could be expecting on their upcoming dates. Since the band were unable to reach Australian shores off the back of the previous record Mothership he was reassuring in his promise that the band’s set would be diverse.

“We never want to come out and just play all new stuff, I would hate that as a fan. Even if I dig a band’s new record, when I go to a show I want to see my favourites,” he explained. He continued on, clarifying that bands deal with playing songs they don’t like in order to please their fans. “Personally, we don’t have any songs that I hate. But sometimes you get bands that will say “man I hate playing this song!”, but they still do it because the fans want to hear it you know?”

“I like playing all our songs and as we progress it’s difficult with the amount of songs that we have to choose a setlist.” Joking about the internal band conflict that arose when deciding a setlist he laughed, “It’s debated every time we tour between band members, but somehow we always end up with one every tour.”

You can catch Dance Gavin Dance when they reach Australian shores this coming February alongside Veil of Maya. 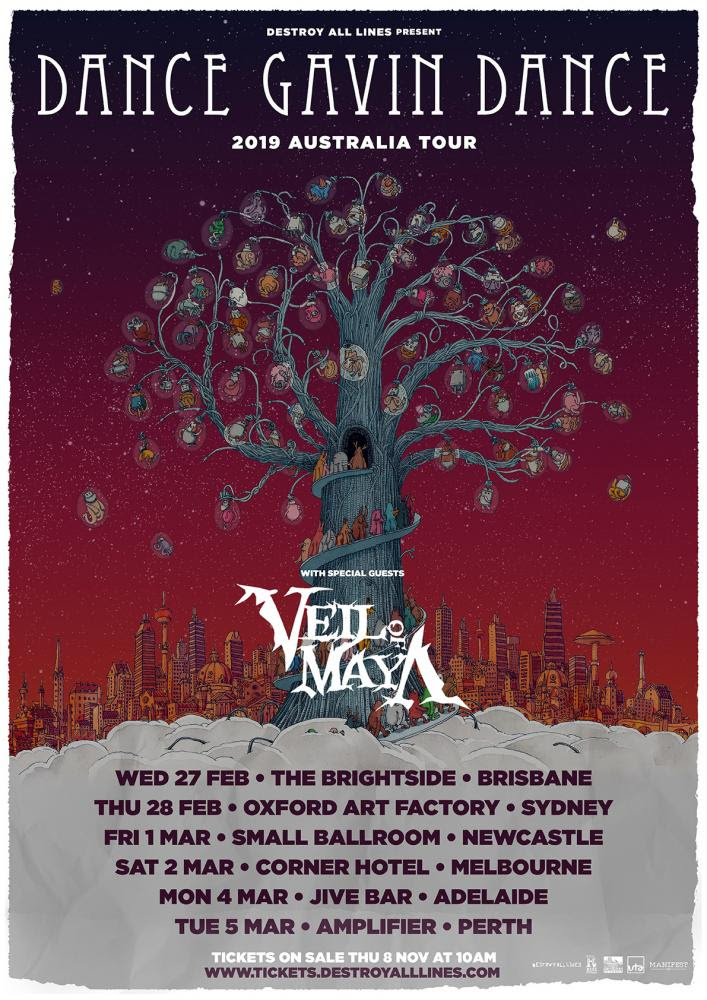 Justice For The Damned - No Brother, No Friend (New Music)