Fun loving Sydney alt-rockers Dear Seattle are back with their brand new single, “Maybe”. Out via Domestic La La, this anthem for the lost and unmotivated made its debut last night via triple j’s Good Nights, and was released fully today accompanied by a shenanigan-filled music video.

“Maybe” is an upbeat tune about not knowing where to go in life, inspired by the personal experience of singer Brae Fisher. Brae shares that “Maybe” was written in his head while daydreaming at a pub, while drinking with two mates. “I had been unemployed for the better part of the last 18 months and was living off my savings, watching it whittle down to nothing week by week, but showing very little care about it.”

A moment of realisation struck Brae while in this state. He says “Before too long it all hit me at once, the whole ‘What in the actual fuck are you doing with your life? You’ve got no money, no work ethic and no aspirations’, and I just felt like absolute shit and I hated it. Thankfully, that thought finally kicked the drive into me to try and fix it and do something worthwhile.”

The lifestyle of apathy is reflected by the verses, as lightly toned guitars make you feel like you’re slumped in a couch and about to nod off for yet another afternoon nap. Lyrics spit out excuses and justification for procrastination, reminiscent of days spent daydreaming and feeling free. In Brae’s words: “I would do nothing all week, basically just waiting for my working friends to finish their days so we could all grab beers and/or hang out.”

“So now I bum around,
I’m settling down for another cheap round
and thinking ‘maybe’.”

“Maybe” is poetry for the people that don’t know where to go. They don’t know what direction to head in, and they don’t know what to do with their lives, but aren’t really craving something other than where they’re at. Brae was firmly in this rut when he wrote this song, saying: “It got to the point where I would sit there daydreaming while my mates gave the rundown of their work week and just think, ‘Oh yeah, maybe something will pop up for me soon’, but it was a completely empty thought. I didn’t want anything to pop up and so I did nothing about it.”

“I don’t wanna go to university,
cause I don’t think they offer a fuckwit degree.”

Hitting us with big choruses, “Maybe” demonstrates Dear Seattle’s full ability to write ridiculously catchy tracks. The ‘da da da’s and the ‘ooh ooh ooh’s roll with the hard snarling guitars and gnarly drums in a way that they can get easily stuck in the listener’s head. Just like their previous self-titled EP, everything comes together perfectly and rocks hard.

As well as dropping “Maybe”, Dear Seattle have announced two single release shows for this weekend. They’ll be hitting up Melbourne and Sydney, and bringing Sly Withers and Towns with them. They also have upcoming performances on the Yours and Owls Festival, and are supporting Trophy Eyes on The American Dream Tour.

Sydney fans, there’s no excuses not to come along; your entry is free to Frankie’s! Old Bar tickets are available on the door. 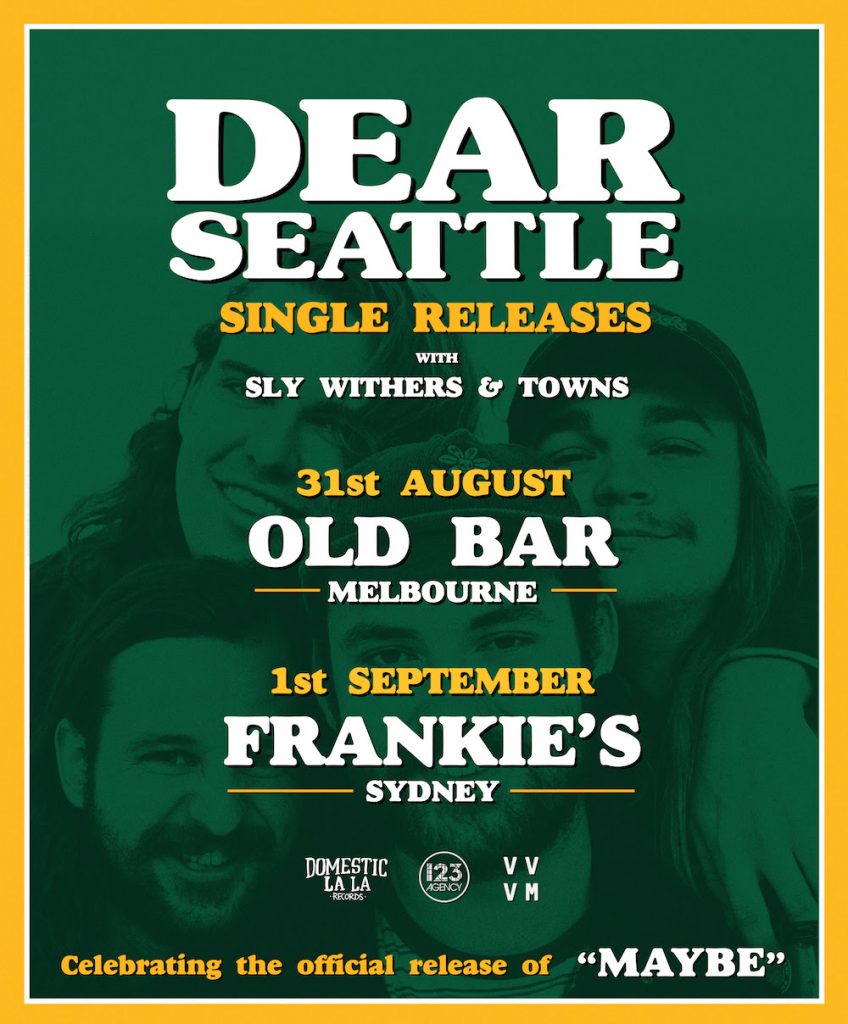 Premiere Stream: Wildheart - We Are