With the amount of shows that Deadlights have done in support of other bands since the release of Mesma (namely Belle Haven, Thy Art Is Murder, Polaris, Counterparts and Stray From The Path) it was fantastic to see them announce a headline tour of their own. Kicking off in Melbourne, we were at Reverence Hotel to see the Brisbane post-hardcore four piece in action.

I’ve never been to ‘The Rev’ before this show. The band room is a separate building at the back of the pub. The band room itself was a dimly lit and wide open eclectic space with retro wallpaper and cushioned benches along the walls. Perfect for talking with friends in between bands, checking out the merch and talking to band members, or hitting the bar.

Melodic hardcore band Wicked Figures opened the night. This young band took time to warm up in their set, at first seeming a little scattered. Their decent songs, the clean vocals, and the interesting soundscapes to lose yourself into were positive features of their set that I enjoyed. They worked hard to draw the crowd in and get a mosh happening, and also featured some nice breakdowns. But the band’s lack of cohesion/unity made it hard for me to fully get into their set. Clearly passionate about music and their band, Wicked Figures can only get better from here.

I’d seen Cast Down a few times before this show (most recently at Download Festival), but their set at The Rev was the best I’d ever seen them play. The Melbourne hardcore band brought high energy from the start and came at us with crushing heaviness and it was easy to get into it. Slick tandem vocals and ominous grooves had me feeling like I needed to listen to a whole lot more of this band. Never seeming to lose grip of a commanding stage presence, the use of electronic samples/tracks between sets worked really well in keeping things flowing.

Reflecting this impressiveness, there was decent crowd activity feeding off the huge breakdowns and the ‘side to fucking side!’ pit calls. Despite Cast Down’s set seeming to end really suddenly, as well as a weird testosterone fueled moment where a few dudes took their shirts off and tried to break things, my notes had things like “these guys rule” and “I love this band”. Each piece was well done in this hectic yet flowing set.

Get some more Cast Down in ya: https://castdownhc.bandcamp.com/

I’ve never seen Life’s Ill before this show, but they come with a reputation of being dealers of heavy heavy music. Solid and brutal, it was as big as you’d expect, with deep growls and low breakdowns and a willingly obliging pit. “Still Ill” kicked the crowd intensity up a notch and things got wild in response to rapid-fire riffs and filthy growls. Standing in solidarity and with strength in their messages, Life’s Ill powerfully dedicated “Drowned” to the cause of domestic abuse. The band never eased on their huge presence and the set went out with a bang.

Known for their ‘weird’ take on music, this was the first full set of DREGG‘s that I’d witnessed (having caught only a fraction of them at Unify Gathering 2018). Fascinating and engaging from the word go, I fell for their riffs and the lyrical bombs thrown wide across the three vocalists. Humorous and with a lot of mic grabs going on in this now packed-full space, the set felt great from end to end.

Frontman Christopher Mackertich had us look at our hands for a moment, to remind us of our presence and the fact we were alive and there with them for the next 20 minutes. There was something intriguing about this and it made me want to get to know the band even more. Interview incoming.

Drum insanity, connective vibes, and two-steppers were all here, and I got the impression that DREGG wanted us all to use the set as our own personal release of sorts. The guys on stage led the way with their full-blown embracing of their own weirdness. This impression was confirmed by between-song sharing from Christopher who shouted out to the ‘hardcore kids’ and told us to think for ourselves, and not get ideas from other people. It was an unreal set in more ways than one, and I now more fully understand and respect what DREGG are doing with their band. Kudos to them. Go listen.

Despite Deadlights being the headliner, my notes on the band’s set are limited because I spent the majority of it dancing and singing along. It was such a good time for this Deadlights fan! Mesma got a lot of vocal/physical love from all of us as we joined in with the singles “The Mad Scientist” and “Attitude and Longitude”, as well as “Wavelengths” and “Suadade”. There seemed to be some issues with the stage lighting which saw the guys in darkness for some of the time (literally Dead. Lights. Heh heh.. I’ll see myself out).

The very animated and bouncy frontman Dylan Davidson included us all into the songs, and when I wasn’t moving to the music, I was watching the ever impressive Deadlights harmonies of Dylan, bassist Sean Prior and clean vocalist/guitarist Tynan Reibelt join forces. The guys of Deadlights have a great connection between them and are a lot of fun to watch.

Stand out moments were Sean’s “oh shit!” pit call, hearing “The Translator” live for the first time ever (the second time that Deadlights have played it), and the incredible pipes of Tynan Reibelt hitting insane peaks in the last song of the night “Invisible Hands”. With drummer Josh O’Callaghan going wild at his kit, the set felt like a runaway train we all had to keep up with, and it was over way too soon.

Catch the tour while you still can! 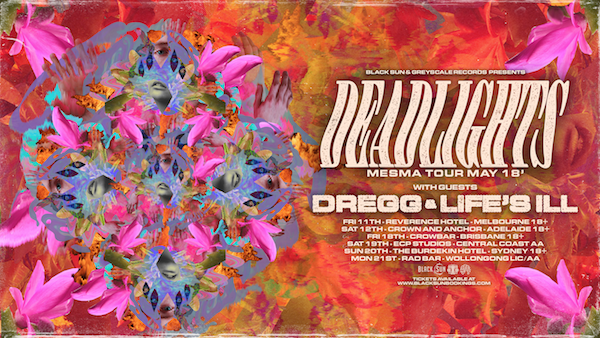 All photos courtesy of Brooke Harley.