Melbourne’s Alpha Wolf are a band to watch, with their unique brand of heavy music feeling both intense and honest. Their new album Mono is planned for release on 14th July, via Greyscale Records, and I had the pleasure to dive into the music of this new-to-me band, frustratingly only discovering them with their release of single “Golden Fate; Gut Ache”.

Alpha Wolf are Aidan Ellaz (vocals), Jackson Arnold (drums), Scottie Simpson (guitar), John Arnold (bass) and Sabian Lynch (guitar). The band have shared that while Mono was hoped to be open for personal interpretation, for Aidan Ellaz it is “An audio representation of utter desperation and the illogical mindset of an individual when one goes through traumatic experience. Whether it’s death, loss of love or coming to terms with mortality.”

Aidan shares that it means many things to each member, and that it was written ‘in times where the world is easily perceived as black and white’. He brutally shares the imagery that Mono is “The emptiness you feel when you are alone in a motel on the highway and your soul is bleeding out on the floor.”

The fact that the album cover is monochromatic (and greyscale!), and features a lone character and their shadow, seems to reflect some of that sense of aloneness. 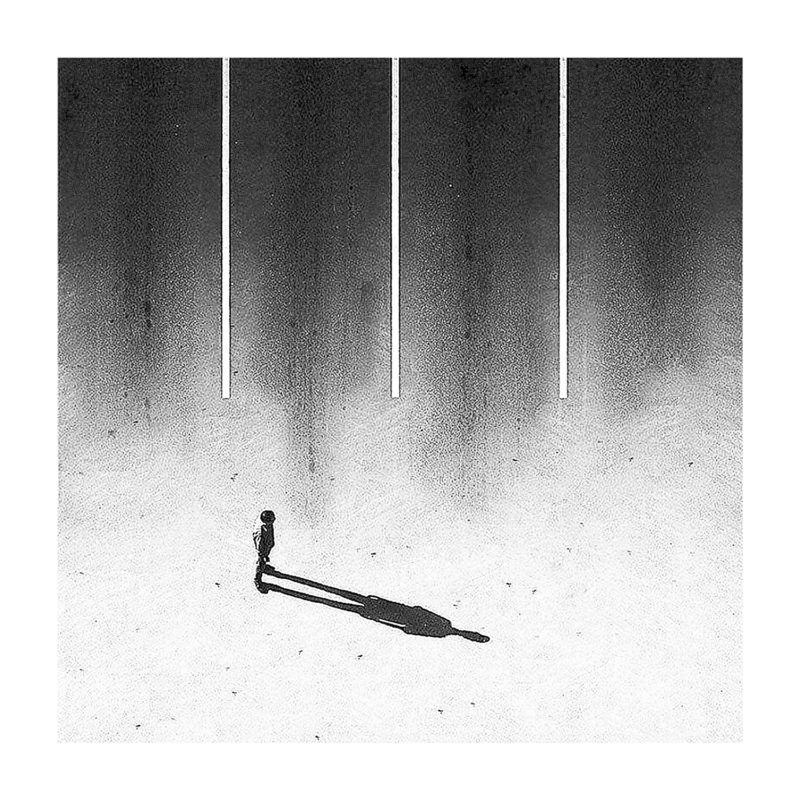 First on Mono is (the previously released single) “Ward Of The State”. It hits hard and with its 2:04 is already giving the clear impression of metal brilliance coming ahead on the album. “Ward Of The State” feels like someone having to sit in a state of discomfort with no means of doing anything about it. Vocally and musically, it’s a furious demand for those in authority to look at what they’ve done and what position they have put the person in, feeling like ‘Look at me and what you’ve done! Look how agonising this is, how terrifying and torturous this is! Do you even see?’.

This sense of shock also, like ‘What, this is considered ‘normal’?’. There’s a feeling of loneliness, not seeking companionship, but seeking someone to have their back in support and add their voice to the message of ‘this isn’t right’, in this situation where they feel powerless, knowing that something better is deserved. It’s incredulousness in the form of a heavy track.

“No. 2” is blistering from the outset and waves of heaviness rain down. Wrapped in this cloak of heaviness is a whole lot of heartache; hurting badly for what is lost. The world of the two fell into black and white-ness, and the intensity of pain of the other’s absence leaves the person in a world of blackness and overwhelming loss, around the clock.

The razor sharpness of vocals and relentlessness of the guitar feels like a sonic experience of acute pain, bleeding all over the track. Bombardment by drums and dissonant waves of sound feel like they are dragging downward, and worsening this state of pain into something more destructive. There’s no happy ending or sweet resolution to be found here, and you feel it. This is what seems to be the point of Mono; capturing these experiences as they are. And goddamn, what a track.

Third on Mono is “Golden Fate; Water Break”, which shares a theme of death with album ‘twin’ “Golden Fate; Gut Ache”.  It’s a tough track to listen to, feeling into its sense of disbelief at the loss of someone beloved (with ‘water break’ we could maybe assume a mother connection). I can barely acknowledge the impressiveness of the vocals and guitars in the face of this overwhelming grief.

There is something so raw and intimate here. It is as though something that would ordinarily be locked up has been prised open and allowed to leak out. The metaphors used lyrically and the force of heaviness feel like safe ways to be with the dark agony. But regardless it is pain-laden, real and impressive.

Next on Mono is “Shinobi Naku”, which is a Japanese word to describe crying silently without detection. Still reeling from “Golden Fate; Water Break”, the eerie melody of this track, coupled with the raw screams are again really tough to take. The track is only 1:49, but is an intense experience of extreme heartache.

The repeated crying out of “I will live alone and die” is painfully real, and its presence on a ‘breakup playlist’ would not be advised due to how real it feels. Unless you’re a fan of being punched in your already aching heart. Alpha Wolf aren’t shying away from genuine emotion here, instead saying impressively honest with these true-to-life experiences and capturing them.

“#104” is already a favourite of Alpha Wolf, having appreciated this track that had already been shared as a single. The continuation of “live alone and die” lyric from the previous track is something very cool, as well as what seems to be a continuation of what is shared in “Golden Fate; Water Break”. It’s reinforcement of how interconnected the tracks of Mono are.

It is black or white with “#104”: It’s hectic lyric-fire you can barely keep up with, or it’s dropped down a gear, dragging and slumped. With its subject matter (loss of a parent) it seems to capture the spectrum of emotion that comes with handling this horrific experience. There’s an edge of insanity here, reaching a point where the intensity of dealing with this feels increasingly desperate, to the point of contemplation of their own death. It’s yet another raw and real track from these guys, and the bravery in sharing this is impressive to me.

The sixth track “Promise Stays” gave me goosebumps from the start. Its monotone female vocal along with screamed vocals is both a little creepy and yet a perfect way to capture the non-existence of a lover; just the ghost of their memory. The entire track takes on this haunted edge, veering into obsessive brokenness with spoken vocals, a la Jonathan Davis’ wavering vocals with Korn.

There’s something skin crawling about “Promise Stays”, with its repetitiveness of lyric that we haven’t yet seen in any other tracks on Mono, and a relentless funeral march vibe that feels oppressive and intense. The hauntedness is captured brilliantly.

The title track is next on the album. “Mono” is so heart-stabbingly potent. It is a gentle and cinematic song, with intensely screamed vocals, that are clearly pained. It’s an avalanche of emotion pouring down, with strings accompanying this expression of rawness we are bearing witness to. It’s simple as a song, yet powerful; a moment of black and white, where something momentous is about to be lost.

“Should I say goodbye to the ocean in your eyes?”

It’s skin crawling and screeching, this heavy dragging sense of seeing yourself fall into failure, falling into places you never intended to go, seeing no way out, leaning into crutches that never keep you held up for long before falling yet again. I keep thinking how impressive this all is, and ‘impressive’ is how I feel about the ending, falling down and deeply into that hole, which flows directly into “Golden Fate; Gut Ache”, capturing an experience with the biggest ‘fall’ of all.

Sabian Lynch shared that “Golden Fate; Gut Ache” was written in response to a friend who took their own life, feeling that he should have been there for him, hoping to inspire others to be there for their friends in times of need. As you can expect, the track captures the very real emotions one might feel in the face of this experience. Describing the circumstances, the ‘what ifs’, the curious observations of this person before the event and trying to make sense of it all. It all feels like confusion, shock and regret.

This person, who they saw as being so strong, just needed a hand being brought back to life, but it wasn’t noticed, and they gave up on themselves and gave up on life. “Golden Fate; Gut Ache” hits hard in all senses of the word, and is also a beautiful tribute.

Tenth on Mono is “My Untold Memoir”, sung by Sabian Lynch. It’s deeply personal, capturing the funeral of his mother and his experience of it. The choice to share an experience like this takes incredible bravery, and it’s heart-achingly beautiful, capturing the disbelief in what was unfolding in front of him. What feels right here is to allow this song to be simply heard first hand, no further discussion needed.

The track “Epiphobia” led me down a rabbit hole to find out for starters what this word actually meant, discovering that epiphenomenalism describes the belief that mental events are caused by physical events in the brain, but have no effects upon any physical events.

“Where do I go? When will this stop?”

The track brilliantly uses layered vocal effects and irregular timing to capture something out of control and overwhelming. The phobicness being from the desire to stop feeling uncomfortable, mentally.

“Devon St” is the last song on the album. It vividly captures the experience of being in a family home after the loss of life. It’s tough to absorb and the toughness is also reflected lyrically:

There’s a shift in the song, moving from storytelling of this moment and into something lighter, after acknowledging that they are not the only one who has lost someone they love. It’s a moment of clarity and desperately sharing the message to “Grab someone you love, tell them that you love them and make sure that you mean it, ’cause you never know if that’s gonna be the last time you ever see them again.”

It’s a powerful and fitting ending to Mono, inspiring a sense of connectedness among a collective of people grieving, staying strong in this despite these dark experiences that have been moved through.

This album is something else. So powerful in the realness of intense emotional expression. Each track brilliantly captures something that’s genuine and at times too raw to truly be deeply immersed in. The guys of Alpha Wolf should be proud of their efforts on Mono and the powerful tribute it is to those that they have lost, as well as their own challenging times that they have moved through and lived to tell (sing) the tale.

Mono is a brave expression of intense and real emotion at its heavy finest. Impressively done.

Intense AF is the only 'negative'. You'll probably cry.

'68 - Whether Terrified or Unafraid (Track Of The Day, 7th July)