Alpha Wolf have returned from a hiatus, bringing new music, new video, a new line-up, and a tour announcement. The Melbourne band now features Lochie Keogh (of Earthender) on vocals, and sees Mitchell Fogarty officially on drums; the role he seemed to demonstrate effortlessly at Invasion Fest and on the Mono tour. The two complete the line-up with Sabian Lynch, John Arnold, and Scottie Simpson.

As a huge fan of the ache and edge-of-sanity unease that Aidan Ellaz’s voice brought to Mono, as well as to the band’s live performance, I was curious how a new voice would mesh with the Alpha Wolf I knew. New track “Black Mamba” was premiered on triple j’s The Racket last night and ended the suspense with thundering heaviness (and a social media reaction vibe of “You know what? This is going to be okay”).

Lochie has a long history with the band, sharing that he began as a fan and then became gradually more connected with the band, with everything lining up for his new role in the band. “Before Mono, when John stepped down from vocals, Sabian asked if I would be interested in joining the band, however I was focused on a project of my own at the time, as such I was unable to accept; and they went on to release one of my favourite albums to date. Soon after everything transpired at the start of this year, I found myself with a message from Sabian containing a link to a song now titled “Black Mamba”, once again Sabian offered me the vacant position; I wasn’t going to refuse a second time.”

“Black Mamba” kicks off with a nu-metal-esque introduction and swiftly builds anticipation with aggressive vocals over looping riffs. We’re drawn into the rabbit hole and sound collisions and raw vocals are part of the scene as we forge ahead with defenses prepared. Seeming to size up our opponent in the pre-chorus drum focus, the chorus is a very satisfying fight; where each gang vocal accent is a punch that successfully connects.

Assertive in seeking confrontation, “Black Mamba” is a stand against ‘snakes’; people who are cold and manipulative and refuse to take responsibility on what they create. Those who spark confusion in their actions and cause frustration in knowing what you can trust anymore. The track speaks like a refusal to take half-hearted crumbs of effort anymore.

Guitarist and Alpha Wolf’s founding member Sabian Lynch makes it clear that lyrics/concept of “Black Mamba” isn’t specific to the recent shifts in the band as could be assumed. “It’s so hard to trust anyone these days, you always find yourself with one eye over your shoulder, continuously on the look out for snakes amongst the grass. While I’m sure there will be assumptions made, the lyrics for this song started a long time ago, and are not directed at any one person in particular; the song is directed at humanity itself.”

Crafted by Ed Reiss, the “Black Mamba” music video powerfully expresses metaphors of containment and having someone you’re close to become more oppressive and toxic than beneficial in their presence; where arms entwined may as well be ropes. It’s disorienting an overwhelming which perfectly expresses a sense of drowning in life becoming suffocating and no clear way out – without the track’s demands for facing this.

“Black Mamba” introduces an impressively strong Alpha Wolf, with perhaps less nuance of emotion (so far), while still powerful in message. The sound and instrumental prowess is unmistakeably Alpha, and I’m appreciating the rapid-fire pull of focus as the track goes on, giving generous focus to all parts of the band.

To celebrate the new track, Alpha Wolf are having a one-off show at The Workers Club in Melbourne, alongside Gravemind, The Gloom In The Corner, and Lone. They’ll then be getting back onto the road again as they tour with Thy Art Is Murder on their Death Dealers regional tour with label mates Antagonist A.D and Xile. Details on both are below.

w/ Gravemind, The Gloom In The Corner, and Lone
SAT 03 AUG – Workers Club 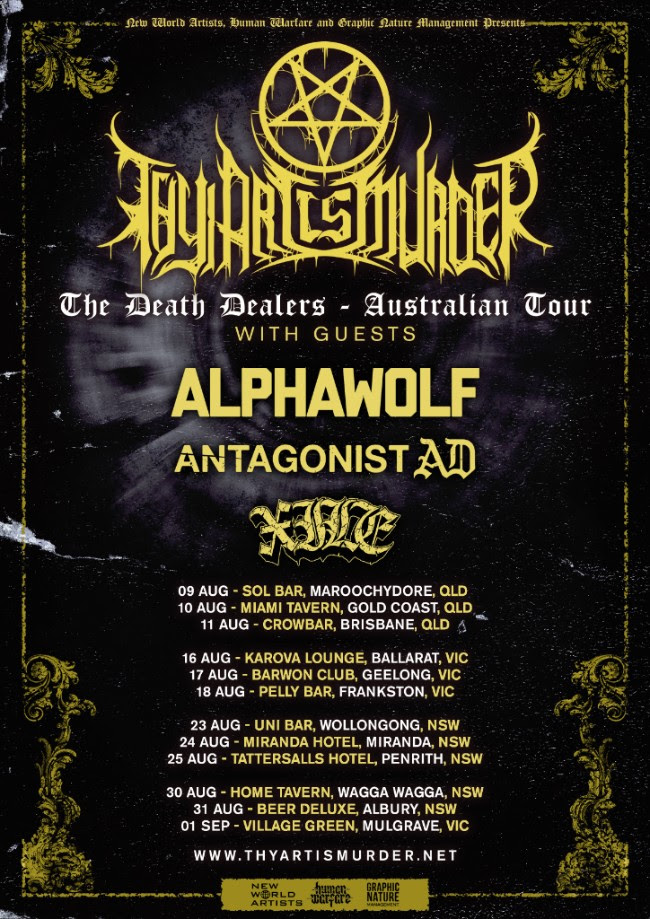 Real Friends - From The Outside (New Music)