Brisbane’s The Comfort touched hearts with their stunning What It Is To Be album last year. Yesterday they followed it up with the release of “Pain”. Released as a standalone single, “Pain” also comes with a music video created by Nick Hargans, landing a double punch with the new track and its message.

Prior to the release, The Comfort shared a statement that they wanted to be received in conjunction with “Pain”.  The statement oozes the “too little, too late” factor that seems to be the case when it comes to conversations about suicide, or states of mind that have suicide as a potential end point. When a life is already lost, it’s too late to help that human in pain, but does anyone want to know about it before then? Do we talk about pain or just when the pain was so bad it killed someone?

There’s frustration in this, where it’s clearly not good enough. Avoidance and smoothing difficulty over with masks or substances doesn’t help, and neither does supporting a “cancel culture” when the toughest of human states are revealed. A willingness to be uncomfortable and vulnerable is needed. The Comfort admirably do both. 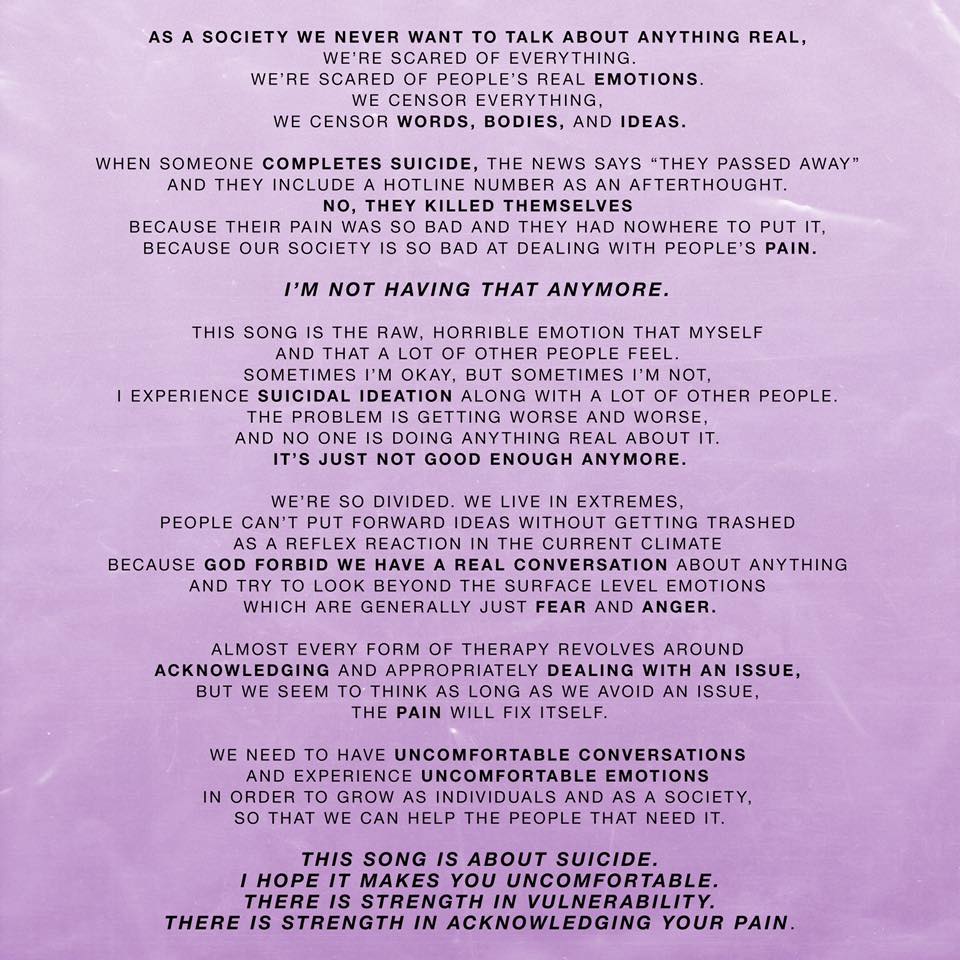 As you may have seen when I interviewed The Comfort’s vocalist Liam Holmes for our Mentally In Tune series, and also when I interviewed both Liam and bassist Dominic Harper together about What It Is To Be, mental health is a centrepiece of what the band create. This is NOT as a vanity topic for them, or mere lip service to appease fans or media, but comes about because of the band members’ own struggles. Liam in particular has been candid with his own challenges, and speaks through his music. As an example, Liam shared his journey (inner as well as global travel!) of using the medicine of Ayahuasca for his mental health via What It Is To Be.

Acceptance and acknowledgement is a key point of healing that The Comfort share. Their music is a reminder that we’re not alone, and that being present in our experience can be transformative.  They seem to have amped up this sentiment in this newest single, thrusting listeners into the discomfort along with them. This is as raw as it gets. “Pain” comes darkly, and reads like a suicide note. It also visually shows the perspective of someone heading through a city to a bridge to presumably take their own life.

“Will anyone remember me or who I could have been?”

It’s heartbreaking throughout, talking in past tense and shining the spotlight upon poetic lines such as “I’ll die under the stars so my soul will rise with the sun”.  The chorus is an unflinching farewell and it’s all we can do but to sit and take it in. Compassionate toward others in the life of the protagonist making it even more heartbreaking, “Pain” wonders what will happen after they’re gone, and how maybe the pain they’re trying to release in their death will become the property of their loved ones instead.

The discomfort in the statement makes sense when the finality of “Pain” is felt and hits like a thump to the chest. In amongst this farewell is doubt that the pain will even be gone at all in the ending of life, and there’s a nod of acknowledgement that unknown joys and loves of the future will be as gone as the pain created by the past.

Both ends of the spectrum hit as hard as the other. It may be just me, but I feel like Liam in the video crossing paths with his friend and band mate Dominic yet behaving like strangers brings this ‘unknown joys’ factor to life. At our worst moments in life, when hope is absent and nothing is bright… who haven’t we yet met that could change everything? What haven’t we thought of or discovered that could spark a purpose that leads us to somewhere that feels like our heart is at home?

Maybe it’s wishful thinking, but I take the soaring chorus of “Pain”, the light guitar melody of the verses, and the grit of frustration as something of hope. But maybe the gripping hands holding and shaking Liam in the bridge and the expansion into a lightness and glow mean that it’s as good as done; the “too little, too late” in visual expression. The thought of “maybe this pain will always be mine” is where “Pain” ends, and maybe this is the discomfort to sit in, literally as Liam sits on the bridge in the video, and encouragement to be with the pain instead of trying to outrun it.

“Pain” is another beautiful song from The Comfort, and I hope it sparks something in the ears and souls that find it. Watch via YouTube below, or find it at your favourite streaming places.

Above, Below - Labyrinth (New Music)