Our December was made better by hearing  “Dark Shade”. The sonic gem hit some potent emotional thumps, bringing Darwin based band Tapestry to our attention. Seems we are not the only ones who love belting out “Dark Shade”, because Tapestry have found their way onto Polaris‘s The Mortal Coil tour of Australia.

Also joining Polaris in celebrating their The Mortal Coil album will be The Plot In You with tunes fresh off their Dispose album, and Ambleside who we can’t wait to hear new music from!

We connected with Tapestry’s vocalist Tom Devine-Harrison to get to know more about Tapestry.

Firstly, I’d love to know who the members of Tapestry are and what their role in the band is.

The members of Tapestry are Ben (drums), Luke (guitar), Darcy (guitar), Connor (bass) and myself, Tom (vox). Besides the obvious roles of playing instruments and writing Connor, Darcy and myself don’t do a lot but Ben and Luke do a lot behind the scenes. In Darwin most shows that we play are run by Ben. He co-runs a promotional agency called “Terrorfest” which books most of the heavy shows up in Darwin and also has its own annual festival going by the same name. Luke is our little production whiz. He spends way too many hours working in his bedroom and before shows to programme our light shows and set them up.

The word ‘tapestry’ has so many connotations with different threads being woven together and creativity. Is that how you came up with the name?

We actually came to the name Tapestry from a quote on a chakra chart in Connor’s bedroom. We thought it sounded cool so we went with it. Not really too much in the story behind the name.

I know “Dark Shade” isn’t your first track, is this a deliberate reigniting/push for the band or just how it went?

It isn’t our first track but I guess it is more the track initiating where we started to take it more seriously. Like adding a music video, promoting and also since recording our new songs we’ve made a lot of new friends and met a lot of new bands that like and respect what we do and it’s helped us build more of a foundation for what Tapestry is pushing towards.

The shift in what you’re doing with the band seems to be working, with “Dark Shade” heading toward 50K streams on Spotify and over 7K views of the music video. Could you tell us more about the new chapter, in terms of the vision Tapestry is pushing towards?

“Dark Shade” has taken off better than we had imagined and its really great to see it doing as well as it has. As far as the vision of Tapestry goes, we just want to write music and play shows. I know I speak for everyone when I say the stage is our favourite place on earth and continuing to do what we do is our biggest goal. We can only hope the rest of the release does as well.

The topic/theme of “Dark Shade” is incredibly moving, talking about breaking a cycle of abandonment, as well as how that has impacted life and relationships and mental health, is this something that was vulnerably tough to share?

The topic of “Dark Shade” is something I’ve been wanting to share for a long time. I wasn’t sure about sharing it at first but music is how I vent and there’s certain things you just can’t put into a sentence when explaining things to someone, so I put it in a song and it seems that a lot of people relate.

Is it also a topic that comes into other music that you have in the works?

All of the new music is based around the same kind of subject. I guess you could say Dark Shade is an overall view of what I’m writing about and what I will write about in the future. Whilst a lot of the other songs on the new release are more direct.

You’ve touched on more global topics on the Growth EP, is that something you’re passionate about?

When we were writing Growth, I was deep into Northlane and Stray from The Path and a lot of other bands with political/ global directions about their lyrics. I guess you could say I was passionate about it before but at the same time I just wrote what I thought everyone wanted to hear. I still have a strong opinion about a lot of global topics but it’s not what I want to put into my music anymore.

By way of the new songs, can you tell us whether it is an EP coming or a full length?

The next release is going to be an EP. An album is currently in the works but we kind of needed a little test run for our new direction and we’re hoping it works out.

I was SO stoked to see you guys included on The Mortal Coil tour. How is that news being handled on your end?

Being included on The Mortal Coil tour is seriously the biggest news Tapestry has ever received. We love the Polaris boys, they’re seriously the best people and getting to go on the road with them is all we’ve talked about since they came up to Darwin last year. When we got the email, Luke called us all up to tell us and we were screaming.

Are you guys fans of the music of bands involved on the tour?

Well that is the next best part about this tour. We all love every band on the line up. They’re all bands we listen to everyday and Ambleside was actually a big influence on our original musical direction for Tapestry. We’re definitely going to be huge fan boys on this tour, you’ll most likely catch us front and centre in the mosh pit at most shows.

Tell us what it’s like for a band in Darwin to try and make it happen with their music. I’d assume it’s a hard slog, or at least much harder compared to say, a Melbourne band – a city where hardcore/heavy shows regularly sell out.

Trying to get our music out and expose ourselves as a band in Darwin to the rest of the country is an absolute mission. When telling show promoters or managers of other bands that we’re a band from Darwin, it doesn’t seem like we get taken seriously at all. Even when we mention to people that we’re from Darwin they’re in such belief that there is something of a scene up here. But I can’t say we’re alone in the struggle so we deal with the cards we’re dealt.

Catch Tapestry on The Mortal Coil tour – if you can still find tickets: polarisaus.oztix.com.au 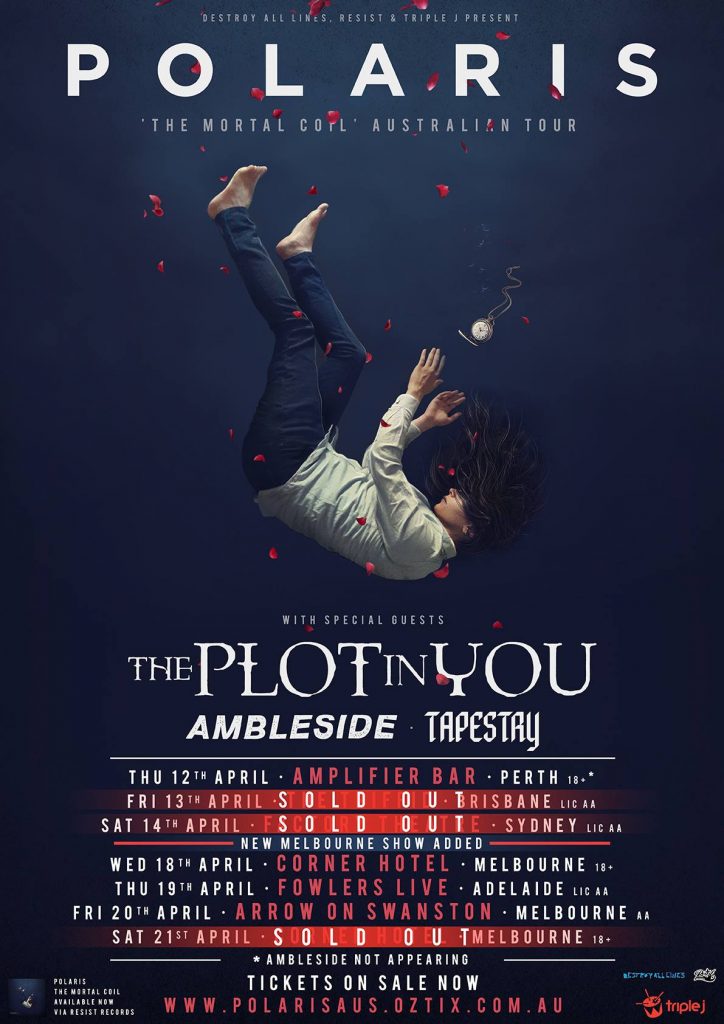