Orange County hardcore band Stick To Your Guns have never shied away from the darker sides of humanity with their music. If you’ve attended a gig, you will have heard frontman Jesse Barnett reinforce this by speaking passionately about self-responsibility and compassionate treatment of others. Their music is not just lip-service; they literally have no tolerance for ‘polluted views’, greed, and ‘misguided hate’.

As passionate defenders of rights, Stick To Your Guns have become synonymous with making a difference, using their musical strength and platform to bring hope to others. It therefore made perfect sense to me when I saw on STYG social media that the band have embarked upon an exciting new intiative: #HopeBringers.

We are incredibly excited to launch our #HopeBringers Initiative with you all today ❤️💎 pic.twitter.com/ZtLGQSON6O

We asked Stick To Your Guns’ drummer George Schmitz to share with us a bit about how #HopeBringers came about, as well as asking more about the idea:

Stick To Your Guns have always been outspoken and compassionate about causes and speaking on behalf of those without a voice. Can you talk me through how this has evolved into something that others are engaging with now?

Yeah! So Stick To Your Guns has always been a political, or rather, an outspoken band. We started with some more broad social critiques, and in recent years our politics have gotten particularly focused and maybe more specific, but we have a lot of fans that just generally associate our band with trying to make a difference in the world. Kind of that “Be the change you want to see in the world” Gandhi mentality. But what started with fans associating our band with daily struggles in their lives has turned into people associating our band with the work that they are doing with local organizations or within their community, and this has been incredibly inspiring to us. Everybody has their own individual struggles and self-care is absolutely important, but its when you want to extend that same sort of compassion and care to others that we can really start to change our culture. So that is what has really brought along this whole #HopeBringers Initiative. So many of our fans are doing so much amazing work and we want to share their stories and their work with others.

Are they hooking in to existing causes you’ve been outspoken about or taking your courage and going into other compassionate territory?

A lot of submissions have already came in and its been a truly surreal experience reading about the work everybody is doing. People can be good and humanity is not lost. We’ve seen submissions from people handing out hygiene kits and haircuts to the homeless, to somebody who is working as an advocate for victims of sexual violence, even to somebody working with an organization to make sure that bike lanes are kept up to code to protect cyclists and pedestrians. I love that #HopeBringers is sort of this big umbrella because it’s helping to showcase that there are so many ways that we can all give back and help others.

What has been the reaction of the band when seeing these things?

This whole thing is really surreal. We all thought the #HopeBringers would be a cool thing to try, but that maybe it was a little to abstract or outside the box so we shouldn’t get too let down if there aren’t that many submissions, but we’ve already gotten more than expected and the response has been amazing. We are even starting to see responses from EU/UK and Australia pour in which is also so cool. The initiative is just centered around North America right now, but if this goes well maybe we could extend it to other tours and other parts of the world!

Is there ever any doubt by way of if you’re cut out for being the ones to champion the causes on behalf of others?

We have zero credentials for any of this stuff. We are at best amateur organizers. All we know is that we have a platform and we want to use that platform to not only speak our mind about issues that are important to us, but to also do real, tangible work to help others. We are never going to pretend that we are some sort of prophets or spokespeople for the downtrodden, we just want to do our part in trying to make the world a better place.

Does it feel at times like an insurmountable mountain of working against oppressive or negative forces that aim to do the opposite?

Every day is a struggle against apathy and cynicism. I’m not ashamed to admit that I’ve certainly “checked out” at various points over the course of my life. It’s so difficult waking up every day and seeing all of the objectively horrible shit that goes on in the world and trying to remain even modestly positive or hopeful, but it’s what we have to do. #HopeBringers is about a revolutionary mindset that says “Things are bad, but I know that we can change them.” Apathy, nihilism – that’s a cop out. If you want to be lazy, you think the world can’t change, you think trying to help is a waste of time, that’s fine, but if you could PLEASE step the fuck aside that would be appreciated, because there’s a whole generation of young people that are determined to change the world.

What are you aiming for with the HopeBringers project?

Our aim is to use #HopeBringers as a motivator for others. We really do hope that by showcasing the amazing work that people are doing, that some of the folks that want to help but don’t know where to start will find a way to get involved with some movement or cause; whether that’s in their communities, cities, schools, states, etc. I’m excited about getting to meet some of the people that are participating and talking to them about what they think is important with the work that they are doing and asking them ways people can help out. So much of our culture is dominated by these prevailing falsehoods that say “human nature is competition” or “human nature is selfishness” and we want to show people that human nature can be community, human nature can be cooperation and mutual aid, human nature can be selflessness. Changing our culture and the current paradigm is obviously a BIG task and we aren’t going to try and say that #HopeBringers is going to single handedly bring about the radical transformation of society, but we’ve got to start somewhere.

Does seeing these engagements with your band and your music impact how you’d approach future music or shows at all?

Undeniably this will shape our music. There is so much energy and momentum from younger generations that refuse to be told that they can’t change the world and it is giving our band life. #HopeBringers is just a reaffirmation for us that the kids will save themselves. There’s power in music, and that power comes from the type of work we are seeing through this initiative.

Such an inspiring initiative! See what’s happening and get involved with the #HopeBringers hashtag on Instagram or Twitter. 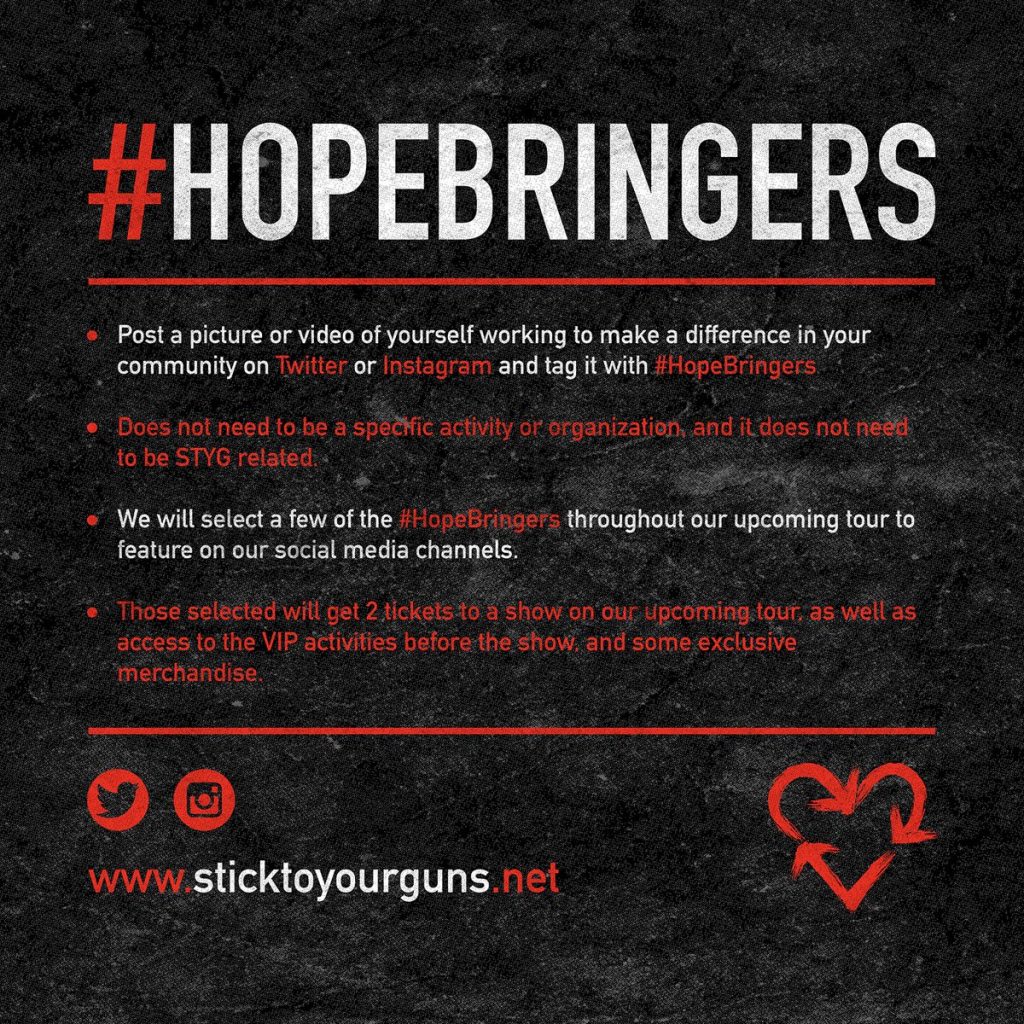 My Inspiration: Jaycob Page of Mauvais