The jellyfish have floated on by and now it’s time for a different creature to come;  “Creature Of Habit Pt. 2”, to be precise! Melbourne’s favourite high energy rockers Slowly Slowly premiered the new single yesterday, which is so far just a standalone release. But maybe…?

“Creature Of Habit Pt. 2” seems to pull away from the free-loving joy of “Jellyfish” and its easy singalong choruses to something that’s a touch more tense. Slowly Slowly’s newcomer is far more reminiscent of the energy of the songs of St. Leonards, while also coming with an unexpected nostalgic pop punk flavour. Genre influences aside, I find myself falling for the “Olly olly oxen free, not sorry” pre-chorus of the newbie, and how its burgeoning instrumental hope and yearning splash down brilliantly into a satisfying chorus.

As a fan of “The Cold War” and its “push up on me, make me guilty” bridge that builds from a place of gentle vulnerability into a gratifying climax, “Creature Of Habit Pt. 2” offers something similarly satisfying. The multilayered bridge gains energy and life, coming across like a shedding of weight and the past. A run on the drums acts like a full stop before one final chorus.

Speaking of the childhood-harkening line of “Olly olly oxen free“, it may seem like a throwaway lyric at first, but Slowly Slowly’s vocalist and frontman Ben Stewart has used it to reflect the state of the band and himself, both creatively and mentally. Ben shared that after the release of St. Leonards, he took time to reflect on his process of creating. He decided that he wanted to step out of the habit of creating through the process of mental punishment. You know, the whole tortured artist thing? In wanting something different, it inspired an improved relationship with himself. In Ben’s words: “Throughout this period I started to trust my instincts a little more and back my gut feelings.”

This shift into greater self-trust instead of leaning on external feedback (Ben had “assumed everyone else knew better”) feels like a win for the band as a collective. It’s cleverly expressed in “Creature Of Habit Pt. 2”; the literal creating of new habits for the band and signifying their handling/winning of the metaphorical game. Ben says, “I wrote it to signify us stepping into our own. The line ‘olly olly oxen free’ refers to when the game has been won/is over and it signifies to everyone to come out of hiding. This sums up where I am mentally at the moment. I’m so proud of this band, thankful for our fans, and excited about the future.”

As if to celebrate their present place of win, “Creature Of Habit Pt. 2″‘s music video (created by Michael Roberts) is a good time with Slowly Slowly doing what they do best; enjoying their music as much as we all do! Rocking out amongst fog and light beams, Ben, Alex Quayle, Patrick Murphy, and Albert Doan don’t seem to have a care in the world. Nor should they. There’s no cobwebs on Slowly Slowly!

The new single also comes in conjunction with the announcement of the Slowly Slowly Spring Tour! The tour kicks off mid November, getting the quartet in front of regional crowds keen for the Slowly Slowly experience in the flesh. Find the dates and venue details below.

Watch “Creature Of Habit Pt. 2” via YouTube below, or stream here: https://unfd.lnk.to/COHPt2 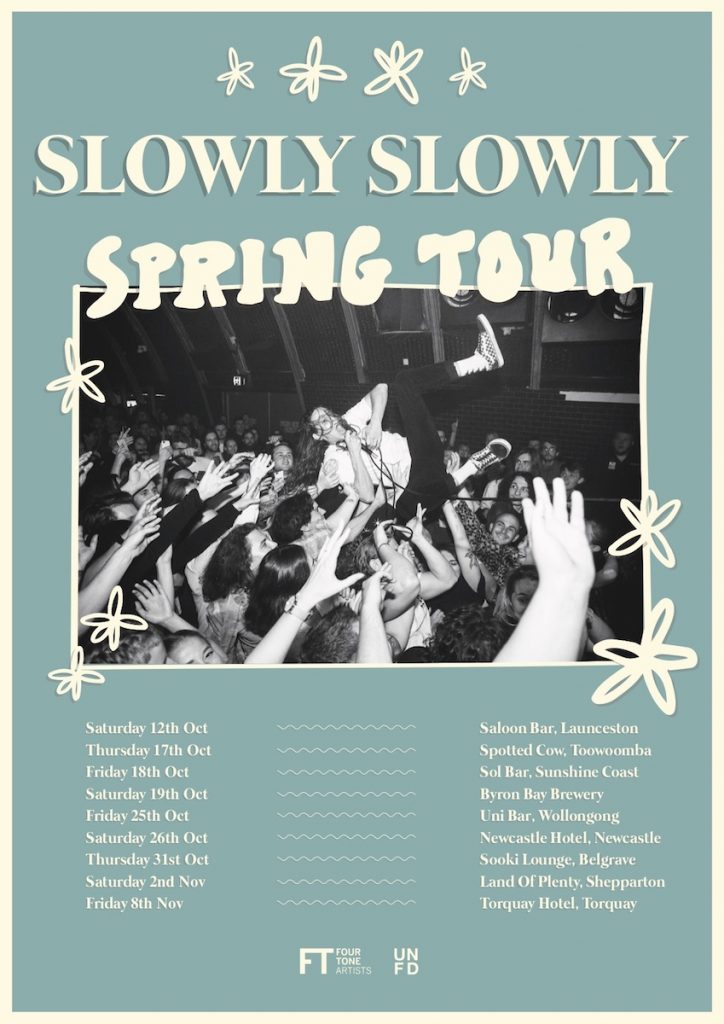