It was Semester‘s song “Attention” that very fittingly drew my attention to the band. The Brisbane based four piece brought emotional honesty to the enjoyably infectious single; the second from their Character Building EP. New to the scene, and consisting of Zac Hutchings (vocals & guitar), Gerard Settgast (guitar), James McErlain (bass), and Adrian Osman (drums), the melodic punk band already feel deserving of a place in playlists and hearts due to their humble relatability. Character Building was produced by Fletcher Matthews (Perspectives) and releases 8th June.

The title of Character Building carries weight to it before you even get to the songs themselves. Any time I have heard the phrase has seemed to be when people are reminding themselves that something bad is somehow good for them. That somewhere in the torture is something good. I therefore think of the phrase coming with a sigh of resignation while one is being dragged through mud (or coals, depending on your preference of emotional torture metaphors). Affectionately, “This is character building” is as tragi-comedic and endearing to me as the fire-surrounded meme dog saying “This is fine.” I hope that dog got out.

The album artwork features a couple who are in each others’ arms, but the hand behind the other contains a knife. The image powerfully reflects the risk or potential pain in this coupling. Along with the album title, it’s clearly relationship pain that someone is dragging themselves through and thirsting for the shiny end, and while enduring it, have the coals of heartache and rejection somehow being a positive experience for growth. 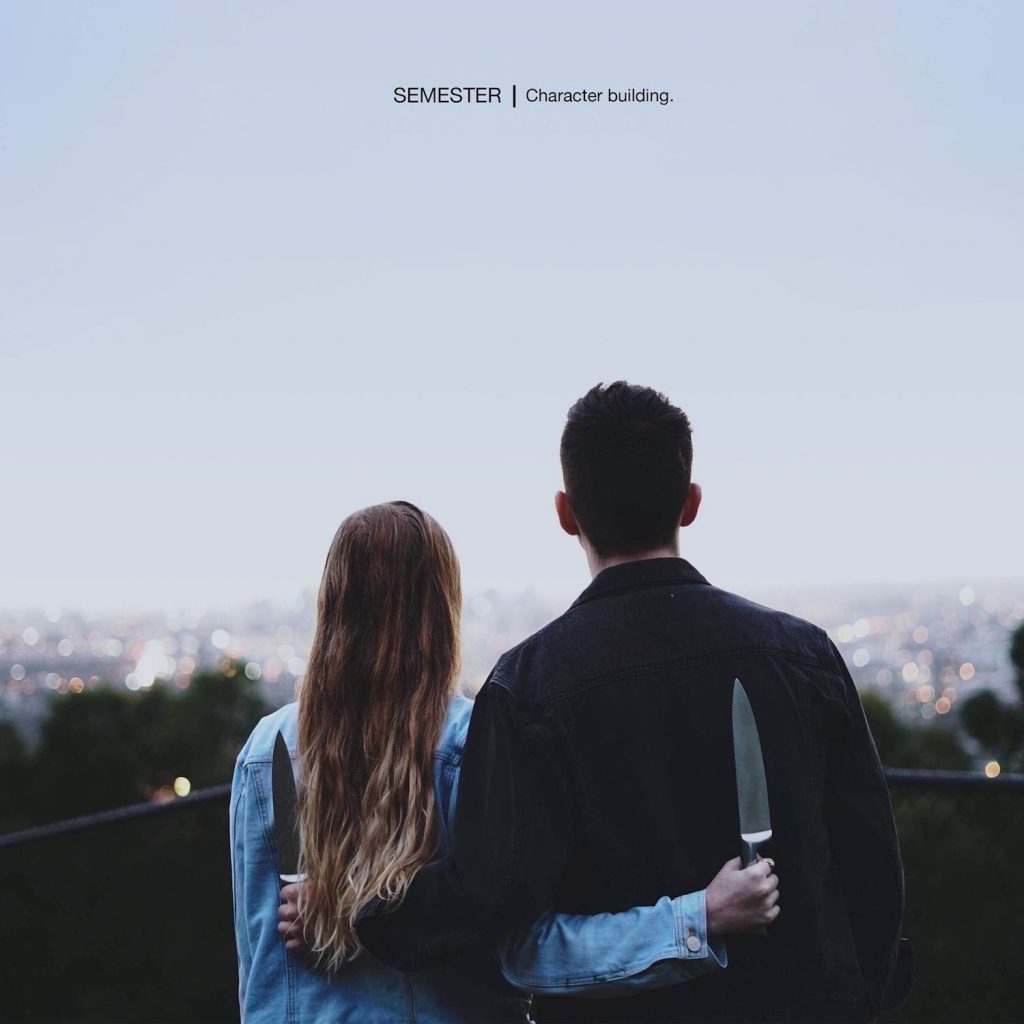 In letting the songs do the ‘speaking’, the EP’s first track “Philosophical Friends” gave me the immediate sense of a road trip; hair blowing in the wind and a moment to breathe out a whole lot of stress. It’s warm and kind of dreamy. Soon the track takes us to a vocal focus and I can feel my heart sinking along with (vocalist) Zac’s as he’s passionately cramming in syllables of a story where reality mashes with metaphor.

I found myself hanging on to the story and trying to keep up with what is being shared in the lyrical dance, recognising the vibe of things being out of place and the sense of things not melding together harmoniously. The track seems to call for an emotional untanglement, and wanting to find some kind of space or distance to understand what they were going through. As “Philosophical Friends” goes on, it feels as though it’s getting more raw and more open and the sense of loss is more apparent, leaning onto friends. I’m loving the passionate vocal-only sections with precise work via guitars and drums, and the song works well in being instrumentally unnerving and hard-hitting with what could be the end of a relationship.

“Save it all and vent to my philosophical friends”

Lone vocals and a steady riff have the following track, “Where Is Home”, feel like an intimate moment in my ears, adding vulnerability to what’s being shared. The broadening chorus serves as a collision of sounds and I find myself dropping into a feeling of unsettled questioning, like “What are we doing?”. As the song goes on, this continues and becomes broader, feeling like being uncomfortable within yourself and trying to understand how your jagged-edged self could ever fit into the circular slots that exist around you. The track is lyrically ‘unflowery’, yet seems to say so much with plainly presented metaphor about searching for something solid, some kind of meaning, and a place to belong. Where the vocals stole most of my focus, there’s some incredibly cool riffage that is accented pre-verse as well as at the end of the track. Semester musically share a sense of questioning in mental loops with circling melodies, as well as a feeling of hope in the choruses. Instrumental sections are aptly tense with the insecurity that’s presented here.

The third track “Daybreak” begins with guitar so immersive and clear, it’s like we’re in the room with it. Reverberating from the right ear, vocals and a more melodic guitar join in, as do cymbals. Split across ears, I felt like I could have been standing watching this band who are happily tugging on my heartstrings. Soon with goosebumps and solid instrumentation, it becomes apparent that the narrator is hoping that after this darkness is something lighter; that there’s actually something that exists after the hard times, something else instead of the grazes courtesy of being dragged through hellishness.

“Daybreak” seemed to be the easiest track for me to ‘get’ and I loved its song structure. The track progresses from a quieter place of questioning or confusion through to a burst of strength and determination (on all fronts), feeling incredibly satisfying in this quest of responsibility even if it hurts:

It was “Falling Short” (fourth on Character Building) where I felt very appreciative of the use of metaphors which could also not be metaphors due to their simplicity. One example is “I will keep my jacket for you dear just in case you ever come round here. I wish you were here”. It feels as though it’s far more about holding a place for someone special in your life, as opposed to keeping a literal jacket handy at all. This kind of writing carries so much weight in its simple words than meets the eye.

It was for this reason that my focus on “Falling Short” was toward the vocals and the way that the lyrics dance between poetic and real. By way of what’s being shared in this heartfelt place-holding, he’s pining for someone/something, while also knowing that what he’s experiencing isn’t what he’d hoped or dreamed for it to be.  Steady riffs, quirky accents at the chorus, dusky beats and driven rhythms have “Falling Short” feel gentle and honest even though it’s vulnerably rough when you put your heart out there.

“The darkest sky but the whitest dove,
when I’m drunk I think I’ll fall in love with you”

From the first few bars of “Character Building” I was wowed by the guitar melody and the stepping down curiosity that was being created here. It musically felt heavily like facing the facts that are happening to you and your life, even before this was revealed lyrically. Heartfelt magic courtesy of the bass added to my appreciation of this track.

There’s something intriguing about “Character Building”. The abrupt presence (and absence) of drums in amongst the gentleness feels like a reality thud of “Well, here I am alone”. I love the ‘pieceyness’ (for lack of a better word) of sound that this track has, also expressing the (lyrically-expressed) sense of picking up the pieces on his own.

Another element of “Character Building” that I appreciated was the layered vocals where one layer matter-of-fact, and the other is raw and hurting. It’s (too) calmly asserting the “This is character building” vibe; holding onto the fact that there’s some light at the end of the tunnel in the thick of ache. It’s emotionally moving in the impression of feeling broken but also having some part which is fighting to keep on going. It’s a very relatable reminder that what doesn’t kill you makes you stronger, which I guess is what Character Building is all about? Instant favourite of the EP.

“Attention” is the beautiful end to the EP. It seems to take on a feeling of being even more emotionally vulnerable than it was on its own as a single. Tucked behind some beautifully used metaphors (“You’d probably light up my dark”), in his ‘pursuit of adoration’, the protagonist has searched determinedly for someone that he can immerse himself into. He craves to have them give him the attention he craves and for them to be part of his growth and learning.

In the warm and catchy “Attention”, the ‘you’ referred to lyrically is: the unrequited love, the one he wants to be more open to him, the one he wanted to grow with, and the one that crushed his expectations and led to the creation of the song, and possibly the album.

I loved following the trail of this battered and bruised heart, while a tiny voice encouraged it to keep going. Having absorbed the EP, I’m loving the Character Building concept. These songs go into romantically vulnerable states, whether that’s being alone, having left someone, or seeking someone, and add a dash of possibility beyond that vulnerable brokenness. There’s a lot of heart that’s gone into the EP as well as the experiences that have crafted it.

Instead of my previous understanding, the firm “This is character building!” statement has softened to something more encouraging. That regardless of what we go through, there’s a ‘next’ to be found (and a next and a next..). This encouragement is unified through the EP, where even in the worst circumstances, there’s something to be gained by facing the pain and holding on to the highest of hopes. Strength can be realised in the hindsight of losing a toxic relationship, even if the loss was a painful one.

With Character Building, Semester are having us be their “philosophical friends” in lending an ear to their emotional processing, and offering presence to their “This will all turn out okay, yeah?” hopes.

Heartfelt and metaphor laden, while retaining very real and down-to-earth feel. Interesting by way of song structure and easy to enjoy these songs.

I have no major criticisms of the EP. Definitely keen to see where Semester take their music.