With the hefty opening bars of “18 Summers” still jangling around in my head, I had high hopes for Rome Hero Foxes‘ sophomore album. With the singles that the Texas based band have released, 18 Summers already hints at being heartfelt in the way that intrigued me with I/O, but also with a side of 1950s flashbacks. Picture being dumped by your girl over milkshakes at Pop’s Diner then falling into the present day to get angry about it.

Featuring CJ Burton (vocals & guitar), Andrew Hagan (vocals & keys), Michael Fox (guitar), Emilio Garcia-Caro (bass), and Adrian Romero (drums), Rome Hero Foxes have 18 Summers‘ title as homage to the band’s roots. Just after finishing high school in 2016, they were discovered by Dance Gavin Dance‘s Kurt Travis and brought For When You’re Falling Backwards to life. With the ensuing journey of sound through the debut album, I/O and Horoscope, Rome Hero Foxes suggest they’re returned to simpler territory and shining a light on surf rock and indie pop influences. Speculation aside, I wanted to find out for myself by immersing in the album track-by-track.

“Lost In A Room” is the album opener and its bright introduction (and synchronised swimmers) quickly sets a breezy and free vibe. CJ Burton’s sweet crooning along with intertwined melodies adds an element of relationship angst to this otherwise dreamy and sunshiney mood. The music video compliments the track perfectly, where a drum-thudding drop into vocal frustration, more complex guitar, and a well-timed beach ball kick aptly expressing the heart-sinking sufferance of unrequited love. A fragrant air of do-wop blowing through burgeoning relationship angst is as fascinating as you’d expect.

“Chelsea are you there?”

“Break Your Own Bones” is melodic and surf-y without a doubt. Circular riffs, contemplative chimes, and an aching request to be forgiven and loved flood out from this second track. These heartfelt callouts are what we already know and love of Rome Hero Foxes, but are just sonically painted in brighter colours, much like the album cover. Steady beats, what sounds like organ tones, dreamy riffs, and confrontational lyrics are par for the course throughout. A shift and instrumental focus around the 3:20 mark feels conversational; a last explanation of what was felt, what they went through, and how it’s better that it’s over and everyone got out alive.

There’s something so brilliantly cheesy about the third track of the album “Chest Piece”. And I’m in love with that cheese factor, the track’s explosive shift, and the fact a song called “Chest Piece” could be created in a way that sounds so retro, initially at least. Watching the music video’s ballerina rotate on the turntable while a heartbreak tune (that would be completely at home on the Grease soundtrack) plays is a slice of something pretty and polished, disappointed but adult, mature and calm. But then oh-so-satisfyingly, the fog of heartache dissipates, leaving fury in its wake, expressed by fuzzy guitar and a lengthy and genuinely worded vent with barely a pause for breath:

“But I’d be lying if I said I didn’t hate you for the shitty half-assed reasons that you waited for the moment you found ‘Plan B’. So don’t tell me we were toxic when you’re oh so fuckin’ childish with the way we disagreed on certain things that never mattered much to me.”

Paired with an upbeat sound, the abuser of the heart in question is torn a new one lyrically, as unaffected self-assured riffs and grooves forge onward. This call-out on mistreatment and game-playing offers a last-word mic-drop satisfaction, with bass grooves observing this all unfold. Impressively setting up to finality of this pairing (with “This will be the last you hear of me” echoing out into the ether), the growing frustration with people in general blasts out without filter: “I WILL NEVER TRUST A GOD DAMN PERSON”. I’ll be honest to say I would happily have reviewed a double album chock full of this flavour of song, cheese and all.

“18 Summers” keeps things moving forward. Intro-less we’re dropped into the thick of things with a lyrical stream that’s as much confessional as it is a capture of time passing. Love rises out of the murky turmoil of tragedy, with promise and shine. The free-falling and open choruses are a world away from outward judgements and promise something more hopeful and greater – until the self-judgements creep into the picture.

A delicately enunciated (and dare I say Beatles-esque) moment looks at layers of evidence for changing. Weighty beats and bouncing bass along with this craft something both playful and pressuresome. It’s for this reason that the 1:41 run for freedom is so very satisfying:

We’re then back in freedom lane with fluttering heart of possibility instead of thinking too much. “18 Summers” has the feel of saying so much more than it seems and I love the feel of it seeming to come full circle as the organ rings out in closing.

The more thoughtful vibing “Be Your Side” transported me back to reviewing I/O and the beautiful heart pangs that Rome Hero Foxes seemed to be able to draw from me with their sound. To me the essence of this band is this beautiful outpouring of experiences centred around the heart, whether they’re damaging or warming. Flooded in vocal layers/harmonies and easy riffs, “Be Your Side” takes us into the intimate world of two who are trying to traverse love and hoping for something better.

With “Don’t Call My Name” I’m not entirely sure what world we’ve stepped into, with angular private eye TV theme riffs that direct the listener inward. As this determined seriousness settles, a searching sound is crafted by guitar and bass, and we hear about the ‘shitty lies’ in this haunted state and a shedding of the deadweight of this former love.

“Rest in peace to your reputation.”

Going beyond the crying-in-bed hurt feelings state we’ve previously heard, Rome Hero Foxes are sharing a emboldened ‘you’re dead to me’ vibe and aren’t shy about this quest for finality, and to have the other feel how they once did. An emphatic soaring guitar at the bridge with “Don’t call my name” repeated is the door closing and the last nail on the coffin, due to the psychological damage they’ve seemed to endure. I didn’t ‘get’ the opening riff, but after several listens it’s shifted from jarring to galvanising for this rising up against one they’ve previously been victim to.

“San Junipero” is a wow track of 18 Summers for me. Going by the title and the lyrics, the track is a musical interpretation of the Black Mirror episode of the same name. The memorable ‘San Junipero’ centred around a simulated world where people can visit and also move to permanently upon death. The episode focused on the relationship between Yorkie and Kelly, from their momentous meeting in a 1987 version of the simulation, and the intertwining of the two hearts and where this leads them. The track is a genuinely impressive capture of the heart and energy of the episode, so much so that I almost want to re-watch it to see if they’ve thieved a riff from the soundtrack: It’s that well-fitting! 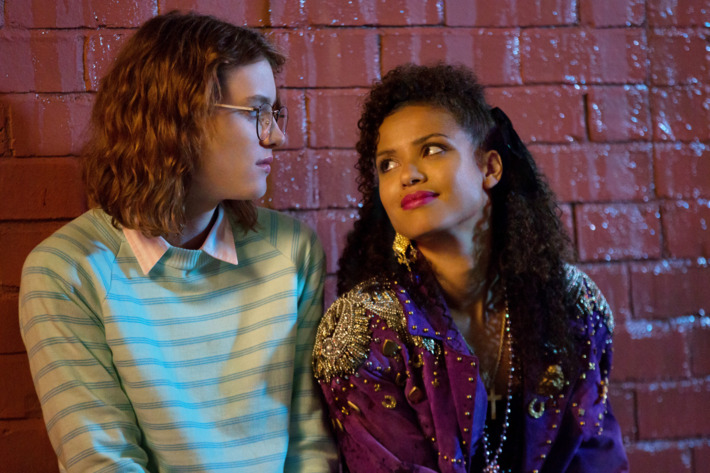 “Her love is pure, unlike any other I’ve had before
And we can stay married, we can stay young
Or spend an eternity in what comes after”

Hopeless romantics will adore this soaking in static electric retro love across a dance floor and the subsequent tumultuous working out of ‘where to from here?’ expressed so beautifully by Rome Hero Foxes. I love the song as much as I loved the episode; musically expressing the magnetism of the duo despite obstacles, and the golden thread of love prevailing over time and space. Simply beautiful.

By the eighth track “Don’t Close The Door”, I’m honestly finding the beachy melodic guitars and skipping pace a little wearing. I was more interested to lose myself in the lyrical story, but it seemed to be drowning underneath the guitars and distortion for a lot of the track. Through waves of synth, layers of guitar, and shaking of tambourine, there’s a heartfelt attempt to get through to someone – which actually makes the smothering of vocals make perfect sense! I definitely felt the frustration of distance along with the song. Frustration aside, an instrumental-centred section at the bridge was beautifully done, where the guitar spoke clearly in pleading tones.

Thankfully the vocals come up for air in “Seattle Queen”. Second last on the album, the track immediately feels jumbled, messy, and tumbling, as well as a little bit ethereal – but all in an intriguing and melodic way. Just like the previous track, there’s a lot going on, but my focus is easily pulled to the measured and carefully shared storytelling lyrics, as weighty waves of guitar surround the two who seem to be navigating a long-distance relationship. I’m reminded of other songs by Rome Hero Foxes where they talk about the same challenges of loving someone from far away. There’s something beautifully endearing about this track, where all the cards are laid out on the table in the name of gaining trust.

“Oh for God’s sake girl, can’t you see I loved you”

“Good For You” takes a futuristic bend on the surf rock vibe, with eerie effects melding in with static riffs and distant vocals. The repeated/looping melody with effects is hypnotising, and coupled with the raw and real lyricism it has a ‘stuck in my head’ feel to it all. Yet again confessional and laying everything out earnestly, it works vulnerably and authentically, even though there’s a sparkle to it all. Closing with contemplative tones and ocean waves, it is as though another summer comes to an end.

These ten tracks have been really enjoyable to explore! I feel that even though I’m seeing similar emotional weight and honesty that was present in previous Rome Hero Foxes releases, it’s shared on 18 Summers with a sense of colour and playfulness. It’s is a blend that works really well for Rome Hero Foxes’ sound, and they feel at home here; still able to vent the heartaches, while also spraypainting it in neon. Sharing some distinctly 1950s and 1980s sounds, Rome Hero Foxes are pretty much taking inspiration and running with it, and seeming at home whether it’s Grease-tastic diner heartbreak, 80s arcade love at first site, or burn-it-all-down rock. Love is the uniting factor across the ages and sounds, and Rome Hero Foxes do love very well.

By way of specific tracks, “San Junipero” was a really pleasant surprise that will stick with me, as will “Chest Piece” and “Break Your Own Bones”. I can see a number of these songs getting easily stuck in heads.

Genuine and vulnerable sharing of the tortures of love. The variety of the album is a great example of the band's versatility and capabilities. Fuzzy riffs are great riffs. Very moreish songs.

The upbeat and beachy vibe got to be too much at times and detracted from some of the realness for me.