Anyone that’s a fan of Hellions‘ music will have sung along with the words of Matt Gravolin. I’d interviewed Matt last year, when he was positioned as guitarist and lyricist for the inspirational and connection-oriented quartet, and he had shared his habit of constantly writing. He said “I’m writing words all the time. In general, almost too much. I can’t really have a thought without writing it down. I always have this big collection of words in my phone or in my journal or whatever and it always seems like an endless stream.”

With our support and the start of Depth Publishing, Matt has taken that endless stream of writing (or at least some of it) and turned it into a tactile experience: Permanent Swim, a physical collection of poetry and prose in book form.

I first read Permanent Swim on my phone in a car park after a Little Brother gig at Cherry Bar in late 2018. Matt had sent it through after I’d shared with him my dreams of Depth eventually publishing literature created by musicians. Intending to just have a brief look before beginning my drive home, I was already hooked, enjoying the delicious verbosity and ‘music’ of the syllables as I read them in my head. I was moved too, deciding that the pieces were best read slowly and attentively; just like the gradual unfolding of Hellions’ songs. The idea of a book continued to brew for some time, before gradually moving forward, with each piece sliding into place and Permanent Swim soon taking on a life and strong pace of its own.

When it comes to the wearing of hats as ‘poet’ or ‘lyricist’, they are one and the same for Matt. He says “I’ve been writing pieces like this for about as long as I’ve been a songwriter, I suppose.”  Hellions lyrics begin in poetry form and, as something of a perfectionist, Matt applies the same process to his words as he does to those lyrics: “The writing will be torn apart over and over until the message is apparent and articulated properly.”  Compared to writing for lyrics, Matt is obviously not needing to edit for vocal melody or rhythm when he’s composing poetry, which he feels allows for more fluidity and freedom.

Writing for Matt is a means of understanding. He chronicles his life experiences as a means of processing. In his words: “My thought process is often too rapid for me to ascertain how I really feel about the world around me beyond an intuitive hue. I’m easily disoriented and writing helps me to quieten everything and make sense of the way I feel.” 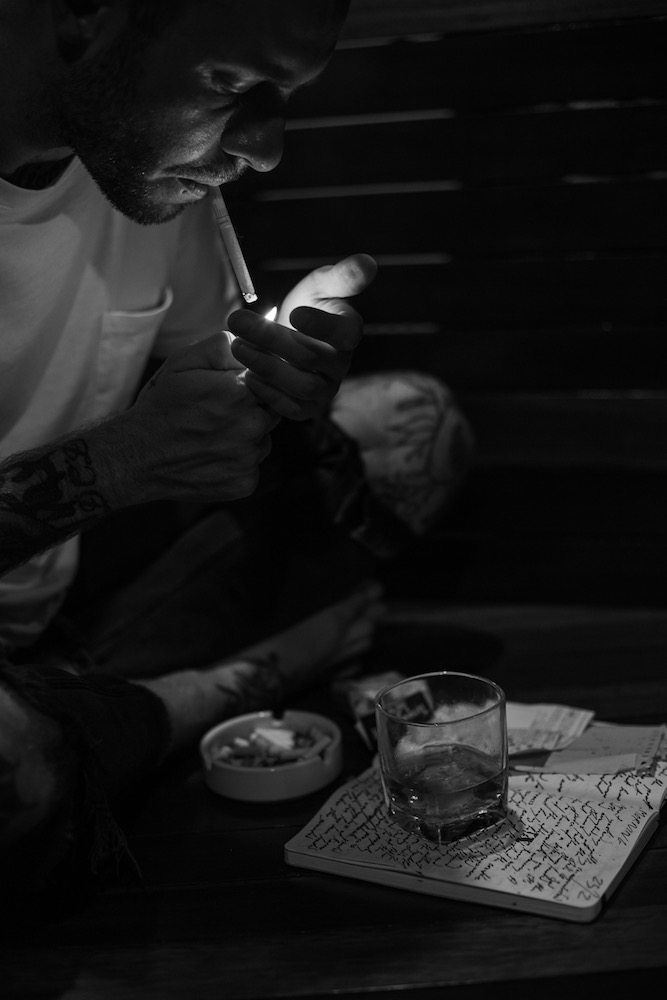 Followers of Matt on Instagram will see books and quotes from authors and poets appear on his stories at times. It’s abundantly clear that he’s as much an avid reader as he is a writer. When it comes to curators of the written word that he admires, he has several favourites: “The translated novels of German author Hermann Hesse have been enduring favourites. He clearly elucidates the fever dream we call the human experience. Bukowski’s poetry is brilliant. It is unabashedly honest and completely non-linear. Lately I’ve been reading Anaïs Nin and Chuck Palahniuk.”

Musicians I’ve spoken with have described how Matt is constantly found with his head buried in books while on tour. For Matt, books offer a means of connection that he finds exciting. It’s the feeling of being understood that excites him most as a reader. Elaborating, he says “When a writer properly articulates the way that something joyous or harrowing really feels, it is life-affirming in its resonance. There’s no other feeling like that.”

This understanding has unquestionably occurred for many who’ve found a sense of belonging in Hellions’ lyrics. Somewhere within the band’s discography is an anthem for each mood of questioning or concern, making for the establishment of life-long fans. It’s the appreciation from fans that has encouraged Matt forward with his writing. He says “People have always been very kind about the Hellions lyrics and it’s given me the confidence to share something a little more raw and comparatively unprocessed. There’s enough hurt to gratify the readers’ inner voyeur and enough saccharinity to keep you from feeling uneasy about it.”

The title of Permanent Swim conjures up many immediate thoughts, but for Matt it relates specifically to the role of words in his life more than any struggle to keep his head above water. “The title is a comment on the writing process. As I had mentioned, I tolerate something of a stuttering cognition and often feel sustained rushes of disorientation. I habitually think in terms of writing, in phrases and verses, as a means to combat the disorientation and analyse my thoughts. This is happening all of the time and if I’m not in company, then I am writing it down. ‘Permanent Swim’ seemed the best way for me to articulate what that feels like and it’s particularly representative of the time in which most of the pieces were conceived, between the end of the Opera Oblivia sessions and the end of the Rue sessions.”

Inside Permanent Swim, the poems are shared in seven sections. In order: Masochist, Thespian, Jester, Vagabond, Hedonist, Pessimist, Child. Matt uses these archetypes to present different phases or aspects of himself, and this choice came about during the process of collecting the pieces of writing together. “I had many of those poems lying about, so I tried to categorise them in order to get a feel for the project. Seven categories presented themselves in the end, each named to suit the mode of thought that the pieces came out of. I feel as though Masochist, Thespian, Vagabond, Hedonist, Pessimist and Child are self-explanatory chapter titles. The Jester chapter is based mostly on the perspective that comes with career musicianship.” The order of pieces is not chronological, but they do form an overarching narrative structure and present a journey – Matt’s own journey of life.

And the poems of Permanent Swim? They are as personal as we’ve experienced in the Hellions world. Over the space of 63 pieces of poetry, Matt shares organic realisations and evolutions with his observations and experiences. Sometimes it feels bleak and impossible, and other times feels defiantly strong. The idea of the power of words shared in honesty is something that means a lot to Matt. He seeks the visceral more than the cerebral, hoping for this choice to result in a lasting effect. He wants to bring people on the journey with him and marvels at that possibility. “If you’ve done a good job of documenting a revelatory experience then a piece of writing can become a catalyst for all sorts of change in another person’s perspective or even their conscious experience at large, isn’t that an incredible thing to consider?” 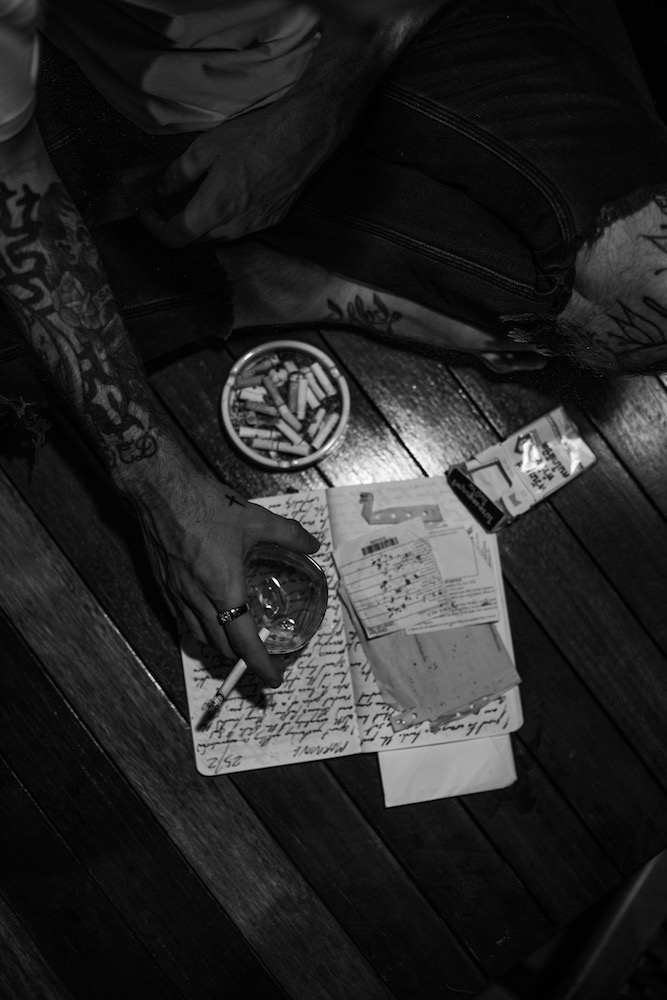 Matt feels that Permanent Swim the most honest he has been in a project that’s currently available to the public. He says “It’s personal in a very specific way. It feels like an exorcism for the most part and a baptism sometimes.” He considers “The Simian Choir”, “Little Lights”, or “The Virtues of Companionship” to be his favourite pieces of the book for now, and understandably couldn’t pin down a favourite line. There’s much to take in! I personally adore the “Pamela” poems, and many others, and the feelings that all of the pieces collectively inspire; introspection, frustration, unfiltered imperfection, and the door left wide open for hope to arrive at any minute.

When I asked Matt how he hoped that Permanent Swim would be received, he said “Well, I hope that it serves to remind the reader that when it comes down to it, the human experience doesn’t differ all that much from person to person. Whether you interpret that to be a positive or negative thing matters less than the fact that remains either way – we are not alone.”

For budding poets or other writers who are keen to similarly ooze from brain and heart to page in the same way as Matt? He whittles it down to immersing in words and being open. In his words: “Being honest is the way to create something unique. Read as much as you can and write all the time.”

We are very proud to have shared Permanent Swim with the world side-by-side with Matt, and we hope you enjoy the experience of taking time with each of the pieces, each of the archetypes, and every nuance of mood and thought.