2020 has been an extremely devastating year for all of us, but many who’ve been hit the hardest during this pandemic are those affiliated with the music industry. With festivals being cancelled and venue doors remaining shut, it can be difficult at times to remain positive and optimistic for what lies ahead. But with every dark cloud comes a silver lining, and while the days drag on there have been those who’ve taken an opportunistic approach and hit the drawing board to take advantage of time spent indoors. The Dangerous Summer’s emo veteran Matt Kennedy is one of those people.

Matt grew up in Springfield, Illinois. With a strong passion for music, he is no stranger to the industry. Since the age of 14, he’s been writing music. In 2005 at the age of 20, he and a few of his long-time friends formed the emo-rock band The Graduate. Within just nine months they were signed onto Icon MES Records and later to Razor & Tie. The national success of The Graduate saw him play Lollapalooza, Warped Tour, and Germany’s Rock am See.  After the band’s unfortunate break up in 2011, he spent some years as a cue composer for MTV, Animal Planet, and the Discovery Channel; specialising in custom instrumental songs for various reality TV shows. Then in 2012, Matt partnered up with AJ Perdomo for the re-formation of one of the most underrated bands of the last decade, The Dangerous Summer.

Recently the band finished their contract with Hopeless Records, and founding member AJ Perdomo announced they’d be releasing their upcoming EP All That Is Left Under The Blue Sky under his independent label, Molly Water Music. Born from the mania AJ experienced while dealing with all the labels wanting to sign them, Molly Water Music’s goal is to create a safe place for musicians to go for answers. A place where the industry can’t touch.

There are currently a few projects signed to Molly Water Music and one of those is Matt Kennedy’s first solo artistic endeavour, Little Kennedy. Here we find Matt creatively writing and recording his own instrumentals and featuring a compilation of different vocalists for each of his tracks. Upon hearing news of this and his debut single, “Sawdust (On Everything)” featuring Joe Zorzi from Modern Chemistry, I just had to catch up with him to find out more.

So how did Little Kennedy get started?

It’s a very recent project that came to fruition during quarantine. I’d been making all of these instrumental songs to keep busy between writing sessions with The Dangerous Summer, but I didn’t feel that my voice was the right fit. Each song varies in genre, so I started seeking out singers that I thought would be the best match for each vibe.

This debut single “Sawdust (On Everything)” is an extremely alluring track, and the vocals from Joe Zorzi of Modern Chemistry compliment its tone remarkably. Did this happen fortuitously, or did you know exactly who you wanted to feature on your tracks prior to composing them?

I wrote and recorded the instrumentals and felt it was a perfect fit for Joe. We’re good friends so I hit him up to see what he thought. He sent the song back with these beautiful melodies and lyrics. It took on a whole new life with his voice, and gave it this dreamlike haze. I’m very proud of how it turned out. I knew that Joe was the perfect fit, it was just a matter of getting him on board [laughs]. Luckily, he was into the song and his voice compliments it so well. I’ve always been a fan of his voice. I have a few more songs I’m working on currently, and some people in mind for each one.

I loved the music video. It has an ethereal vibe which suits the song. Did COVID have much impact on its creation?

Not necessarily, other than the fact that the director lives in Brooklyn, NY.  So with the current restrictions, it made it difficult to actually be in the video. It was directed by my friend Benjamin Lieber, a very talented videographer and ascetic designer. He’s amazing at capturing the feeling of each project he works on.

I love how simplistic, yet ambiguous Joe’s lyrics are, what’s the song mean to you?

I can’t speak for Joe, but for me personally it’s a connection to being stuck inside your house or an unwanted relationship. The sawdust is a reminder of what you’re going through, and you’re maybe too depressed or unmotivated to clean it up. Being a musician during COVID has been a difficult thing to grasp. We’re unable to tour or do our job, and I know it’s been impacting the mental health of a lot of my friends. I have good days and bad days as well but writing with AJ [The Dangerous Summer] and working on Little Kennedy songs has been giving me purpose and happiness.

If there was any artist you could collaborate with on Little Kennedy, who would it be? I’d love to see someone like Phoebe Bridgers jump on board.

That’s a massive compliment, thank you. Phoebe Bridgers is actually one of my favourite artists right now. She writes the most beautiful music and isn’t afraid to be herself. I’d also love to write a song with Joey of From Indian Lakes. He’s a killer songwriter and his voice has an air like quality to it. I think it would turn out really well. 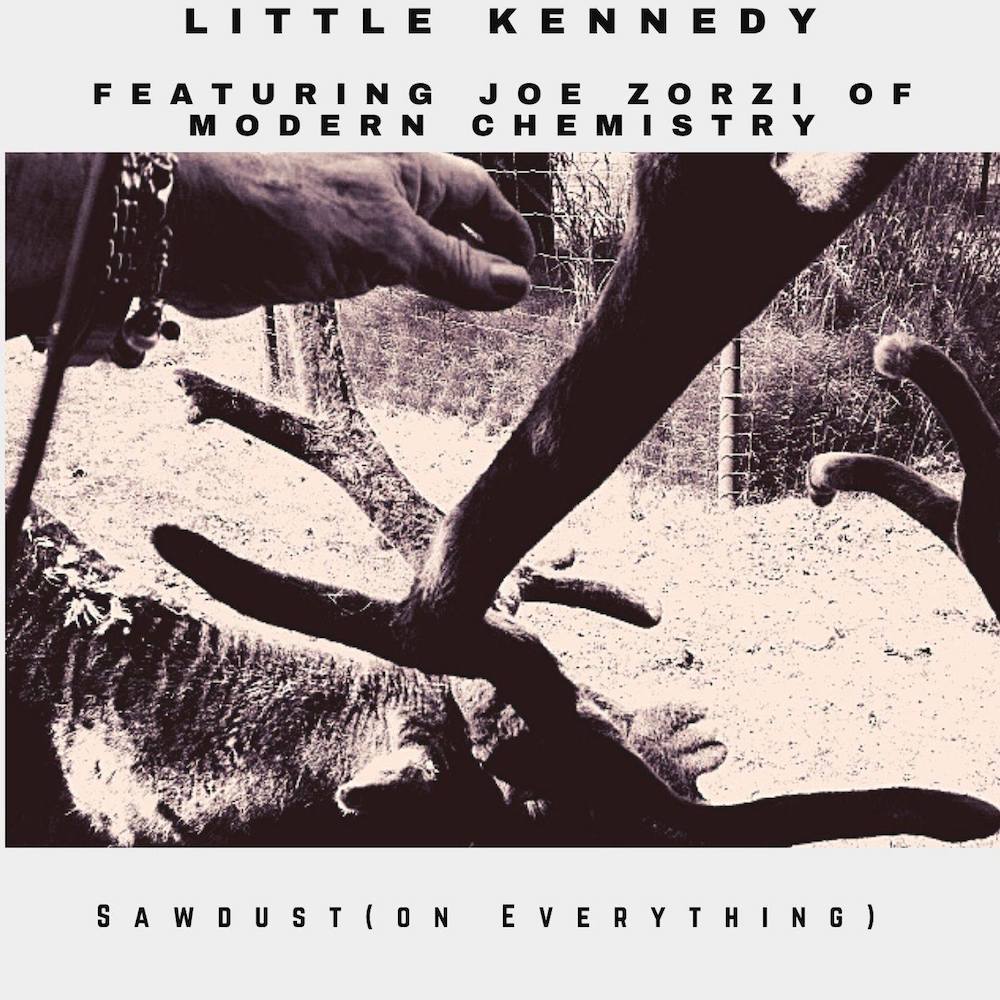 What’s the significance and inspiration for the album artwork

It’s a picture I took while in Anchorage, Alaska, while visiting a wildlife refuge. This older woman reached her hand into the frame while I was taking a picture of an elk. I think she was trying to pet the antlers because they had fur on them [laughs]. I just really love that shot and I thought it fit the vibe of the song. We’re all trying to make these connections in life with others, and it captured that innocent feeling of trying to bond with another living thing.

It would be empowering to have so much creative freedom with Little Kennedy. To be able to write, record and mix all the instrumentals yourself, I imagine it’s just as important for you to give the vocalist that same creative freedom.

For sure, I think it’s really important to not mess with their process. I’m only hitting up singers who I respect on multiple levels, not just for their song-writing and vocal style. With the first single I didn’t change anything Joe wrote, which was great. I could focus on getting a good mix and not be distracted by moving vocals around or replacing anything.

How do you feel about your creative process now? What are the benefits and challenges you’ve experienced?

Since I was a kid and first learned how to record myself, I’ve constantly been writing on my own. Little Kennedy is a reflection of that; of all my past influences over the years. Working on music alone in a studio is kind of a beautifully lonely process. You can dive deep into a song without someone else’s input, and for better or worse it captures how you were feeling that day. Each one is like a little time capsule. I think the search for which singer fits each song is really exciting too. I plan on doing the whole album this way and making videos for each track.

The benefit is that we have the final say from inception to delivery of a song. We source out our most talented friends in videography, graphic design, and marketing to help with the vision of each release. The big challenge is that we have to fund everything ourselves, with the risk of losing money that could have gone to rent, bills, or food for our families. We believe enough in our projects that we’re willing to take that risk.

So, how has releasing music independently through AJ’s label Molly Water Music compared to your previous experiences of working with major labels?

Molly Water Music is mostly a collective; people we’ve worked with over the years. I handle all merch distribution for the label via my warehouse here in Denver, Colorado. Since we’re both so hands-on with growing the label and our individual projects, it’s the only possible scenario for us right now. We finally have charge over our new masters, merch rights, and online sales. If someone logs on to the website and buys an album, t-shirt, or anything, the money goes directly to help fund our projects. The people at Hopeless were great to us for years, but the amount of money and rights you give up by working with a label is disproportionate to the amount of love and work you put into the music. 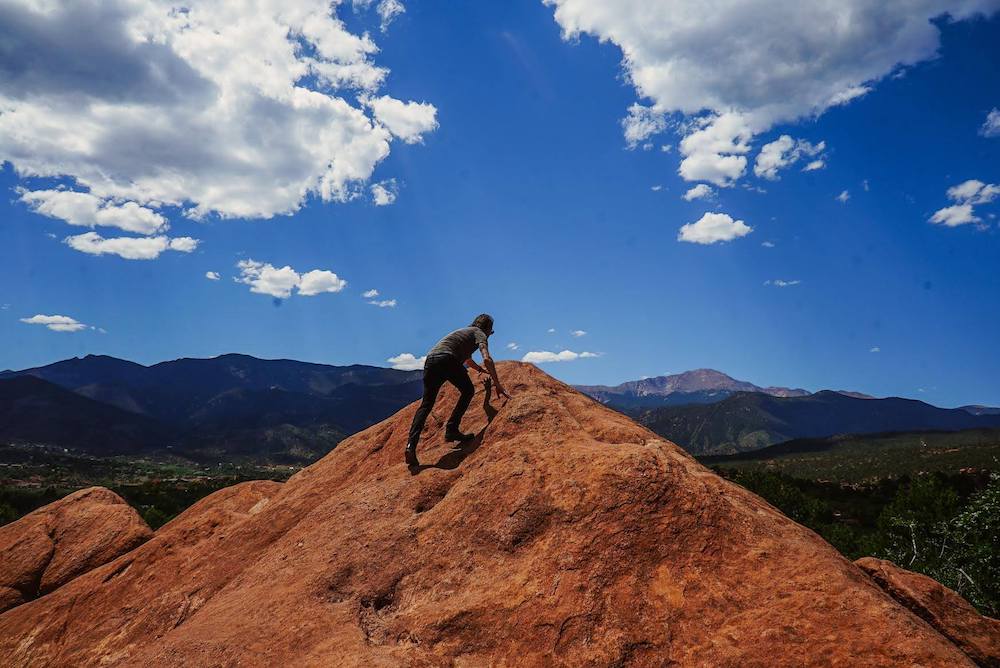 When I was younger, the Midwest was a source of so much inspirational music for me. It still is. Growing up there clearly had a huge impact on you too. You’ve lived in Illinois, LA, Nashville, and recently made the move to Denver. Other than these places, what else influences you when creating your art?

Yeah, growing up in the Midwest had a massive impact on my music career. When I was playing shows as a kid, it was with local bands like American Football, Park, The Junior Varsity, June, and The Forecast. There wasn’t really a pop punk scene there in the early 2000s, mostly an indie scene with a focus on pretty guitar parts, with multiple leads going on at the same time. I feel like that’s why I play guitar like I do.

Living in LA was equally fun and stressful at the same time. Rent is crazy high, but I was able to get a job with Vanacore Music as a composer for television. I mostly wrote instrumental songs for reality TV shows, which helped me get better with writing, production, and mixing. Nashville was a great experience and I planned on living there forever really, but when I met my now fiancé Tiana, I knew I had to be closer to her. Luckily touring slowed down at the same time we planned to move in together, so we’ve spent a lot of time together over the last 6 months.

It’s been really great catching up with you man, thank you. We’re all really looking forward to hearing more of your work. What else is on the horizon for Little Kennedy?

More music and videos on the way. I plan on releasing singles every few months for the next year, and I’ll eventually release the full-length album on vinyl. Thanks for these great questions, I can’t wait until we can make it back to Australia. We love your country and it’s such a good time touring there.

Be sure to head to Molly Water Music for all merch and sales. “ Sawdust (On Everything)” featuring Joe Zorzi from Modern Chemistry is streaming everywhere now, check it out.

Writer and deep thinker at Depth Mag. If you can’t handle me at my Carly Rae Jepsen then you don’t deserve me at my Siberian Hell Sounds.