We fell deeply for Lilac Lungs when we heard their track “Next To Nothing”, listening to it for weeks on end. Their alternative rock sound, powerful lyrics and beautiful vocals took us on a trip that we didn’t want to come back from.

Releasing on 12th May is their first full-length album, Eventide, which had “Next To Nothing” from the album set fire to our curiosities, as well as having their dedicated fans waiting with bated breath. We are so grateful to get to hear Eventide prior to release, to immerse in its ten tracks.

The title Eventide represents something special to Lilac Lungs. It describes the evening and being lost in a never ending sunset, as a safe place for thoughts of the night that we may get wrapped up in. The album artwork represents this never ending sunset, reflecting the variety of emotions captured on the album, and the album itself becoming a safe place for the emotions of Lilac Lungs fans. 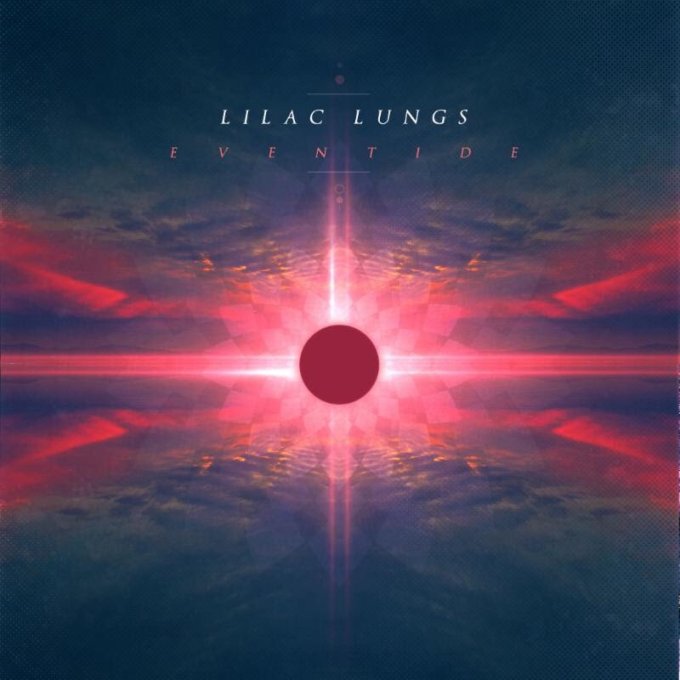 The first track on Eventide is “Welcome To The Fallout”. It opens with reverberations, as we find ourselves in this never ending sunset. Gradually we are pulled through an ominous fog of sound into a space of more clarity, a hectic pace and heavy drum beats. Emily’s vocals feel scene-setting as well as accepting.

“Who we were before the biohazard has been shattered”

The pushing bass feels like we are fast-moving and going through something challenging. Similar to our experience with “Next To Nothing”, Emily’s vocals are so tender, they seem to get deep inside you without you realising it. The track is warm and flowing, inviting us to find people just like us. “Welcome To The Fallout” is a comforting track reminding us each that we are not alone in moving through the big perspective-shattering moments in life, and that we will still be okay within ourselves even though we’ve changed from who we were before it happened.

Ahh “Next To Nothing”. We know and love this second track, which ruthlessly inspires tears, ripping at all of our feels. There is a feeling like a tug of war between fighting or giving up, expressed in the lyrics as well as by the zorbing pulse, deep bass, and sections of flow and then more stiltedness. The track brings a gentle alt rock sound, with moments of ‘singing’ guitar and a focus on drums instead of the more electronified beats.

“Bring me deeper than before,
Wash the blood off of my sword”

The song’s pulses feel like encouragement onward through difficulty, and Emily’s vocals give the feeling that she’s both standing up to fight as well as breaking apart. Perhaps both at the same time, drowning her in all that she is, with there remaining a glimmer for some kind of reprieve.

“Uh Oh” could not be more different than “Next To Nothing”. This third track turns the pop factor up full blast. The song feels fun and sweet, yet speaks about the challenge of growing up in a home of tension and not feeling at ease.

It’s heart wrenching in that it could easily be a child wishing their world was very different to how it is. Asking “Where do we fit? This can’t be how things were supposed to go”. The playful pop beat of the track expresses an innocence, while all the while a searching rock feel, courtesy of guitar, flows through the track. A tribal-sounding chant could also hark back to primal roots, where belonging matters for our survival. Aside from affirming that the cycle won’t be continued, there’s no clear resolution to these thoughts and emotions of belongingness. But the connection that the song inspires, with someone else feeling like they’re not in the right home or family, is something importantly relatable to someone not feeling ‘at home’.

“Fallen For Your Face” is breathtaking. The purity and clarity of Emily’s voice is piercing yet gentle, and without realising, you find this vocal lilac cloud getting under your skin. The track carries a warm and questioning feeling, describing tentative love and a wondering who they are.

“Moving close
I want you here
Who would I be if I hadn’t fallen for your face?”

There’s a retro beat, and sweet sweet synth along with alt rock guitar and drums. This combination of ‘real’ and polished, a feeling of to-ing and fro-ing, as well as Emily singing solo and then in harmony with John feels like a dance of openness or staying behind a mask.

“Us Vs Ourselves” is the next track and feels otherworldly. We fall into a reality with edited vocals, pulsing synth and spaciousness commanded by Emily’s vocals that feel heavy with defeat.

“Rough on the edges
That’s how I like it”

“Us Vs Ourselves” describes an inner battle that rages within, as the title shares. After loud pulsed beats, there is a quietening down, a falling away of defenses if you like, leaving just Emily and a piano: “And I’ll challenge my fear and ask you to remember me.” The wow factor of this moment is insane. Before you can let that sink in, we’re hit hard with wall of sound. There is a fight vibe, but of growing stronger in the face of this challenge. The track ends with bone-shaking beats.

We fall into a gentler sound again with the next track. “Guard Dog” describes being in the grips of anxiety, and seeking out the support from a metaphorical guardian.

“Tail between my legs,
I’m shrinking with every stride.
Have I become the monster that tears at my insides?
Rips at every edge,
I’ve been swallowed whole,
But my guard dog will carry my broken soul”

The dance beat and hand-clapping vibe is far more upbeat than you would expect in a track about anxiety, but it’s about honesty of the experience, and a seeking of help. The bass is incredible on this track, teasing at Nirvana’s “Lithium” in a moment where it calls more of the focus. Having both John and Emily singing “Maybe things are working out in our favour” is inspired hopefulness, and this track really becomes an anthem of ‘don’t worry, you’ll get through this’. I would expect goosebumps on this one when played live.

I am noticing a theme of encouragement through these tracks, but not blatantly or falsely positive. Humans have these experiences and emotions and they are acknowledged in the lyrics and supported by tracks that are lifting and inspiring. “Fine” is another of those tracks; another ‘hang in there’ anthem and gift of support for listeners. It’s very dancey by way of electro beats, as well as having guitar singing along from the second verse.

The next track, “Circle” gave me massive goosebumps. It’s a vulnerable conversation with the self, realising that they are stuck in the same loop of thought and inner struggle.

The lyrics poke deep to the heart, with both confession (“I’ve gotta keep sane”) and encouragement (“Peace will come in time”). While this is a lighter track, the breathtaking vocals morph from fragile to powerful, and feel supported by backing, impressive guitar work and battling drums.

With “All I Have”, I felt adrift in a cloudy, spacious dreamscape. Emily’s beautiful vocals echo throughout and make their way through your entire being (if you let them). The imagery is divine, speaking about moonlight wrapping her up and stars singing us to sleep. The synth melody and John’s vocals set off further ripples of goosebumps.

“This feels like a dream I want to be real”

The track speaks about all they have, in this moment, by just being in it, as it drifts on into a more pulsing beat adding to the ambience. It’s just beautiful, with a sweet guitar and distantly echoed harmonies closing the track.

“Young Warrior” is the last track on Eventide. This track has such a journey energy, searching with a horizon hitting pulsing beat and with electro-distorted vocalisations.

Synth and piano joins in on the battlecry and statement of strength. The ‘young warrior’ chanting and war drums build up into an impressive feeling of being strong and unable to be defeated. The song expresses the end of fighting. Of being better than this, and able to overcome it all. It’s a powerful close to an amazing album!

Eventide is something special. The tracks collectively take on an otherworldly feel where the members of Lilac Lungs accompany their listeners on a soulful journey through emotional realities of life. The lightness and hopefulness of the tracks feel like we’re buoyant through our fears and also inspired to see ourselves as capable of overcoming these ‘creatures’ that grip at our chest and make it hard to breathe. We’re inspired to float in dreamscapes that are waiting just outside our awareness, and embrace our innate strength as young warriors.

Eventide is a beautiful gift, from Lilac Lungs’ heart to their listeners, rich with encouragement and inspiration.

Twenty One Pilots - Ruby (Track Of The Day, 8th April)