Perth hardcore/nu metal beasts  生 Conform 死 blew minds with their Circa ’94 album when it released in May. With hints of Gorillaz, Nirvana, use of samples, and potent lyrics, they may have also left listeners curious about the inspiration behind the album’s ten tracks. There’s a lot going on on this album, with various influences and subject matter showing up throughout. We asked 生 Conform 死 to share the inspiration and meanings behind the songs and this track-by-track rundown is what they came back with.

Inspired by Nirvana and Sworn In.

Definition: An occasion on which enjoyment or profit is derived from others’ suffering or discomfort.

Existential crisis. Coming to terms with, or dwelling in, the mind set of a hopeless and meaningless existence can lead anyone to some dark places. When you’re in that negative mind set, and everything feels pointless anyway, you might open yourself up to finding comfort or enjoyment in acts that lack empathy or personal morals towards friends, family, or even complete strangers. You may use them for your own gain or simply cause them grief, intentional or not, as a way of coping with your own issues. In a similar regard to people that use drugs as a coping mechanism. It’s never a fix, often only causing larger rips in a person’s life, ostracising themselves further from those whom actually care, and could help them out of their state if given the chance.

We’re no saints, we’ve all used people for our own gain and been used on just as many occasions, but we most despise the people that won’t admit or take responsibility for the harm they continually cause others as a way of finding enjoyment in their bleak existence in order to deal with their own inferiority.

“‘Cos I’ll be damned If I ever see the day where I don’t feel like shit,
these vicious thoughts have opened my eyes,
to what pain and suffering is”

Inspired by A Serbian Film and Dark Souls III.

About us dying to Aldrich in DARK SOULS III and getting fucking mad because it’s bullshit but also one of the best games/series ever made (apart from Bloodborne of course).

“Can’t sleep each night I wallow in my own pity,
my fate intertwined with choices I hate myself for
but I choose to blame my circumstance but I brought this on me”

Inspired by System of a Down.

For a majority of human history we didn’t have access to personal technology (ie. phones) that we have today. Way back when, bonding with other people through face-to-face interaction (socialising) was the most common form of interpersonal relationship building we would undergo. Simply finding happiness, consolation, and comfort in a friend or a lover.

Now that we do have access to these distractions, we can easily neglect parties, social interaction in favour of a night spent in bed finding comfort in the glow of our consoles and screen, but it is when we shut off the screen that we find ourselves left with a purposeless, unaccomplished feeling. Although we may be attracted to and find enjoyment in these pass times, they can never organically reciprocate the emotional bond the way another human can. When we tell ourselves we don’t want to go out and that we are fine on our own, we are only lying to the very nature of our species.

“I’m fine on my own, with all of my demons,
the ones that I know, I can cram down below”

Inspired by Notorious B.I.G and $uicideboy$.

Although Blood Eagle is wide open for personal interpretation and littered with jabs at various things we despise, the roots of the single’s initial theme stems from our love of the show “Vikings”. We noticed how the main character becomes increasingly frustrated with being stranded in one location and related that to our own frustrations and the excuses we make for not progressing forward in our own lives. Lying to ourselves to remain comfortable.

Inspired by the bands Thy Art Is Murder and Limp Bizkit.

Playing music and being in a band is the shit! Right?

It’s true that very few feelings come close to that overwhelming rush you get when playing a bunch of songs, that you probably wrote in a mate’s shitty bedroom, to a crowd of people you may have never met before and having them get just as rowdy as you’d hoped, when you were nit-picking over it.

Some shows go better than others, and some go utterly terrible. Some bands lose that drive to keep going and inevitably fade out of existence.

A majority of the band members can sell their instruments and move on with their lives quite easily if they wish, but as a vocalist, you have to put your instrument on the line every single show and when you ‘break a string’ it’s not such an easy process to fix it.

So, when a band you’re in begins to lose traction, all the money you’ve invested, all the shows that made you play your heart out and all the following days that you spent resting your instrument, hoping that you’d have a stronger or even just a usable voice by the end of it all, starts to feel like a complete waste, it’s disheartening at the very least.
After four years in previous bands Troy found himself in that exact disheartening spot when he was approached by us.

Troy jumped in halfway through the recording of the first release ‘Vol I: Cigarette Lullaby’ in 2016, and he had to adapt quite a bit from his previous band’s style, pushing himself to what were his limits at that time. Surrounding that release, the shows we played had been “the best shows I’d ever played” – but unfortunately, he pushed himself too hard at a recent show and caused some damage. On the bright side, it was our last show for quite some time and he had about 6 months of rest ahead of him.

Two years after joining Conform, he was skeptical on whether or not to put himself through that financial, mental and physical burden again – but from the moment Jez (guitarist/producer) and Troy started tracking, he felt the growth his voice had undergone and he knew he had to stick this through.

“The songs on Circa ’94 are the best that I’ve ever been a part of and ‘Six Years, Sick Fears’ pays ode to that and to every vocalist that has ever put their voice on the line to create music they are passionate about.”  - Troy Van der Meer

Inspired by the bands END and Metallica.

Comparing our own lifestyles to that of typical Soundcloud rappers who have made a few million bucks and flex their money/clothes/cars/mansions online to their followers. Also about how it is a popular opinion that these people are seemingly undeserving of the millionaire lifestyle and how they continue to complain after “making it big”. Bullshit aside, this song is primarily about having so much money that it negates normal human responsibility and you feel like your life has no meaning because of it. Life just isn’t fair, deal with it.

“Hate yourself,  Crying depressed on the couch,
Barely slept three hours last night,
What a life digging further and further downward into this dreary spiral”

Homicidal and suicidal thoughts relating to boring romantic relationships. Straight garbage.   This song was mostly a warm up for the clean intro of the next song since going from Yellow Jacket to Gaslight just didn’t work.

“I’ve been plotting something new,  Something not involving you”

Inspired by the bands Structures and Ocean Grove.

The easiest way to avoid torment from your romantic partner is just by plainly not having one in the first place. Forfeiting and masking that mind set of purposelessness with a one night stand just to realise nothing has changed. You’re still empty. You’re still disgusting. You’ll still beat yourself up.

“Your knuckles full of the shards of my teeth,
My lungs are empty like the rotting deceased,
I grin happy since nobody loves me,
God, I’m so happy that nobody loves me” 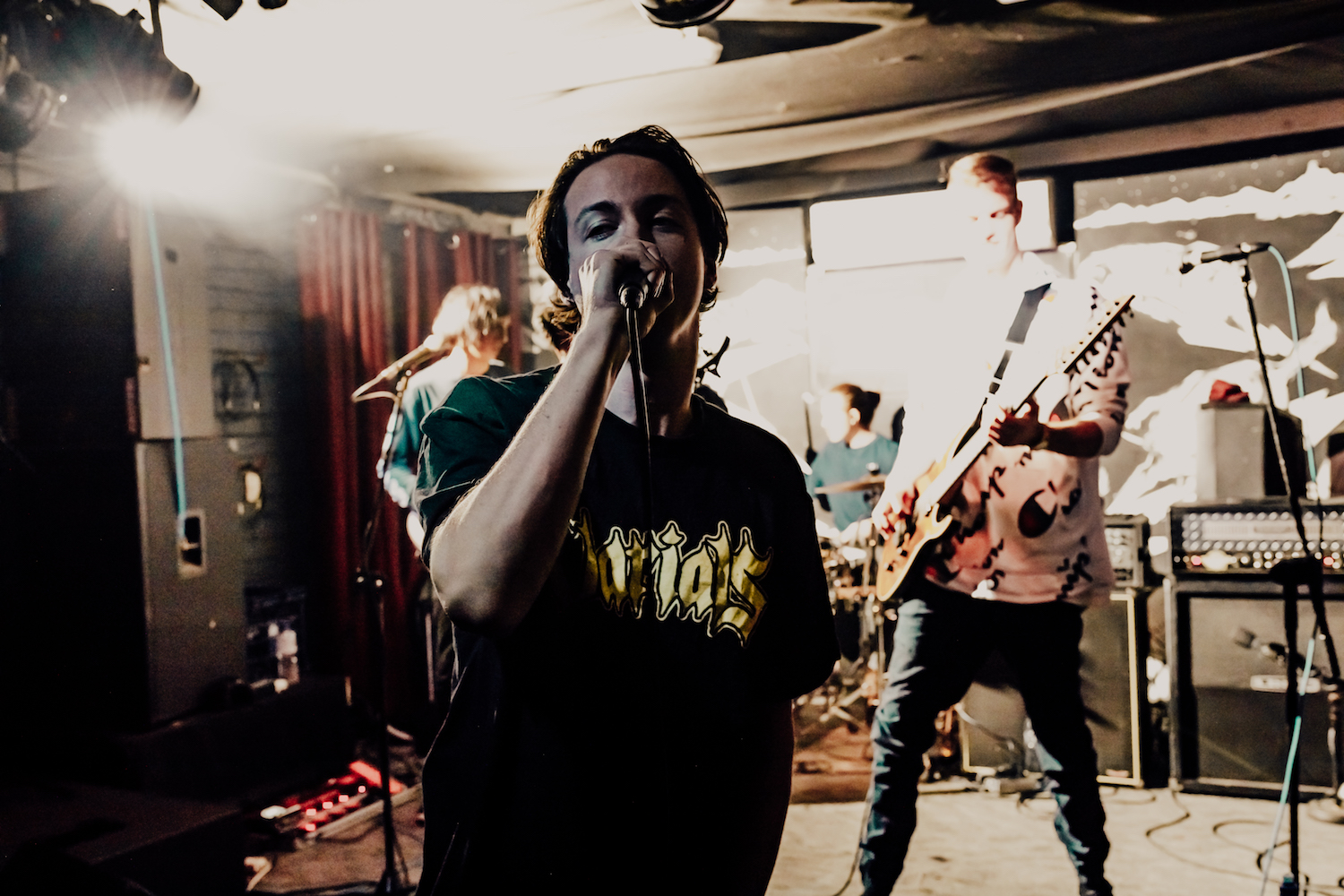 Notoriously infamous people and false idols being undeservingly lifted to a god status after they have died.

“Death has become a spectacle,
Corpses rotting away in golden-plated tin cans,
Made from the wood that’s been ripped from the soil,
Gaia curses your soul”

Inspired by the bands Gorillaz and Malevolence.

No matter how many people hate you, at least you have your snide, antisocial mind to dwell in.

“Cos’ I’m happy feeling mad,  I got sunshine in a bag,
Fuck, you’re useless,  I’ll bite my tongue,  Cos’ my future is dead and gone”

Listen to Circa ’94 via Spotify: