​I was blown away by their set on the Trophy Eyes Chemical Miracle tour, so checking out their latest EP Shape Me was the next logical step. The guys of Ambleside offered to answer my curious questions about themselves as well as Shape Me.

Kel Burch [Depth Mag]: I love the emotional honesty in your music, and you all seem like really happy positive people on stage (floral/Hawaiian shirts might also help with this). Is the music you make with Ambleside therapeutic/healing or at least helps with processing things?
​
Ambleside (Dan): [laughs] Yeah I would say we generally like to have a positive vibe hanging around us, especially when we are paired with our good pals in Trophy Eyes! The music that we make is definitively an emotional release, and for me there’s nothing more therapeutic then seeing other people, friends or strangers, relate to it so much that they are at the front of the stage screaming the words back at us. It’s a very overwhelming 20 – 30 minutes to say the least!

​
KB:Is Shape Me significant of (trying to find the right words) being shaped by life experiences that you share lyrically on the EP? Growing through the experiences?

Ambleside (Dan): That’s exactly what Shape Me is. Every song on the release lyrically is about a significant moment in life that I have struggled to get through. Writing about these situations has not only helped me through genuinely processing some of these issues, but also helped me heal and therefore molded the person that I am today.
​
KB: Also the imagery of the man coming through the square, is this a play on breaking through into something new?

Ambleside (Dan): The imagery on the cover of Shape Me in its simplest form represents a fresh outlook. Using what we have experienced in the past to better ourselves.
​ 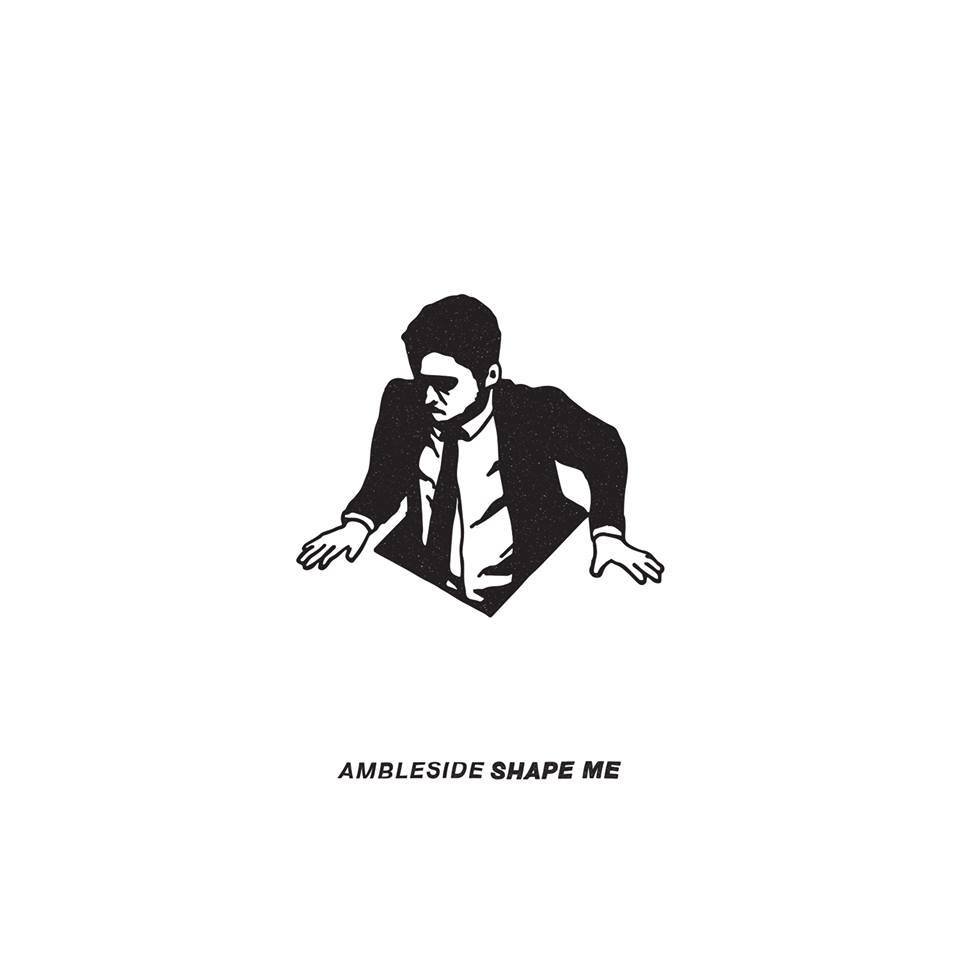 KB: I just saw the promo video for Shape Me. A whole lot of love and effort has gone into this! So in that video, and the symbols and searching, it felt like a journey through these experiences to reach that new or better identity?

Ambleside (Jackson): After we came up with the Shape Me concept of reflecting the past to create a fresh perspective, I really wanted to have a video that gave people instant insight into what to expect by summarizing it through visual interpretation. I guess it’s also to show that it’s the start of a new beginning/journey and not necessarily about resolve.
​
KB: I just saw that you recorded Shape Me in Thailand! What was the experience like for you all?

Ambleside (Jackson): I’d say easily one of the most fondest memories I hold to date personally. We had previously self produced our previous releases so going to a world class studio that also felt like a luxury resort brought upon all kinds of overwhelming emotions. I regularly reminisce how good of an experience it was.

KB: Talking about the tracks on the EP now, “Good Enough?” has such a potent message in it. Does it relate to those inner/early versions of us that get wounded and carry it around with us as adults? It reminds me of kids who go off the rails because of growing up in tough home situations.​
​
Ambleside (Dan): “Good Enough?” is exactly that. I’ve watched some very close friends grow up in dysfunctional or broken homes and seen first hand that feeling of helplessness or emptiness never seems to leave for good. “Good Enough?” is written about the burden that can be carried around from a young age that you will never be good enough for things to change. I’d hoped that it could be a reminder that you are in control, and it doesn’t have to last forever.

KB: Dean and Daniel’s vocals feel like they make a really good team, so to speak, was that something that worked from the start or something you’ve had to work at?

Ambleside (Jackson): Before Ambleside existed Daniel, Ash and myself had been doing the band thing together and having variety is always something we’ve loved trying to achieve. Once Dean joined we had a clean singer so we naturally just started writing parts for both vocals. ​

KB: I got curious about “Wash Away”. It feels and sounds like someone calling out for someone they love to go through a healing process with the lyric ‘let it rain and wash away’, but with the call for ‘bottle up the pain’, I’m not entirely clear how that fits. Could you fill in the blanks for me?

Ambleside: ‘Bottle up the pain’ is a call for the person who the song is about to take everything that is holding them back and work through/let go of it all at once. The song was aimed at a specific situation where said person had bottled up so much anger and pain that we felt the urge to write about them working through it, hoping to make the best of what was left of the situation they found themselves in without forgetting both who they are/were and who we are/were at the same time – hence ‘don’t forget my name’.

KB: I hope the person recognised the care you were sending their way. Can we also talk about the guitars on “Wash Away”?! They are insanely good. A friend described them as ‘crispy’, how would you guys describe them?

Ambleside (Jackson): Ooooooo crispy!! Just like that mouth watering first bite of a Kettle’s Chilli chip, I can vibe that! It definitely ended up polishing nicely in terms of tones for this track. Ash and myself stayed up for hourssss in a skype-like session with Shane Edwards from Karma Studios in Thailand trying to mix it. It definitely proved to be the trickiest song on the EP to feel completed.

KB: Ash has done an exceptional job on “Wasted”.​ It’s impressive too in the way that the drum ‘assault’ feels like the pressure of life and adds to the lyrics by way of being stuck in a state of nothing, and life slipping by. Is “Wasted” talking about depression?​

Ambleside (Dan): The lyrics in “Wasted” were written from a pretty low place and touch on the heaviness of depression, which is usually when I will turn to writing. It also touches on the theme of turning towards substance to get away from it all.
​
KB: The drenchedness (for lack of a better description) of the ‘it echoes and bleeds out’ part is beautifully done to show that heaviness. Yet another impressive track. ​
​
“Forgive Me, Pt. 1” is such a heart heavy track to me. As well as being intensely amazing musically. To me it’s clear that this is a whole lot of frustration toward a ‘past self’ that screwed up or made some bad choices. Would you like to share more on this one?

Ambleside (Dan): Putting it shortly, “Forgive Me” is an apology and a plead for forgiveness that I’ve never been able to make. In a matter of speaking, it was the first I’d expressed any of these feelings outside of my own head. The more I wrote down, the more I remembered, and the more anguish I felt toward my former self. It was written from a place solely of regret.

KB: There’s so much pain in this one. You guys have expressed this so beautifully, that introspection as well as the pain.​
I am relatively new to this genre and I’m constantly impressed at the ‘realness’ of the music that’s shared. Do you ever feel uncomfortably vulnerable with some of the things that are shared?​

Ambleside (Dan): Oh definitely! I think for all of us, Ambleside is used a huge emotional release. A lot of the lyrical content on Shape Me tend to be touchy subjects for me. Often times it’s very confronting and I feel super vulnerable sharing what I do. But at the same time it’s relieving to get off of my chest.
​
KB: “Dear Mother” is one of those very vulnerable tracks. It feels like an inherited approach, where avoiding difficulty seemed to be the only way that was demonstrated and learned. Is this something close to home?

Ambleside (Dan): I’d say “Dear Mother” is definitely the most personal track off of the release for me. It’s a song I was always afraid of showing the rest of the band let alone the rest of the world. The music to this track was actually crafted around the lyrical content and I’m glad we were able to portray it the way that we achieved.
​
KB: It definitely makes perfect sense for this track to have such ‘raw’ vocals, as well as the rain sounds, and the sweeter/softer guitar and drums and open spaces sound-wise. That’s not really a question, more an acknowledgement.

KB: ​”Free” is such a powerful ending for Shape Me. It really has that sense of ‘We’re all in this fucked up journey together’ and we might as well have a good time. What’s this one mean to you guys?

Ambleside (Jackson): I guess “Free” is dedicated to the gratitude that we gained from our New Tide tour. On this particular tour we met nearly all our closest friends around the country and I guess we just wanted to express how much of a good time it all was for us. It acknowledges our past actions and how we now have to deal with all the struggles that come with being in a committed touring band.
​
KB: I love the ‘so we will sing’ part, it feels really unifying.​ The guitars of “Free” are amazing! Especially after the “When I am old, fragile, worn and beaten / No regrets will fucking reach me”.
​
You guys seemed to have had an amazing run with your shows on the Chemical Miracle tour, what was that like for you?

Ambleside (Dan): Personally, the Chemical Miracle tour was such an overwhelming experience to be a part of. To have the chance to watch our very good friends in Trophy Eyes play a sold out tour to full venues singing the words to every song in their set was so humbling. We had toured with them a couple of times in the past and have watched them grow so much as a band. It was something I will truly never forget.​ For Ambleside, it was an amazing opportunity to play a bunch of sold out shows to a whole load of new faces who had probably never heard of us!
​
KB: And now you’re headed out again with Belle Haven and Deadlights! We can’t wait. Does it feel like you are gaining more momentum as a band? You have fans in Sweden, just so you know!

Ambleside (Jackson): Coming off the Chemical Miracle tour left us with a sense of momentum and progress. It was just unreal. It left us super inspired and having toured Shape Me a number of times now we kind of said like, ‘no more tours, lets focus on putting some new music out’, but hey things change, see you all in June pals! Hi Sweden!

KB: My last question would be are you guys working on new music?

Ambleside (Jackson): Lets just say we are thinking its time for an album huh?

Thanks Ambleside! Check out Shape Me and follow Ambleside on Facebook or Twitter to keep your finger on the pulse of what the guys are up to.

Ocean Grove - What I Love About A Natural Woman (Track Of The Day, 14th June)