Sadly I never had the pleasure of meeting Sean Kennedy; the bassist of Deez Nuts and I Killed The Prom Queen who passed away in February this year. The impact that his life had upon his friends is what reached me, leading to having a conversation about him with his good friend, songwriter Matthew Gravolin. Agnes Manners’ One As Beautiful As You two-track EP releases today, and it is directly inspired by Sean’s passing as well as being a capture of Matthew’s life and what it was like to be Sean’s friend.

Befriending members of bands from playing or touring together over the years, Sean touched many people in the heavy music scene with his infectious, playful spirit. “His reach was so far,” shares Matthew. “He was a celebrity in his own right. I’ve had messages from fans of his in the Deez Nuts and I Killed The Prom Queen listenership that would just reach out to me saying how he’d had a profound effect on them, just through his stage presence alone, which is such a beautiful thing.”

Wishing I’d had the chance to meet him based on all that has been shared on social media since his passing, Matthew added “He was just very caring. You felt safe when you were with him. You didn’t need to mince your words about anything. There was a lot of comfort in his company, and that’s certainly what I miss most about him.”

With his usual sense of care and respect and meticulous attention to detail, Matthew was cautious in the crafting of the two new songs. He felt that he wanted for Sean to have been approving of everything that was said, and he was confident that he accomplished this. It’s no easy task handling a delicate situation with care and privacy, while still giving meaningful resonance with friends of Sean, and also allowing for transparency enough that listeners are able to connect with the music.

The EP’s first track “Quiet Ire” was written prior to Sean’s passing. Matthew says “A lot of us were worried. For awhile he had seemed as though he was unable to get a handle on the way that he was feeling, and it became quite a frightening thing for us. It had seemed as though he’d gotten a lot better and I’d really wanted to show him what I’d done for him, so he would have known just how much we care. Because I guess when you are in the middle of depression and anxiety, you can feel burdensome on other people; you feel like people are sick of your shit. I know that he had worried about that sometimes, and I really wanted to be able to share that song with him when he was better.  And he had seemed better, and then unfortunately he was gone.”

Acknowledging out loud how difficult the experience must be for Matthew, he gave a nod to the ‘extended family’ of people who all loved Sean, and how they have stood (and still stand) in unity in the extended grieving process that has continued to unfold since his passing: “It just helps so much.”

I’ve played the two songs on a loop ahead of the EP release, and Sean’s life and the love people had for him run through the music in a palpable way. The songs are moving, heartfelt, and beautiful, which is Depth code for ‘I cried. A lot.’  First song “Quiet Ire” is a piano centric, sombre track, with a notable absence of singalong choruses that Agnes Manners have delivered in the past. What hits hard, and has stuck as powerfully as any dreamily memorable chorus from the band previously, is the lyric that’s uttered in pared back silence;

When I mentioned the fact that “Quiet Ire” is more ethereal than I’d expected, Matthew says “It’s definitely more of a storytelling thing. “Tell me I can fix it”: I think a lot of people can relate to that person in your life that you want to be able to help, but you just don’t know how, and they’ve got to let you.”  Sharing that it was originally more lyrically verbose, Matthew feels that those six words perfectly express the desire to be let in. And I agree, it’s a definite ‘wow’ moment of impact that strikes from the first listen in its simplicity.

That ethereal feel of “Quiet Ire” oozes through the silvery quality on the vocals that gives a haunting feel, which Matthew credits to producer Callan Orr. “Cal really nailed the way that that feels, because all I had were these chords that I’d written on a guitar and then transcribed for a piano. And it’s all very simple. It all takes a back seat in order to better tell the story. That’s why it’s so sparse; the lyrics are meant to be heard.”

Both “Quiet Ire” and “Free (SKF)” come with the approach of storytelling which pulls the listener into the real life moments of worry, joy, and trepidation. The real life factor is also why One As Beautiful As You features a celebratory high in second song, “Free (SKF)”.  The essence of freedom relates both to Matthew’s experience of new romantic relationship at the time, as well as feeling that Sean is finally free from battling his longstanding mental health demons. Matthew says, “If there’s a silver lining to be had, it’s that he’s free of that.”

This juxtaposition of low and high with the two songs captures the suddenly shifting moment in time for Matthew. He says “I thought that Sean was doing quite well. We were all sort of thinking that he was out of the woods the the way that he’d been feeling, and life was moving on as it usually was. And I’d just met Jess [Matthew’s girlfriend] and started falling for her very fast. I’d begun writing “Free” and I was loving the song, and then Sean had passed midweek of my first week of being with Jess. So yeah, I was going from this really soaring height to this really crushing low.”

With recording time already booked, and not being in a position to reschedule, Matthew says that Agnes Manners collectively felt that they had to honour that time. “And I couldn’t think about anything else but Sean. I thought with the way that “Free” was sounding, I was like ‘This is something Sean would have liked, the way the chords are and just the sound of the guitars.’ It was very to his taste. This melancholy leaning toward happiness sort of vibe was his thing.”

Not wanting to have a ‘mournful, sad, dirge of an EP’, Matthew says “I’d rather celebrate him as best as I can, and pick up from where I left off with Jess and just talk about how this week has been in chronological order. Like, just let it be my experience. I don’t need to speak for anybody else.”  Matthew describes the experience of making the song as a grieving process; in honouring Sean, and coming to terms with everything that was happening while writing it.

One part of “Free (SKF)” talks of Sean’s jokes, and Matthew shared the relevance of this, laughing at the thought. “He had a very specific way of telling bad jokes. He just had such a penchant for it and it was just his thing. He liked to make people feel a little bit awkward as well. Sometimes there was a brief awkward silence in a room and he’d exacerbate it by telling a really dry, bad joke. And you weren’t really sure how to react, and it’d stun people a bit further.”  Matthew also adds that “Any happy days, he was very fond of his hair. [laughs] That was his best asset.”  He hopes that these references give people that knew Sean a laugh. 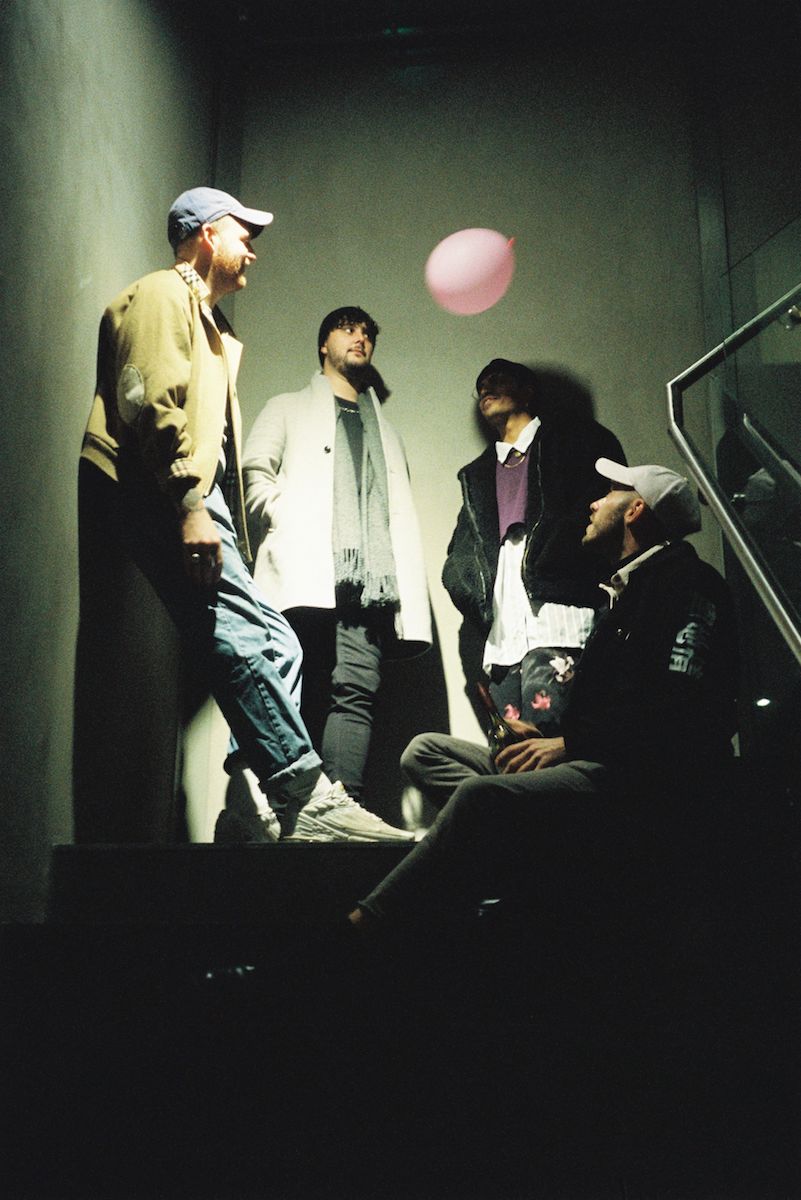 In contrast to past verbosity from Matthew’s pen, the simplistic force of moments like “Holy shit, is this it?” and “Fuck this” in “Free (SKF)” capture the impact of both the “at the altar of her smile” kind of immersion that comes with newly blossoming love, and also the harsh and earth shattering impact of news that no one wants to hear. Despite being a fan of Matthew’s flowing verbosity of the past, the emotional experience is as full and authentic as ever.

With this incredibly tough subject matter, Agnes Manners shine in this new release, with “Free (SKF)” lending buoyancy with colourful and celebratory harmonies toward its end. Bassist and vocalist CJ James is a standout with his high vocal contributions, showering angelic beauty upon the looping lines of “SK forever” which intertwine with variations, such as “The beautiful Sean Kennedy”.  Matthew says that CJ’s voice “knows no bounds in terms of height of tone. He’s incredible. And he does have this beautiful feminine quality to his voice as well. He’s wonderful.”  CJ had written harmonies and nuanced layers for “Free (SKF)”, introducing a new harmony with each iteration of “SK forever”. Listen closely, it’s a treat.

The two-song remembrance has been enhanced by the AV Club music video for “Free (SKF)”. With glowy and rosy night wandering, darkened stillness, imagery of Agnes Manners in action, and more, all interwoven with footage of Sean – it’s a perfect way to visually express the song and its sentiments. With this story then seen, heard, and felt, it’s easy to be moved. Again and again.

Watch “Free (SKF)” below, and stream One As Beautiful As You now via your preferred streaming service.