What’s more intense than one angry Mexican? Try A Gazillion Angry Mexicans! 😮 However many that even is, it sounds like a LOT.

The Melbourne four piece were last on the scene having released a self-titled EP in 2016. They are now back with a new track, as well as an Australian tour.

“ALL MY FRIENDS ARE DEADDD!” the track begins with a shout, and you’re already engaged and wondering where this story is going. Brace yourself because A Gazillion Angry Mexicans’ “All My Friends Are Dead” is a world-rocking epic adventure of a track.

Layered vocals, sick riffs, and general hecticness make it feel like we’re on an apocalyptic road trip, trying to avoid our own demise and making the most of the remaining moments while we’re alive.

It’s searching, grungey, and the vocals are gritty and eerie. It’s the kind of song you can lose yourself in.

And seriously, if the end of the road has heavy and dragging riffage, as shows up toward the end of the track? Sign me up, because this is incredible. WOW. Couldn’t get enough of this.

Hence why it’s Track Of The Day.

“All My Friends Are Dead” Tour Details: 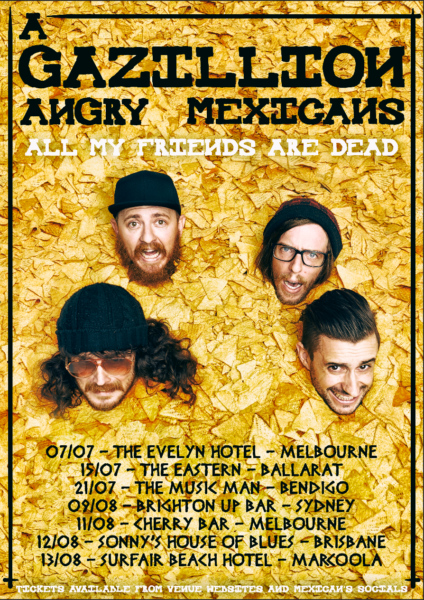